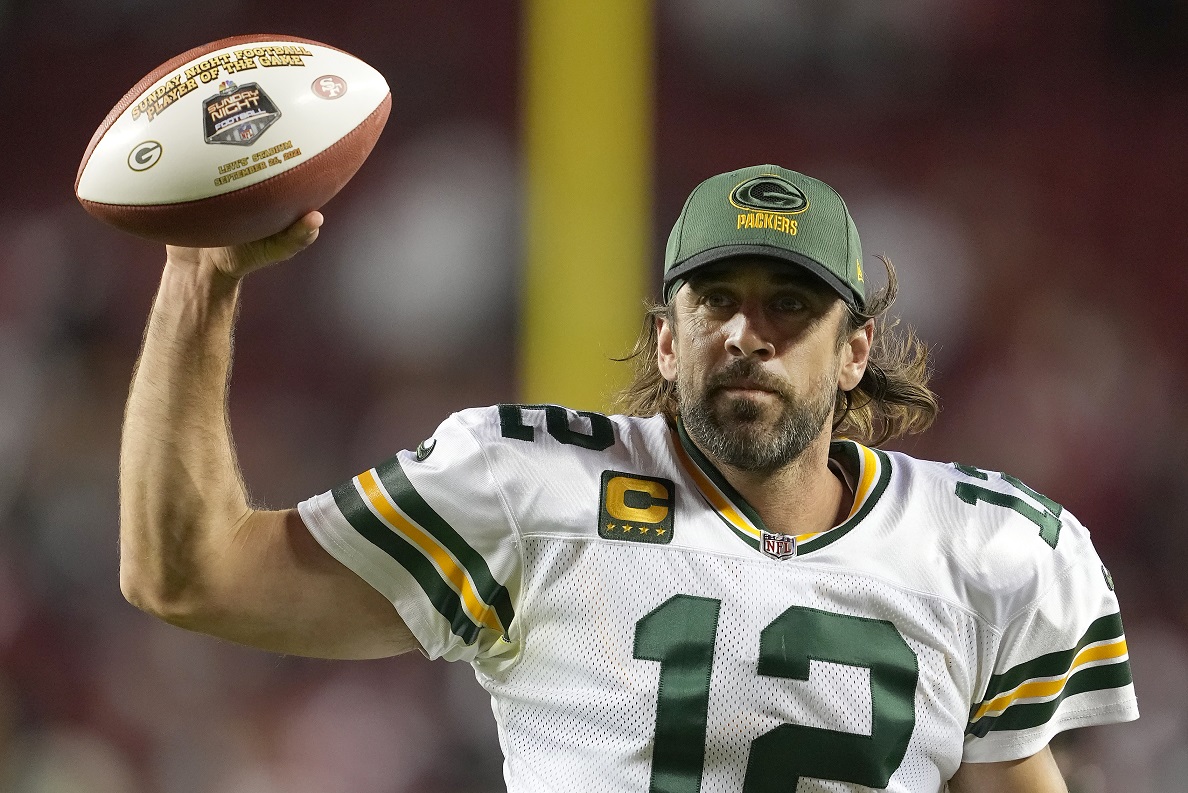 Rodgers delivered for the Packers (2-1) after Jimmy Garoppolo gave San Francisco the lead on a 12-yard TD pass to Kyle Juszczyk with 37 seconds to play.

Green Bay had no timeouts but Rodgers completed passes of 25 and 17 yards to Adams to set up the game-winning kick and a raucous celebration in the end zone.

The comeback spoiled the first game for the 49ers (2-1) with fans since beating Green Bay in the 2019 NFC title game. San Francisco had rallied from 17 points down to take the lead before getting crushed by Rodgers.

Rodgers threw for 261 yards and two touchdowns to lead the Packers to back-to-back wins after a season-opening 38-3 loss to New Orleans. Rodgers had six TD passes and no interceptions in wins over San Francisco (2-1) and Detroit.

The Niners returned home following back-to-back road wins back East but struggled to slow down Rodgers.

Rodgers connected on a 1-yard TD pass to Davante Adams and a 12-yarder in the fourth quarter to Marquez Valdes-Scantling as he exploited a banged-up 49ers secondary that lost two more players to injuries.

Starting cornerback Jason Verrett went down with a season-ending knee injury in the opener and K’Waun Williams (calf) and Josh Norman (chest) left this game in the first half with injuries.

The Packers were dealing with their own injury problems on the offensive line with their top linemen missing with Elgton Jenkins out with an ankle injury and David Bakhtiari on the physically unable to perform list with a knee injury.

Rodgers got rid of the ball quickly to neutralize Nick Bosa and the Niners pass rush and was only sacked once in the win.

The Packers got off to a fast start with scores on their first two drives. Rodgers connected on a 42-yard pass to Allen Lazard on the first drive to set up a field goal by Mason Crosby. Rodgers then hit Valdes-Scantling on a 47-yarder to set up the short TD pass to Adams. Rodgers was 9 for 9 for 127 yards in the quarter.

The Niners avoided being shut out in the first half when they scored on the final play. After Garoppolo got away with an apparent intentional grounding that would have ended the half, Lance came in for his first snap since the opener. He ran behind a big block from Trent Williams for a 1-yard score that cut Green Bay’s lead to 17-7.

Packers coach Matt LaFleur was angry about the lack of the intentional grounding call and gave referee Jerome Boger an earful on his way off the field.

San Francisco then scored on the opening possession of the second half when Garoppolo hit Brandon Aiyuk on an 8-yard TD pass as the Niners scored 14 points without Rodgers touching the ball.

Packers: Adams was down for a few minutes after taking a hard hit from Jimmie Ward that didn’t lead to a penalty. His teammates kneeled near him as he was being treated but he was able to return after missing only one play. … LB Krys Barnes left the game in the first half with a concussion. … DL Tyler Lancaster was evaluated for a concussion in the second half. … WR Marquez Valdes-Scantling (hamstring) also left the game in the fourth quarter.

49ers: Williams (calf) and Norman (chest) left the game in the first half.