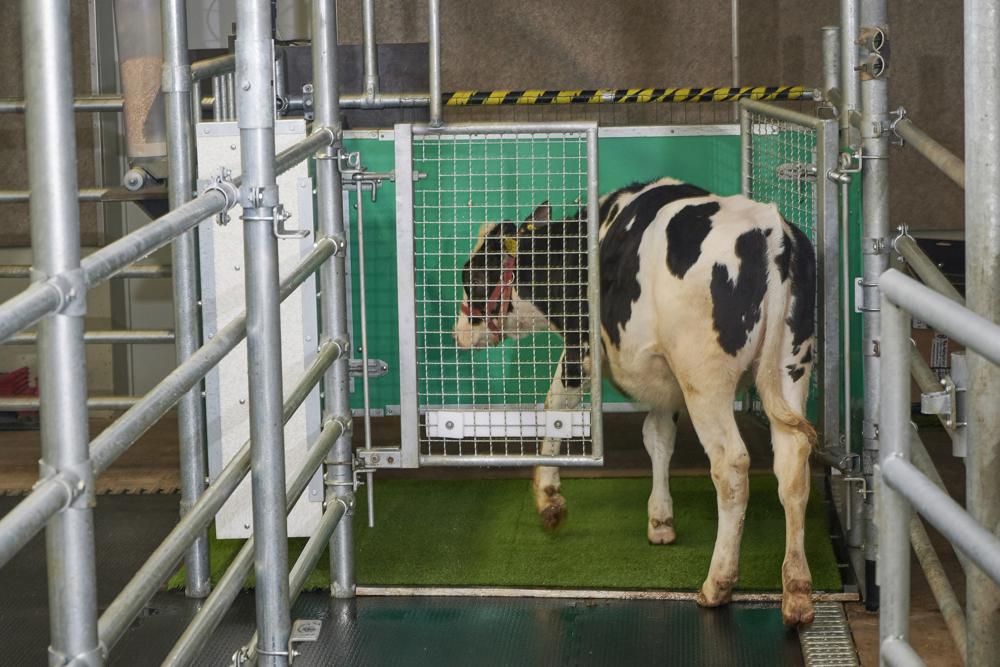 In this undated photo provided by the Research Institute for Farm Animal Biology in Dummerstorf, Germany in September 2021, a calf enters an astroturf-covered pen nicknamed "MooLoo” to urinate. The scientists, mimicking the process of putting a toddler on the potty until he or she has to go, put the cows in and waited until they urinated and then gave them a reward: a super sweet liquid of mostly molasses. (Thomas Häntzschel/FBN via AP)

Turns out cows can be potty trained as easily as toddlers. Maybe easier.

It’s no bull. Scientists put the task to the test and 11 out of 16 cows learned to use the “MooLoo” when they had to go.

Just like some parents, the researchers used a sweet treat to coax the cows to push through a gate and urinate in a special pen. And it took only 15 days to train the young calves. Some kids take quite a bit longer.

“The cows are at least as good as children, age 2 to 4 years, at least as quick,” said study senior author Lindsay Matthews, an animal behavioral scientist at New Zealand’s University of Auckland who worked with colleagues on the tests at an indoor animal research lab in Germany.

What started with a half-in-jest question on a New Zealand radio talk show about the very real problem of livestock waste resulted in a serious study published Monday in the journal Current Biology. And it wasn’t just a “wow, this could be fun” academic question. Massive amounts of urine waste is a serious environmental issue, Matthews said.

Urine contains nitrogen, and when mixed with feces becomes ammonia, which is an environmental issue with acid rain and other problems, Matthews said. It can also taint the water with nitrates and create the airborne pollutant nitrous oxide, he said.

And cows do pee a lot. A single cow can produce about 8 gallons (30 liters) of urine a day, Matthews said. In 2019, nitrous oxide comprised 7% of all the U.S. greenhouse gases, according to the Environmental Protection Agency.

TRENDING NEWS
Black Iowa police chief faces backlash after bringing change
Weather slows wildfire near California’s giant sequoia trees
Boston’s famous Skinny House sells for a nice fat price
Maskless San Francisco mayor bucks health order at nightclub
“I am not surprised they can train calves to urinate in set locations, but I am surprised no one has demonstrated this before,” said Duke University animal cognition scientist Brian Hare, who wasn’t part of the research. “The critical question is can it and will it scale?”

If it could be done, toilet training animals makes it easier to manage waste products and reduce greenhouse gas emissions, said Donald Broom, a professor of animal welfare at the University of Cambridge in England.

At the lab is Dummerstorf, Germany, the researchers mimicked a toddler’s training, putting the cows in the special pen, waiting until they urinated and then giving them a reward: a sweet liquid of mostly molasses. Cows do have a sweet tooth, Matthews said. If the cows urinated outside the MooLoo after the initial training, they got a squirt of cold water.

Then in two sets of experiments, the researchers let the Holstein cows roam about the indoor facility. When they had to urinate, 11 of them pushed into the pen, did their business, and got their sweet reward.

There are a couple caveats to this experiment.

No. 1, they gave diuretics to the cattle to get them to urinate more because they had limited time to run the experiments under ethics guidelines.

And No. 2, they didn’t do No. 2. They only trained cows to use the MooLoo to urinate, not defecate.

Urine is a bigger problem, at least in Europe, Matthews said. But he predicted they could train cows to poop in a certain place too.

While dogs, cats and horses can be toilet trained, they already show the desire to go in special places, but cows don’t, Matthews said.

The biggest environmental problem for livestock, though, is the heat-trapping gas methane they emit in belches and flatulence, a significant source of global warming. The cows can’t be trained not to belch or fart, Matthews said: “They would blow up.”