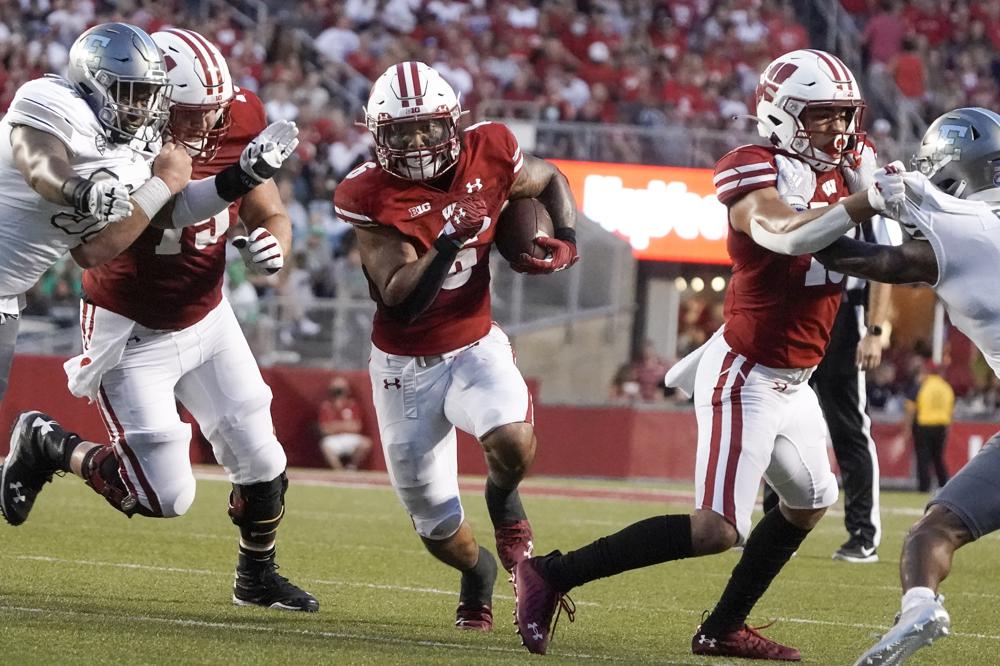 MADISON, Wis. (AP) — Chez Mellusi ran for 144 yards and a touchdown, leading No. 18 Wisconsin to a 37-7 victory over Eastern Michigan on Saturday night.

Wisconsin (1-1, 0-1 Big Ten) piled up 352 rushing yards and also dominated on defense against Eastern Michigan (0-2), which had 92 total yards on offense. The Eagles had three first downs.

Mellusi, a Clemson transfer, became the first Wisconsin running back to record consecutive 100-yard rushing games in his first two contests since Corey Clement in 2013.

The Badgers, typically known for their explosive running, also had breakout performances from Isaac Guerendo and Jalen Berger. Berger, who missed the opener, had 15 carries for 62 yards and one TD.

Guerendo got to the edge and ran 82 yards for his first career touchdown that increased Wisconsin’s lead to 24-0 with 4:40 left in the first half. Guerendo, a junior, posted the eighth-longest TD run in program history.

The Badgers excelled on defense, even though two veteran starters didn’t play.

Safety John Torchio made his second career start in place of senior Collin Wilder, who was out. Alexander Smith was inserted at cornerback due to the absence of fifth-year senior Faion Hicks.

But mistakes, like the ones in its 16-10 loss to Penn State last week, were still frustrating for Wisconsin.

The Badgers failed to score inside the Eagles’ 10-yard line on their first series. Mellusi tripped on a handoff from Graham Mertz on first down and then the Badgers didn’t score on three runs following that miscue.

The lone highlight for Eastern Michigan was a 98-yard interception return for a TD in the fourth quarter by freshman defensive back David Carter, who picked off Badgers reserve quarterback Chase Wolf. The score was a career first for Carter.

Mertz returned in the fourth after Wolf’s interception.

Eastern Michigan: The Eagles need to find stability on offense, and that starts with settling on a starting quarterback. Junior Preston Hutchinson and senior Ben Bryant split time at QB at Wisconsin. The pair combined for 76 passing yards. Hutchinson had three rushes for 16 yards.

Quarterback Graham Mertz completed 14 of 17 passes for 142 yards and no interceptions in three-plus quarters.

SOME BERGER FOR BADGERS

Wisconsin will hold steady or move up a couple spots just outside the top 15.

Wisconsin: Off next week before a marquee matchup against No. 8 Notre Dame on Sept. 25 at Soldier Field in Chicago.