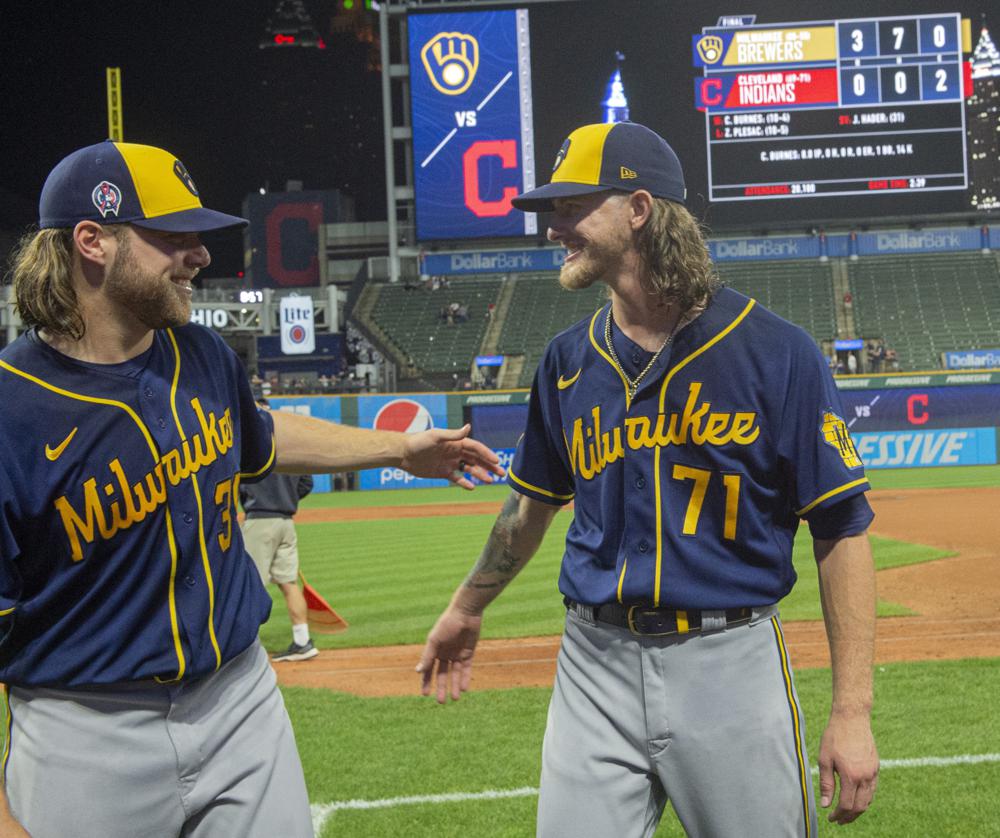 Burnes (10-4) struck out 14 with 115 pitches over eight innings, taking a perfect game into the seventh while overpowering the Indians, who were no-hit for the third time in 2021. This time is was by Burnes — who has become a Cy Young contender as the Brewers run away with the NL Central — and Hader, one of the game’s top closers.

Cleveland is the first team to be no-hit three times in the same year — all of them with starter Zach Plesac (10-5) on the mound.

The right-handed Burnes was in control from the start, striking out 11 of his first 14 hitters and retiring the first 18 in order. After walking Myles Straw to start the seventh, the 26-year-old got through the eighth thanks to a diving catch by center fielder Lorenzo Cain on Owen Miller’s liner.

The Progressive Field crowd booed as Hader came on in the ninth. He overpowered Oscar Mercado, striking him out to start the inning. Then, first baseman Jace Peterson went into foul territory to making a lunging catch for the second out.

Hader ended the no-hitter by getting Straw to flail at a pitch in the dirt. The Brewers stormed the field to share hugs and high-fives with a signature victory in their runaway season.

La Stella’s home run off Tommy Nance in the fifth thudded off Wrigley’s right-field videoboard and capped a six-run rally that allowed San Francisco to pull away.

The Cubs dropped their second straight, and third in four following a seven-game winning streak

Kevin Gausman (14-5) allowed three runs on eight hits, while walking none. Caleb Baragar tossed the final three innings for his second save. Zach Davies (6-11) was the loser.

Trailing 6-2 after being held down by starter Cole Irvin, the Rangers took advantage of the A’s struggling bullpen. DJ Peters hit a two-run home run and Yohel Pozo added an RBI double off Sergio Romo before Heim’s homer on an 0-2 pitch from Andrew Chafin (1-3).

Matt Olson, Starling Marte and Mark Canha homered for the A’s. Leody Tavares connected for Texas in the ninth.

Brett Martin (4-4) retired three batters to win. Joe Barlow pitched the ninth for his fifth save.

BALTIMORE (AP) — George Springer hit a two-out, two-run homer in the seventh inning to lift Toronto past Baltimore in the first game of a doubleheader.

Vladimir Guerrero Jr. hit his 43rd home run of the season to move within one of the Angels’ Shohei Ohtani for the major league lead.

Nate Pearson (1-1) picked up the win with two scoreless innings. Jordan Romano earned his 17th save. Tyler Wells (2-2) was the loser.

Kevin Kiermaier doubled and tripled to help the Rays end a two-game losing streak. Enns (1-0) struck out six in four hitless innings of relief, nine years after being drafted by the New York Yankees out of Central Michigan University.

Detroit’s Miguel Cabrera picked up his 2,974th career hit with an RBI single in the fourth. Robbie Grossman homered for the Tigers. Casey Mize (7-8) was the loser.

Odubel Herrera had a two-RBI bunt double and Jean Segura hit a solo homer to help the Phillies snap a four-game losing streak.

Wheeler (13-9) won his third straight start and tossed at least six innings in his 11th straight start. He left with the bases loaded and two outs in the seventh.