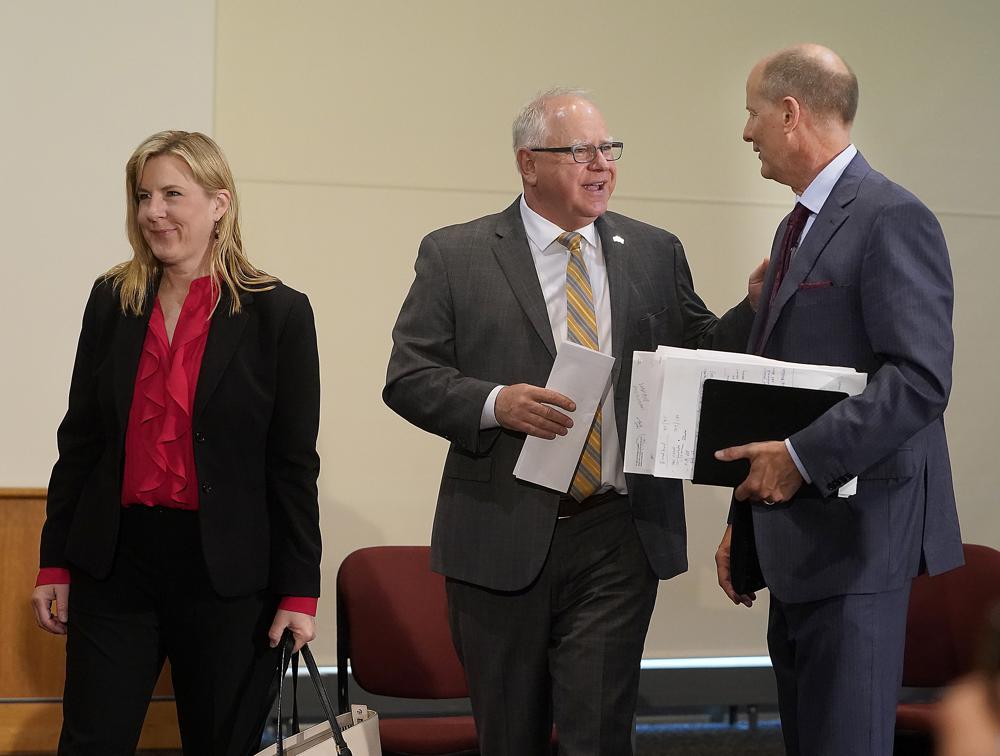 “Tim Walz’s irresponsible shutdown, based on his lack of understanding of the scientific data, closed hundreds of restaurants and small businesses across the state, bankrupting many of them,” Gazelka said at a news conference in the state Capitol rotunda. “His inexcusable absence of leadership during the riots endangered countless families, businesses and communities.”

Gazelka also faulted the governor for closing public schools early last year as the pandemic reached Minnesota and then keeping them closed for most of the school year in the switch to distance learning.

“He failed an entire generation of children by closing schools … putting many of them so far behind that it would be difficult for them to catch up. But I’m saying we’re going to help them catch up,” he said.

Gazelka, an insurance salesman from East Gull Lake, was the state’s top elected GOP official until he quit as Senate majority leader last week in preparation for his campaign.

He joined a growing field of Republicans seeking to unseat Walz if the governor seeks a second term, as expected. Gazelka said he won’t run in the primary without the party’s endorsement.

Former Sen. Scott Jensen, a family physician from Chaksa, has been running hard since March.

They’re all hoping to become the first Republican to win statewide office in Minnesota since Gov. Tim Pawlenty was reelected in 2006.

Gazelka said he plans to do that by appealing to disaffected Democrats on the Iron Range by supporting mining, blue collar union workers who support the controversial Enbridge Line 3 oil pipeline, and suburban and urban voters who want safe streets amid calls to defund the police and more school choices for their children.

Among the supporters joining Gazelka was Sherral Schmidt, president of the Police Officers Federation of Minneapolis, and other members of the union.

While Gazelka attacked Walz’s record on the pandemic, he has his own vulnerabilities there. Gazelka hosted a victory party after the November election at which Sen. Jerry Relph, of St. Cloud, according to his daughter, likely caught his fatal case of COVID-19. Gazelka later caught it, too, but, he said, he has always maintained that the coronavirus is serious.

He said he’s been vaccinated, and believes other people should get vaccinated, too, but shots should not be mandated.

Gazelka noted his record of working across party lines as majority leader, with two Democratic governors, to deliver three balanced budgets without raising taxes. He had a good working relationship with Walz during the governor’s first year, in 2019, but it frayed over the pandemic as Walz increasingly relied on emergency powers to impose restrictions on businesses and schools rather than seeking legislative approval for major decisions.

“Tim Walz says he wants One Minnesota,” Gazelka said, referring to the governor’s 2018 campaign theme. “But I’ve never seen Minnesotans more divided, angry and afraid than they are today.”

Walz told reporters in Rochester that he’s “quite comfortable” with defending his record on the pandemic against attacks from Gazelka and other Republicans. The governor said the numbers show that Minnesota has some of the country’s best records on preventing COVID-19 deaths and infections, reviving the economy, and ramping up testing and vaccinations. He said the debate will be about who Minnesotans think is better prepared and wiling to make hard decisions.

“The first thing I’d say is, why don’t you help me a little bit instead of just criticizing?” Walz said with a laugh.