After 26 years, who takes "Ron Kind's district," and how? 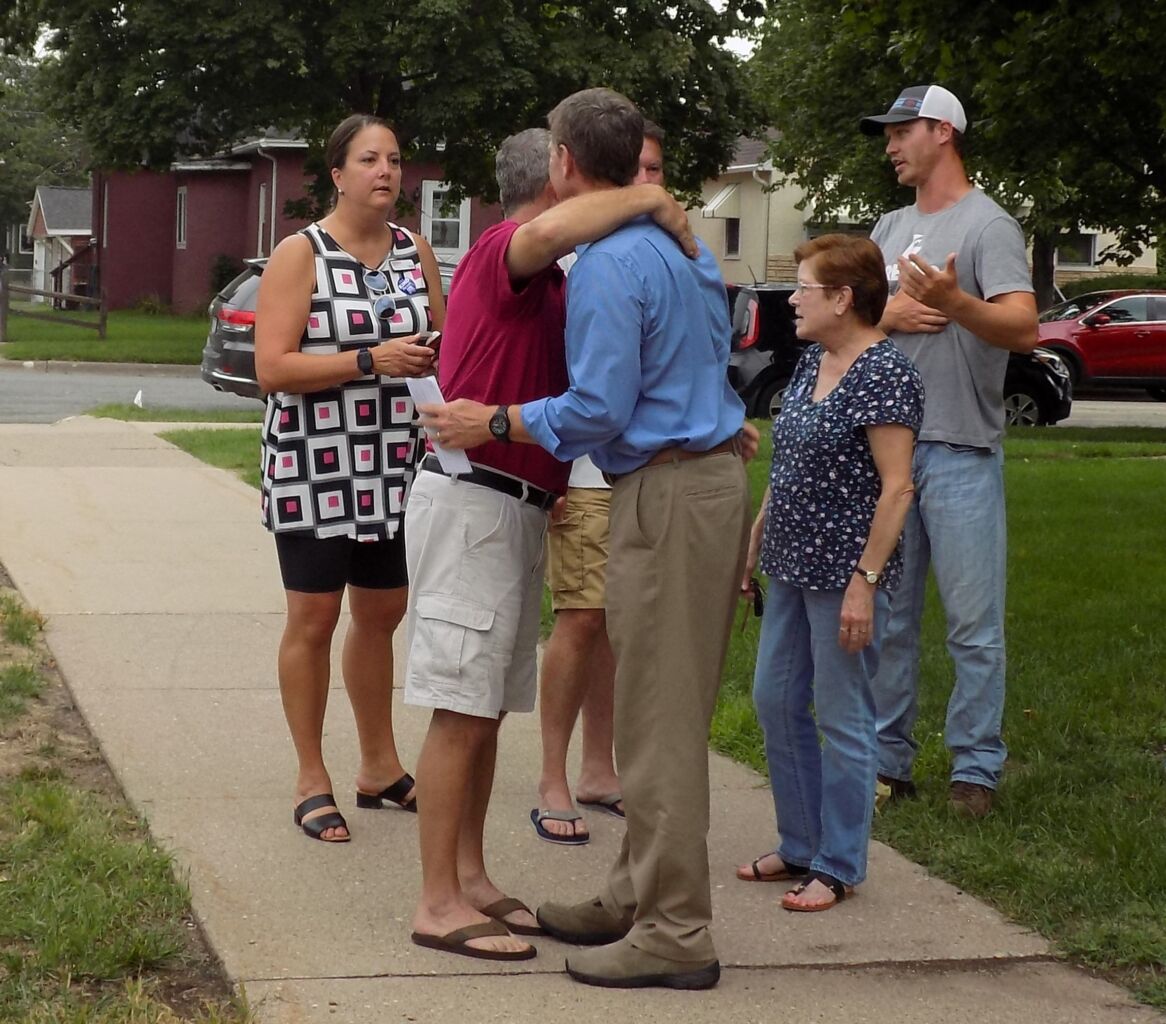 Ron Kind hugs family members on Tuesday, Aug. 10, 2021, after announcing he would not be seeking a 14th term in Congress.

It’s called the 3rd Congressional District, but most living there better know it as Ron Kind’s district.

That changes after next election, as the 13-term Democratic Congressman from La Crosse announced Tuesday he would not seek reelection.

His vacancy leaves a couple of interesting dilemmas for both Democrats and Republicans.

For the left, it’s simple: Who tries to take Kind’s place?

For Republicans, they already have one candidate in Derrick Van Orden. But will there be others? And what will Van Orden’s campaign strategy be moving ahead?

In 2020, all Van Orden had to do was attack the “career politician.”

“He’s certainly gotta change,” Joe Heim, a political science professor emeritus at the University of Wisconsin-La Crosse said Tuesday on WIZM. “He may have some opponent that he can attack but he’s not going to have the same kind of record that he did against Ron Kind — attack, attack, attack.

“For Derrick Van Orden, I think he’s going to have to have a little more of a ‘Why should you vote for me,’ rather than vote against his opponent. He was riding the crest of Trump’s success in this area and I don’t know whether that’s going to repeat in 2022.”

“His strategy is gone now,” La Crosse County Democratic Party chair William Garcia said. “All he has done — if you look at his Facebook page or listen to his speeches — all he can do is lob personal attacks at Ron Kind. He has no ideology. He has no policy.”

Garcia predicts Van Orden may still try and use Kind to win the 2022 election.

“The one thing that Derrick Van Orden is going to try and do — and we’re going to work really hard to not let him get away with it — is he’s going to try and take credit for Kind retiring, saying ‘Kind was afraid of me,’” Garcia said. “And that is just absolute garbage.

“After 26 years serving as a Congress person with distinction, I think the last thing that would drive his decision to retire would be having to face someone as kind of ludicrous as Derrick Van Orden.”

Winning the open seat for either party may take a strategy more in tune with Kind’s over the years, than a far-right or far-left undertaking.

“That particular legacy is important and, frankly, that’s one of the things — at least in this district — that people prefer to have,” Heim said of Kind’s moderate stance. “Somebody that can reach across the aisle and at least attempt to work with the other party.”

But, Heim admits the divisive strategy gets people’s attention.

“It seems like we’ve moved in that direction — more and more negative ads,” Heim said. “We all hate them but yet the psychologists say that we pay more attention to the negative ads. But I would think that, to a greater degree, people would want to hear what you’re going to vote for, rather than against.”

With an open seat, however, and in such a large district, a candidate will likely have to appeal to those undecided, party-less voters.

“There’s no single dominant city like Milwaukee or Madison that controls the media, so this is a tough district to run in,” Heim said.

Garcia agreed that it’s likely going to take someone down the middle.

“The legacy that Ron Kind brings, in terms of his bipartisanship, his willingness to work with either party to get things done for the people of Wisconsin, I think that’s what’s going to come forward in the (next) election,” he said.

But, with Van Orden’s near success in beating Kind, despite his strategy being built mostly on tearing Kind down, Republicans may not try and challenge the 51-year-old in a primary, while Democrats will almost certainly have multiple candidates.

Heim reeled off likely names to replace Kind in state Assembly Rep. Steve Doyle of Wisconsin’s 94th District — the greater La Crosse area — and Rep. Jill Billings of the 95th district, which is made up of mostly La Crosse.

Heim did have others, though none were far-fetched.

“I’ll throw in former Sen. Jennifer Shilling,” he said. “I would bet that, over the years, she’s at least thought about it. If Ron had retired earlier, I think that she would have been a very logical candidate.

“Brad Pfaff, I think, being a new state Senator, I suspect, he would be less likely to consider it.”

The challenge for Democrats will be getting someone with name recognition and, according to Heim, a candidate that can, most importantly, raise money.

“It’s a daunting task to basically get your name out in a district this big,” Heim said. “You need a lot of money. That’s one of the requirements, frankly. You’ve got to be able to show that you can raise money.

“Ron Kind and Derrick Van Orden raised huge amounts of money (in) the first half of the year. (That’s) one of the reasons why a lot of people are surprised that Ron’s getting out of the race — he’s already raising money.”

The two combined to raise $1.2 million in campaign funds in the second quarter, which had already outpaced what was a record for this time heading into the 2020 election.

In 2020’s election, Kind spent $4.4 million, while Van Orden used $1.9 million on the race, according to OpenSecrets.org.