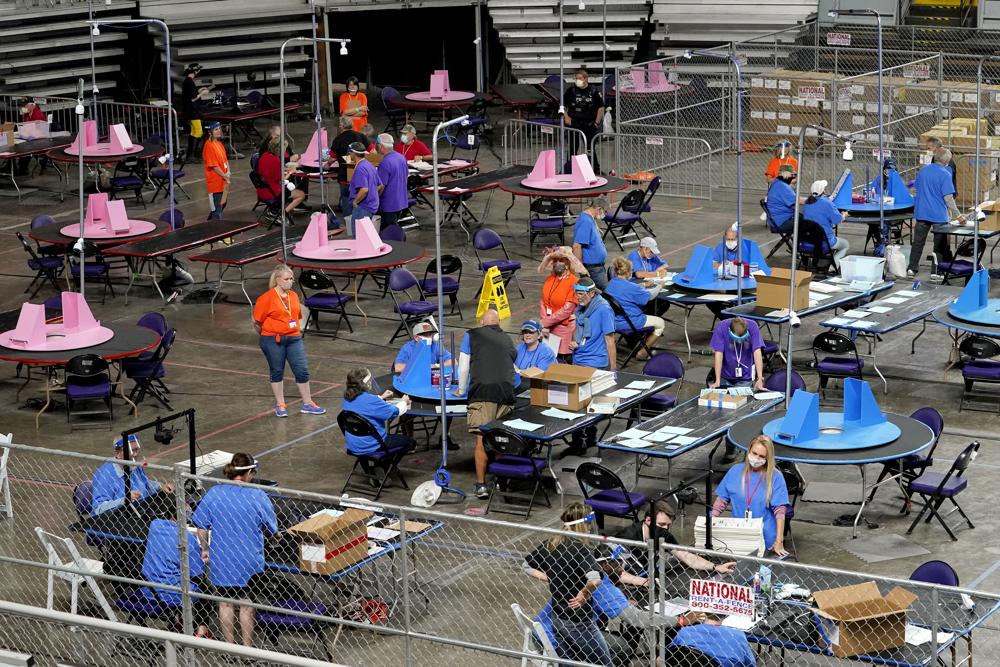 FILE - In this May 6, 2021 file photo, Maricopa County ballots cast in the 2020 general election are examined and recounted by contractors working for Florida-based company, Cyber Ninjas at Veterans Memorial Coliseum in Phoenix. Wisconsin state Rep. Janel Brandtjen has taken the unprecedented step of demanding clerks in two counties turn over all the ballots and voting machines from the 2020 presidential election for what the Republican is calling a “cyber-forensic” review of the results. Brandtjen sent clerks in Milwaukee and Brown counties subpoenas on Friday, Aug. 6, 2021, demanding all the ballots cast in the counties and voting equipment ranging from tabulation machines to servers. (AP Photo/Matt York, Pool File)

MADISON, Wis. (AP) — A Wisconsin lawmaker has taken the unprecedented step of demanding clerks in two counties turn over all ballots and voting equipment used in the 2020 presidential election for what the Republican is calling a “cyber-forensic” review of the results. Here are the key takeaways from state Rep. Janel Brandtjen’s push to reexamine Joe Biden’s victory in Wisconsin.

WHAT EXACTLY DID BRANDTJEN DO?

Court challenges and a partial recount in Milwaukee and Dane counties confirmed Biden defeated former President Donald Trump by about 20,000 votes in Wisconsin. But Trump has refused to accept defeat, demanding Wisconsin Republicans investigate the results. Brandtjen, the leader of the Assembly’s elections committee, issued subpoenas Friday to clerks in Milwaukee County and in Brown County, which includes Green Bay. She demanded they appear before the committee on Sept. 7 and turn over all the ballots and voters’ names and addresses. She also wants their election equipment, from tabulation machines to servers. No one has subpoenaed election equipment before in Wisconsin.

WHY DID SHE TARGET THOSE TWO COUNTIES?

Milwaukee County officials posted results that ultimately catapulted Biden to victory early in the morning after Election Day. Republicans have questioned that timing, though that’s how long it took to count ballots, including thousands of absentees. Biden crushed Trump in that county, with more than 69% of the vote. In Brown County, where Trump actually took 52% of the vote, the GOP also has accused Green Bay Mayor Eric Genrich of letting Facebook-funded consultant Michael Spitzer-Rubenstein run that city’s election, going so far as handing Spitzer-Rubenstein the keys to the city’s ballot counting location. Genrich’s office and city attorneys have said the Republicans’ claims have no merit.

Yes. Republican lawmakers in February ordered the Legislative Audit Bureau to review the election. Assembly Speaker Robin Vos announced in May he had hired a group of private investigators to probe the results. Former state Supreme Court Justice Michael Gableman is leading that investigation.

SO WHY DID BRANDTJEN LAUNCH A THIRD PROBE?

Brandtjen hasn’t returned messages from The Associated Press. But she was among a group of Republican lawmakers who traveled to Arizona’s Maricopa County to observe the audit there. In what experts and critics have called a deeply flawed and partisan audit, Republicans in that state have hired tech firm Cyber Ninjas to examine ballots under microscopes and ultraviolet lights. She returned convinced Wisconsin needs a similar top-to-bottom investigation. She acknowledged the two ongoing reviews in a news release Friday but said the audit bureau is taking too long and the state needs a “transparent, full, cyber-forensic audit.” Her subpoenas also resonated with the far-right faction of the state GOP.

DOES BRANDTJEN HAVE THE AUTHORITY TO ISSUE SUBPOENAS ON HER OWN?

It doesn’t appear so. Assembly Republicans passed a resolution in March authorizing the elections committee to investigate the presidential results. But Wisconsin law clearly states that any legislative subpoenas must be signed by the Assembly or Senate’s presiding officer and chief clerk. Neither Vos nor Senate Majority Leader Devin LeMahieu have signed Brandtjen’s subpoenas. The chief clerks also haven’t signed the documents.

WHAT DOES VOS THINK ABOUT THE SUBPOENAS?

Vos has yet to comment publicly about Brandtjen’s move; his spokeswoman didn’t return messages Friday or Monday. However, he said in July that he wasn’t sure what a forensic audit would prove. Most important, he wouldn’t commit to providing Brandtjen any money to hire technical reviewers. His stance has angered the state GOP’s far-right wing. Hundreds of conservatives held a rally outside the state Capitol on Friday to celebrate the subpoenas, with people holding signs demanding Vos’ ouster.

WILL THE CLERKS COMPLY WITH THE SUBPOENAS?

It’s difficult to say. So far Brown County officials have said only that they’re reviewing Brandtjen’s demands. Milwaukee County Clerk George Christenson hasn’t said whether he will comply with the the subpoena.

WOULD TURNING OVER VOTING EQUIPMENT CAUSE PROBLEMS HEADING INTO THE NEXT ELECTION CYCLE?

Possibly. The next round of primaries occurs in February. No statewide offices are on that ballot, but elections for governor and attorney general are on tap for fall of 2022. Some Democrats have argued that local governments would have to spend millions to buy new equipment to replace gear they turn over to Brandtjen, saying the chain-of-custody would be broken and the machines would be vulnerable to tampering.