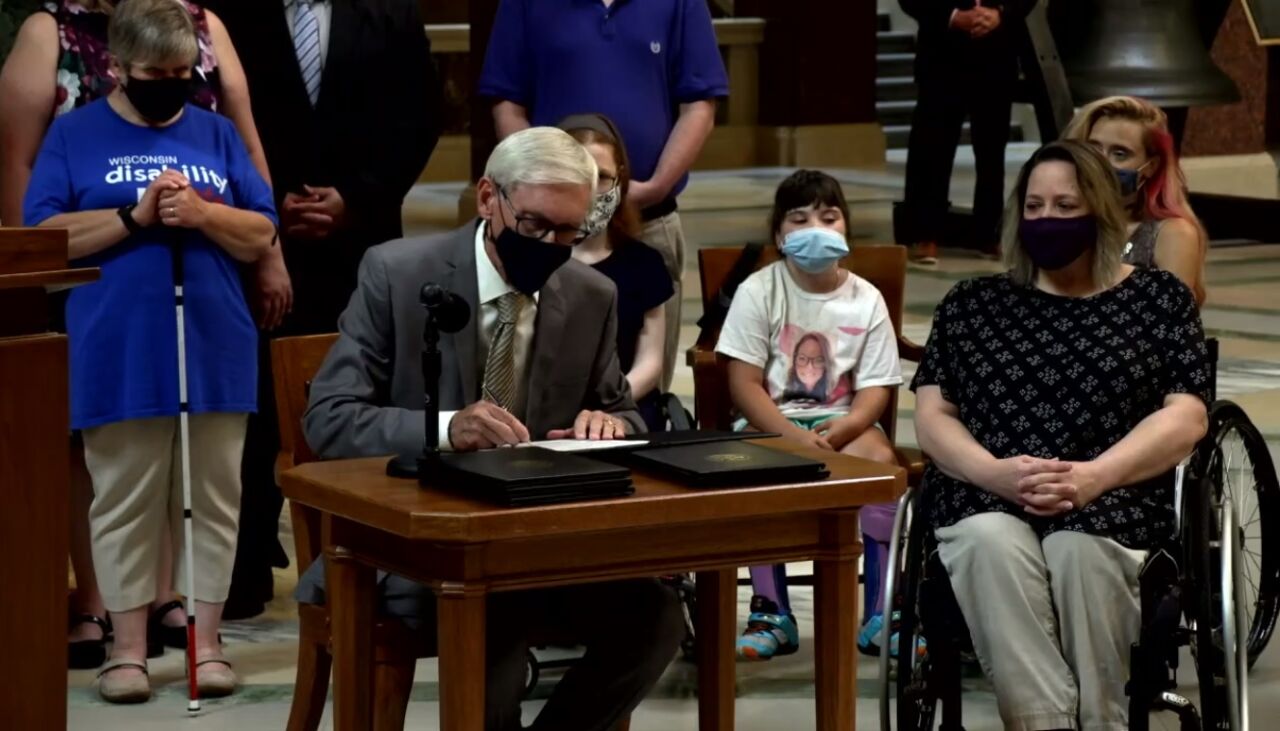 Wisconsin Gov. Tony Evers vetoes Republican bills that would have made it more difficult to vote absentee in the battleground state during a news conference in the Capitol rotunda on Tuesday, Aug. 10, 2021, in Madison, Wis. (Screenshot)

MADISON, Wis. (AP) — Wisconsin Gov. Tony Evers vetoed a series of bills Tuesday passed by the state’s Republican-controlled Legislature that would have imposed new restrictions on absentee ballots in the key battleground state.

The Democrat also said two Wisconsin counties should not comply with subpoenas to turn over ballots and voting equipment as part of an investigation being led by the Republican head of the Assembly elections committee.

“Hell no,” Evers said when asked if the local election clerks should comply. “You’ve seen what’s going on in Arizona. It’s a clown show.”

The Wisconsin bills, and ongoing investigations, are part of a nationwide push by conservatives to reshape elections and voting after President Donald Trump narrowly lost a second term to Democrat Joe Biden. Evers’ veto came as Republicans in Texas moved closer to mustering a quorum to pass voting changes stymied by Democrats fleeing the state.

Wisconsin Republicans don’t have enough votes to override Evers’ veto. No Democrats supported the legislation that passed in June.

Biden beat Trump by just under 21,000 votes in Wisconsin. Numerous state and federal lawsuits brought by Trump and his allies after the defeat were rejected.

Still, Wisconsin Republicans have approved a review of the 2020 election by the nonpartisan Legislative Audit Bureau and Assembly Speaker Robin Vos has authorized a separate investigation led by a former state Supreme Court justice. State Rep. Janel Brandtjen, who leads the Assembly’s elections committee, is also pursuing her own “cyber-forensic” review of the results, with subpoenas to election clerks in two counties that demand they turn over ballots and voting equipment.

Evers said he expected the subpoenas to be fought in court.

“It’s a ridiculous effort to subject our democracy to a new low,” Evers said of attempts by Republicans in Arizona, Wisconsin and other states to conduct forensic audits of Trump’s defeat in the November 2020 election. “We held a fair, free, secure election and Joe Biden is our president. … People need to understand this election is over.”

Evers decried the bills he vetoed as “anti-democratic,” saying they make it more difficult for people to vote — particularly the elderly and those with disabilities. He vetoed the bills in the Capitol rotunda, surrounded by Democrats and advocates for the disabled.

One of the bills Evers vetoed would have required most elderly and disabled people who are indefinitely confined — unable to get to the polls on their own — to show photo ID to vote absentee. Such voters would have to apply for a ballot every year, rather than having one sent automatically. And all absentee voters would have had to fill out more paperwork and show their ID every time they vote absentee, rather than just the first time.

Another bill would have blocked the longstanding practice of allowing local election officials to fill in missing information on the envelopes that voters use to return absentee ballots.

Biden’s victory over Trump in Wisconsin was confirmed in partial recounts that targeted the Democratic-dominated counties of Milwaukee and Dane, where Trump tried and failed to disqualify thousands of absentee votes. Among those Trump tried to throw out were 5,500 absentee ballots where election clerks filled in missing address information on certification envelopes that contained absentee ballots.

A third bill Evers vetoed would have disallowed ballot collection events any earlier than two weeks before an election. It also would have allowed for only one collection site for absentee ballots, located near the local clerk’s office. Republican supporters said the goal was to prevent “ballot harvesting” by disallowing events or locations where ballots could be collected.

The proposal was in response to the Democracy in the Park event held in Madison city parks last year, where poll workers collected absentee ballots before the early voting period started two weeks prior to the election.

Another bill Evers vetoed would have made it a felony for an employee of a nursing home or other care facility to coerce an occupant to apply for, or not apply for, an absentee ballot. It would also require the nursing home to provide notice to relatives when special voting deputies planned to be on hand to assist residents with casting their ballots.

Vos, the Assembly GOP speaker, said Evers made “another momentous mistake” by vetoing the bills.

“These bills closed loopholes, standardized procedures, established uniformity, guaranteed only the voter can correct their own ballot and protected votes of seniors in long-term care,” Vos said in a statement. “I am very disappointed Governor Evers refuses to do the right thing.”