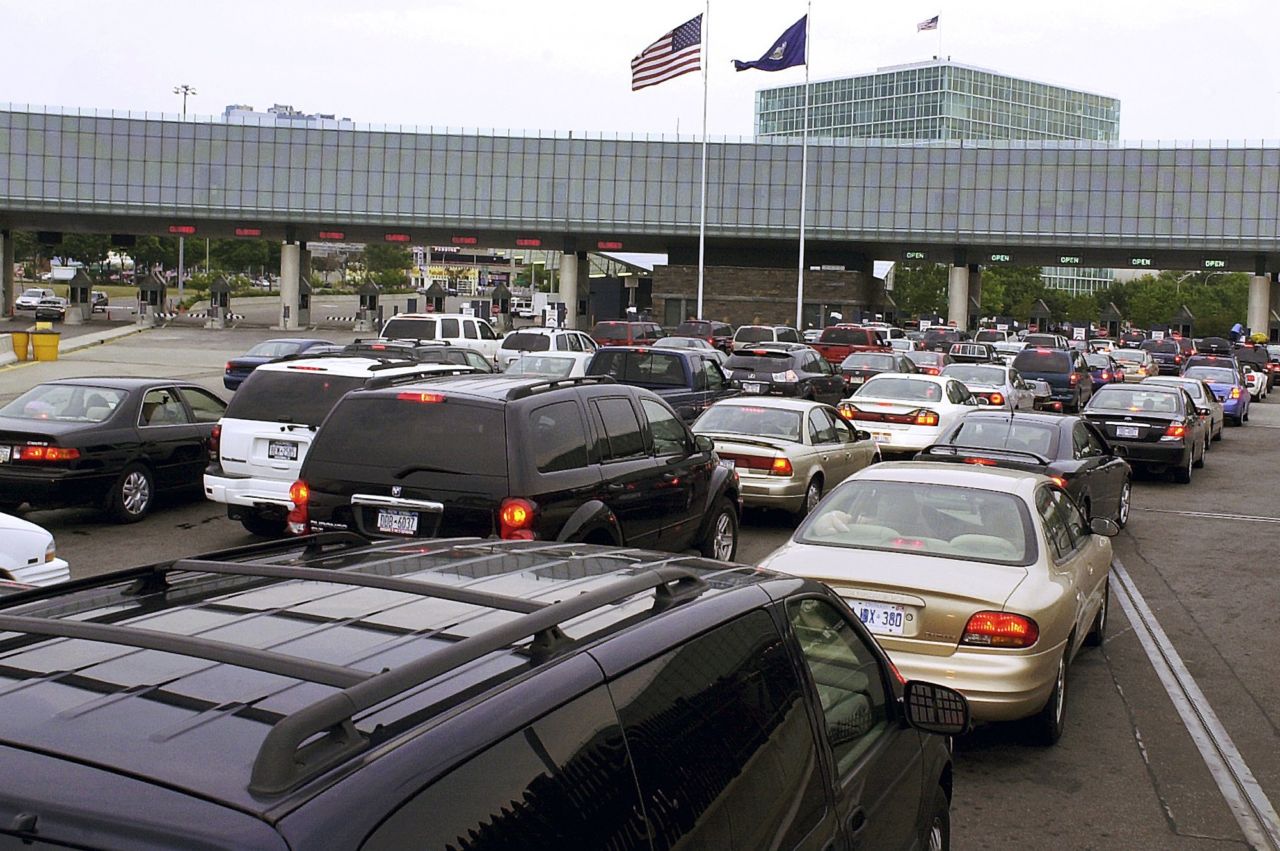 FILE - In this Aug. 4, 2005 file photo, traffic traveling from Niagara Falls, Ontario, Canada, lines up on the Rainbow Bridge to enter the United States through a border checkpoint at Niagara Falls, N.Y. (AP Photo/Don Heupel, File)

Canada on Monday has lifted its prohibition on Americans crossing the border to shop, vacation or visit, but the U.S. is keeping similar restrictions in place for Canadians, part of a bumpy return to normalcy from COVID-19 travel bans.

U.S. citizens and legal permanent residents must be both fully vaccinated and test negative for COVID-19 within three days to get across one of the world’s longest and busiest land borders. Travelers also must fill out a detailed on application on the arriveCAN app before crossing.

Even though travelers have to register, the Canada Border Services Agency won’t say how many people they are expecting to enter Canada for the reopening. But travelers should plan for the possibility of additional processing time at the border.

“CBSA will not compromise the health and safety of Canadians for the sake of border wait times,” agency spokeswoman Rebecca Purdy said in a statement.

While the Canada Border Services Agency won’t say how many people it’s expecting, Garnet Health, an Essex, Vermont-based company that offers same-day COVID-19 testing, has seen the number of tests it performs more than triple in recent weeks. The increase coincides with Canada’s decision last month to drop a two-week quarantine requirement for its citizens when they return home from the U.S.

“I imagine once that border opens, we are going to see lots of people,” said Chelsea Sweeney, the company’s director of business development.

The U.S.-Canada border has been closed to nonessential travel since March 2020 to try to slow the spread of the coronavirus.

The U.S. has said it will extend its closure to all Canadians making nonessential trips until at least Aug. 21, which also applies to the Mexican border. But the Biden administration is beginning to make plans for a phased reopening. The main requirement would be that nearly all foreign visitors to the U.S. will have to be vaccinated against the coronavirus.

Joel Villanueva, owner of Primo’s Mexican Grill in White Rock, British Columbia, about 2.5 miles (4 kilometers) north of the U.S. border, is more than ready for Americans to return.

“Let’s get this thing going,” he said. “A lot of our customers are from the United States, and we are literally minutes from across the border. We welcome our Americans, and we depend on their foot traffic.”

Villanueva said he supports people coming who are fully vaccinated and doesn’t think there will be a rush of Americans initially. But if his restaurant and dozens of others along the waterfront could fill some tables with U.S. visitors every day for the rest of the summer, it would be a big financial boost, he said.

Near the border in Washington state, Blaine Chamber of Commerce board member Carroll Solomon called the reopening a step in the right direction for businesses. But she also said it was somewhat concerning because of an increase in COVID-19 cases nationwide as the highly contagious delta variant spreads.

“For people who need to get up there (to Canada) for family reasons, it’s wonderful,” said Solomon, who also volunteers at the Blaine Visitor Information Center.

With all the hoops people need to jump through — being fully vaccinated, getting tested for COVID-19 and uploading that information to an app — she doesn’t think that people will be going to Canada for many day trips.

“I have a lot of friends on the Canadian side and would love to go have lunch with somebody, but you can’t just do that; you have to plan days in advance to make sure you can get through,” Solomon said.

It’s going to be an event for the Blaine area when Canadians can come down on a regular basis, she said.

As far as returning to the United States from Canada, U.S. Customs and Border Protection spokesman Jason Givens said there’s no requirement to show proof of vaccination or a negative COVID-19 test.

“CBP officers have been processing essential travel throughout the pandemic and remain ready and able to process American citizens and permanent residents returning from Canada,” Givens said by email.

Steve Blake, who lives in Stanstead, Quebec, just across the border from Derby Line, Vermont, is hoping his siblings living in the United States will be able to visit Canada soon so they can hold a memorial service for their mother who died in early 2020, just before the pandemic closed the border. But given the requirements, he doesn’t know how quickly that will happen.

“I’d like it to be sooner rather than later,” he said.