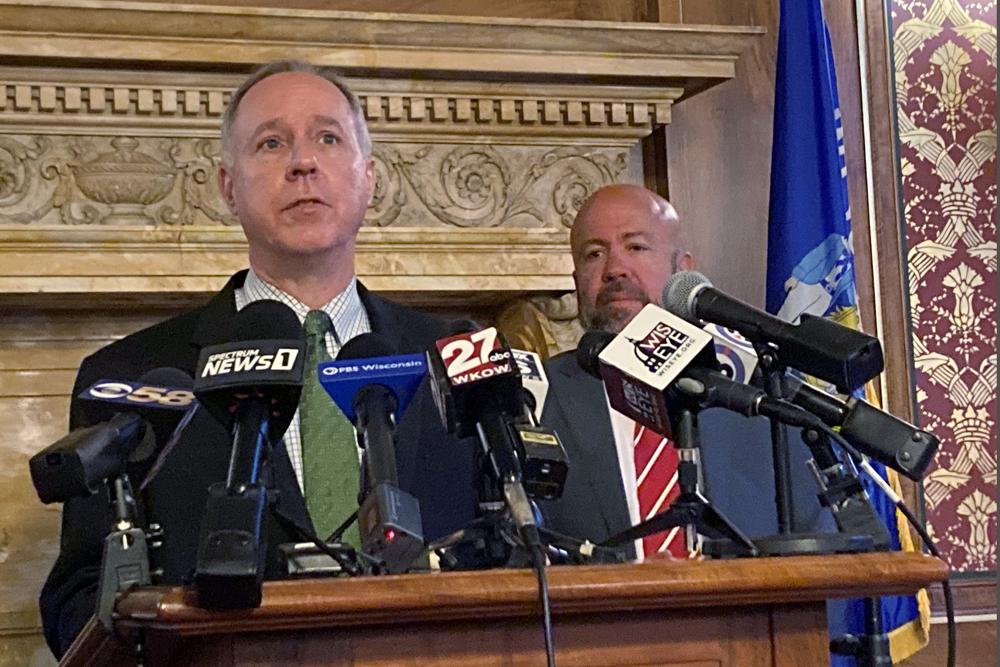 Wisconsin Assembly Speaker Robin Vos, the highest ranking Republican in the state, said he didn't know what a forensic audit of the state's 2020 presidential election results would prove on Tuesday, July 27, 2021, during a news conference in the state Capitol in Madison, Wis. Vos said that two other ongoing investigations were sufficient while disagreeing publicly with a GOP colleague who called for yet another, broader probe. (AP Photo/Scott Bauer)

MADISON, Wis. (AP) — The highest ranking Republican in the Wisconsin Assembly said Tuesday that he didn’t know what a forensic audit of the state’s 2020 presidential election results would prove, saying two other ongoing investigations were sufficient while disagreeing publicly with a GOP colleague who called for yet another, broader probe.

Assembly Speaker Robin Vos also did not commit to providing any additional resources to conduct a “comprehensive, forensic examination” that state Rep. Janel Brandtjen, chairwoman of the Assembly elections committee, called for on Monday. She said her committee would be seeking additional election records soon, but she didn’t give an exact timeline or say who would be conducting the review.

“Certainly, if she wants to add extra resources from her two staff people in the office to be able to assist the investigators that we have … we welcome everybody to offer whatever evidence that they have,” Vos said. “But as far as her launching her own investigation, I don’t know what that would prove.”

The rare public disagreement among Republicans comes as pressure builds from former President Donald Trump and other national Republicans to take a closer look at the 2020 election in Wisconsin, a state President Joe Biden won by just over 20,000 votes. There is no evidence of widespread fraud and courts rejected numerous lawsuits filed by Trump and his allies attempting to overturn the outcome. Democrats have derided calls for more investigations as feeding into conspiracy theories and lies that Trump actually won the state.

Wisconsin Republicans ordered a review by the nonpartisan Legislative Audit Bureau in February. That audit is expected to wrap up this fall.

Its review is not as broad as the widely discredited audit in Arizona conducted by a firm called Cyber Ninjas. That work involved examining ballots using microscopes and ultraviolet lights.

Vos has also hired two retired police detectives, at taxpayer expense, to review the election under the supervision of a former Wisconsin Supreme Court justice. That review will be done by former prosecutors, “not computer science people,” Vos said.

Trump last month called out Vos and two other Republican legislative leaders, saying they were “working hard to cover up election corruption.” The Wisconsin Republicans said Trump was misinformed, which Vos repeated Tuesday.

“We’re already doing the forensic audit,” Vos said when asked Tuesday at a news conference about Brandtjen’s call for such a review. “So just like perhaps President Trump was misinformed about what we’re actually doing in Wisconsin, I feel like my colleague Rep. Brandtjen is misinformed about what we’re doing in Wisconsin because we’re already doing a forensic audit.”

“We have people who are very well qualified to do this work. Let’s give them the time to actually accomplish what we’ve asked for,” Vos said.

Brandtjen, who was not present for an Assembly session day on Tuesday, did not immediately respond to a message seeking comment. Vos said he hadn’t yet spoken to her about her call for a forensic audit.

Trump’s loss to Biden in Wisconsin withstood a partial recount ordered by Trump in Milwaukee and Dane counties, the two most heavily Democratic counties.

There are almost no documented cases of election fraud in Wisconsin.

Two people have been charged with election fraud, out of more than 3 million votes cast in the state, and prosecutors are still reviewing a handful of other cases that were among 27 forwarded to them by elections officials. Similarly, very few potential voter fraud cases have been identified in Arizona, where the type of audit envisioned by Brandtjen was conducted.

This story was corrected to show that Vos hired two former police detectives, not three, to review the election.