Minnesota Democrat who rose after Castile death under attack over allegations 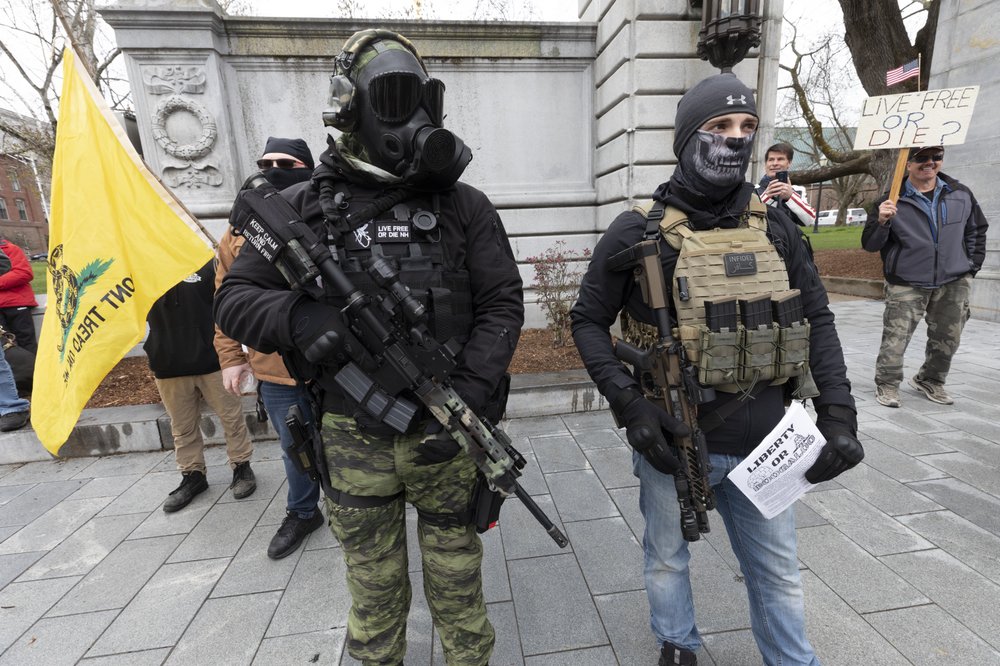 FILE - In this April 18, 2020, file photo, members of the boogaloo movement, attend a demonstration against the lockdown over concern about COVID-19 at the State House in Concord, N.H. It's a fringe movement with roots in a online meme culture steeped in irony and dark humor. But experts warn that the anti-government boogaloo movement has attracted a dangerous element of far-right extremists. (AP Photo/Michael Dwyer, File)

MINNEAPOLIS (AP) — A Minnesota man who authorities say is a self-proclaimed member of the anti-government “boogaloo” movement and had discussed a willingness to kill police has pleaded guilty to illegally possessing a machine gun, federal prosecutors announced Thursday.

During his guilty plea Wednesday, Michael Dahlager, 27, of St. Cloud, admitted he possessed two devices that convert a semi-automatic firearm into an unlawful fully automatic firearm. He remains in federal custody pending sentencing.

Dahlager was a self-proclaimed follower of the “boogaloo,” a concept embraced by a loose network of gun enthusiasts and militia-style extremists. The FBI began investigating Dahlager in November 2020, after an informant said he had the devices, known as “auto sears.”

According to an FBI affidavit, Dahlager told a confidential informant he was preparing to “defend” a rally at the state Capitol on Jan. 17. Dahlager allegedly traveled from St. Cloud to St. Paul in December 2020 to conduct surveillance at the Capitol building during a “Stop the Steal” rally by Donald Trump supporters. He scouted police numbers and noted which streets would be blocked by law enforcement, among other things.

Dahlager told the informant he wanted to commit “suicide by cop” and would not wear a bulletproof vest, according to the affidavit. He said he would “go out fighting” and “go hunt some pig.”

According to court documents, the group decided not to attend the rally because of fears they had been compromised by an informant.

Court documents say Dahlager delivered two auto sears to the informant in February. When he was arrested in April, authorities recovered six additional auto sears and a silencer from his vehicle and home.

The boogaloo term was derived from an ’80s movie sequel called “Breakin’ 2: Electric Boogaloo,” and is slang for a second civil war or collapse of the U.S. government. The movement has grown beyond its origins as an internet meme on fringe websites. Gun-toting “boogaloo bois,” some wearing body armor over Hawaiian shirts, have often attended protests against COVID-9 lockdown orders. The shirts are a nod to “big luau,” derived from the movement’s name.

Federal authorities have warned of bloodshed inspired by the boogaloo ideology and linked the movement to a string of killings and violent plots. On Thursday, a Maryland man who acknowledged he followed the movement was sentenced to six months of home confinement for illegally possessing a firearm.

In another case, a Minnesota man and a North Carolina man pleaded guilty to conspiracy to provide support to a foreign terrorist organization. Prosecutors said the two delivered firearm components to an undercover FBI agent — who they believed was with the group Hamas — to make money for the boogaloo movement. Authorities say the two took advantage of unrest in Minneapolis after the killing of George Floyd and spoke about destroying government buildings and killing politicians.