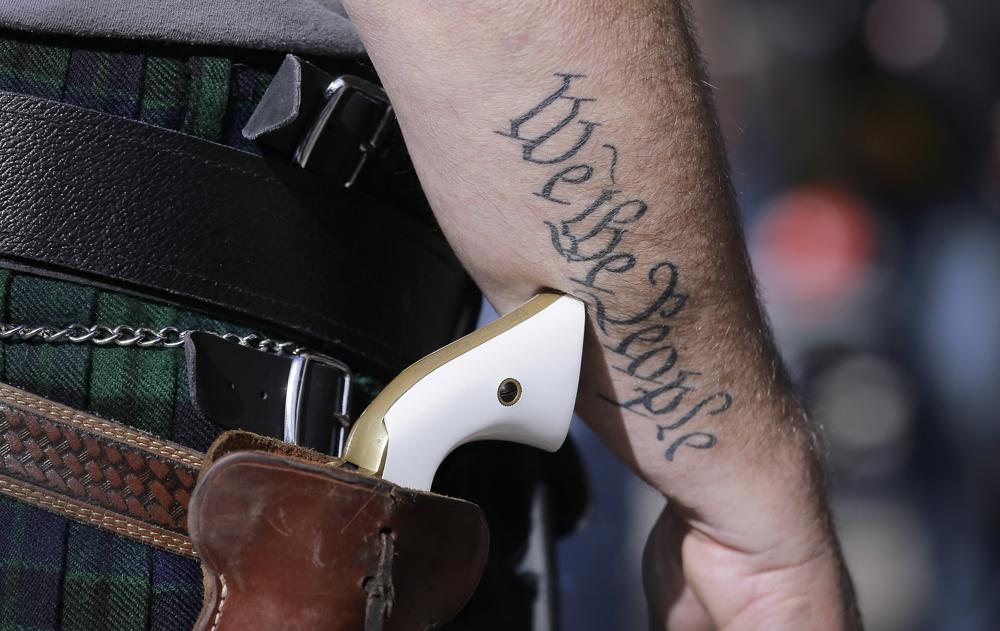 FILE - In this Jan. 26, 2015 file photo, a supporter of open carry gun laws, wears a pistol as he prepares for a rally in support of open carry gun laws at the Capitol, in Austin, Texas. Texas lawmakers have given final approval to allowing people carry handguns without a license, and the background check and training that go with it. The Republican-dominated Legislature approved the measure Monday, May 24, 2021 sending it to Gov. Abbott. (AP Photo/Eric Gay, File)

AUSTIN, Texas (AP) — Texas will now let people carry handguns without first getting a background check and training, becoming the latest and largest on a growing list of states to roll back permitting requirements for carrying guns in public.

Republican Gov. Greg Abbott held a ceremonial bill signing Thursday at the Alamo, a key historical symbol of Texas pride, in San Antonio. He called it a measure of freedom and self-defense, while also connecting it to his ongoing fight with the Biden administration over the flow of migrants across the border with Mexico.

“There is a need for people to have a weapon to defend themselves in the Lone Star State,” Abbott said.

Gun rights groups have made significant gains in efforts to relax gun possession laws. Several states have passed similar bills this year, including Tennessee, Utah and Iowa. Montana and Wyoming also expanded the ability to carry without a permit. Legislation passed in Louisiana but is expected to be vetoed. Republican-controlled legislatures in Pennsylvania and Ohio are also considering similar bills.

The legislation comes against the backdrop of record-shattering gun sales that began as the coronavirus pandemic took hold last year and have continued to grow.

The Texas law takes effect Sept. 1 and Abbott signed the bill over the objections of law enforcement groups who say the change will endanger the public and police. It’s backed by gun rights groups including the National Rifle Association, who argue it will allow Texans to better defend themselves and remove hurdles to the constitutional right to bear arms.

The NRA has called it the “most significant” gun rights measure in the state’s history.

“In this increasingly dangerous world, people want to be able to protect themselves,” said NRA leader Wayne LaPierre, who attended the Texas bill signing. “Thank God Texas is leading the way for the country in making that possible.”

Texas — home to more than 29 million people — is by far the most populous of the approximately 20 states that allow people to carry a gun in public without a permit. Most of those have rolled back requirements in the last four years, according to the Giffords Law Center to Prevent Gun Violence.

“This is about creating a profitable culture of fear and do-it-yourself armed security, and there is no evidence that these laws promote public safety,” Giffords State Policy Director Ari Freilich said in a statement.

Gun control groups also oppose the Texas measure, noting the state’s recent history of mass shootings, including a racist attack at a Walmart in the border city of El Paso, and attacks at a Baptist church in Sutherland Springs and at Santa Fe High School outside Houston.

“This callous and reckless bill is an insult to every Texan who has been affected by gun violence,” said Maya Friedberg, a volunteer leader with the group Students Demand Action in Houston, in a statement.

Texas already has some of the loosest gun laws in the country and has more than 1.6 million handgun license holders. The state doesn’t require a permit to carry a rifle. Still, previous efforts to remove the handgun license requirement had been resisted until a strong push from conservatives lawmakers this year.

The new law will allow anyone age 21 or older to carry a handgun without first getting a permit. People with felony convictions or other legal prohibitions would still be prohibited from carrying, and the legislation stiffens penalties for those who do, but law enforcement groups worry that without the permit requirements there’s no way to weed them out ahead of time.

Background checks are required to buy guns at licensed dealers, but Texas doesn’t require them for private gun sales.