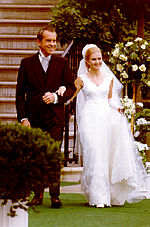 In June of 1971, the La Crosse city council was back to debating the best way to control mosquitoes.  Aldermen voted down a plan to resume the long-time practice of sending fog machines out on summer nights, and proposed an April referendum to let voters decide whether to continue fogging.  A Tribune editorial predicted that voters probably would support more fogging, unless they included fluoride in the bug spray.  That was a swipe at city residents repeatedly turning down referendums on fluoridating local tap water.    When the referendum was held the following spring, fogging was defeated by a 14-hundred vote margin.

City Hall was looking for more parking.  The city was in discussions with the Diocese of La Crosse to allow public parking south of the cathedral, and with Burlington Northern to remove an old downtown train depot on 2nd Street for more parking space.

It’s not unusual for a performer not to sell out a concert venue, but a promoter accused singer Tom Jones of taking too much money after only filling the Dane County Coliseum to about 50 per cent for a June show. Jones’s hit ABC TV show, “This Is Tom Jones,” had ended its run earlier that year. While in Madison, Jones was accused of kicking a boxer in the eye during a party at a hotel, and he was served with a civil summons.

Norma’s Beauty Salon on Cass Street said your dad would be the happiest dad in town, if you gave him a Father’s Day gift certificate, for a custom-made toupee.

President Richard Nixon might have been the happiest ‘father of the bride’ in America that June, when his daughter Tricia got married to Edward Cox.  It was the most recent wedding of a presidential relative to be held at the White House, and it was 50 years ago, in 1971, yesterday in La Crosse.