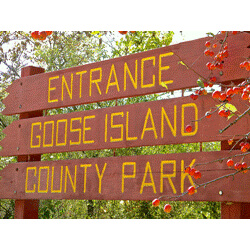 Americans were told not to travel much last summer, during the early months of the pandemic, but La Crosse County campgrounds had a very busy year in 2020, anyway.

Goose Island Park had its best year for visitors since 2017, greeting 127-thousand people last year.  The park had 10-thousand or more visitors every month from April through August.

Goose Island also counted 25-thousand “camper nights” last year.  Wisconsin residents accounted for 80 per cent of the nights spent camping at Goose Island, with campers from 44 states spending at least one night at the park south of La Crosse.

On the other hand, May of 2020 was a bleak month for bookings at La Crosse County’s three county-run parks, judging by the numbers of people renting shelters for parties or picnics.

According to county statistics, there was just one shelter rental last May, compared to 28 rentals in May of 2019.  However, in June, 30 people rented the shelters at Goose Island, Veterans Park, or Neshonoc…and the best month of last year was August.

Just about every year, the most popular reason for renting a county park shelter is for family picnics.  Graduation parties were the second-most popular use in 2020.