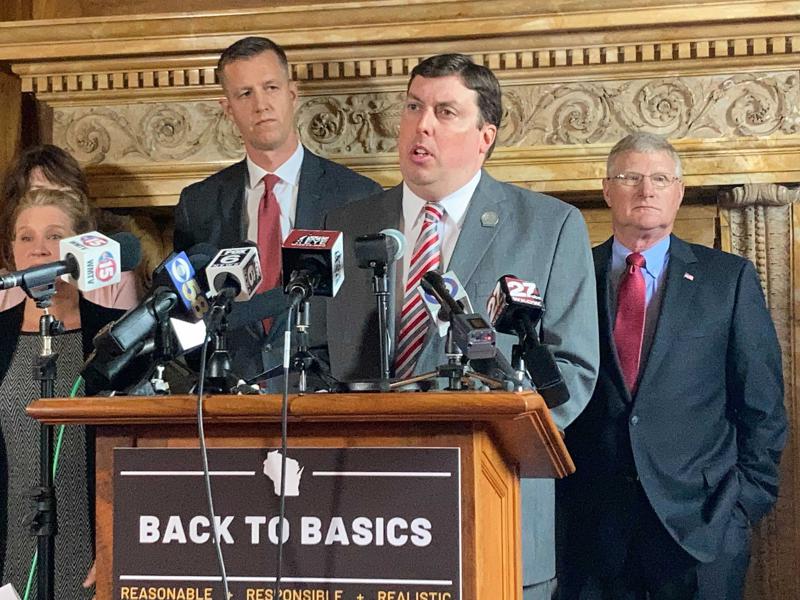 MADISON, Wis. (AP) — The Wisconsin Legislature’s Republican-led budget committee on Thursday killed hundreds of Democratic Gov. Tony Evers’ priorities, including ones that would have legalized marijuana and expanded Medicaid, as it began crafting the next state spending plan.

Republicans, along a party line vote, essentially scrapped the Democratic governor’s entire two-year spending proposal and instead began crafting their own budget based off of the current budget, which the GOP-controlled Legislature passed two years ago without a single Democratic vote and which Evers signed into law.

Republicans were shaping a “reasonable, responsible and realistic” budget by removing nearly 400 of Evers’ proposals, said Joint Finance Committee co-chair Sen. Howard Marklein. On the issues that remain, Republicans planned to build the budget based not on what Evers wanted, but instead on what is current law.

The items Republicans killed would have brought in $3.4 billion to the state, mostly through higher taxes on capital gains and manufacturers, and by accepting federal Medicaid expansion. That alone would have saved the state $1.6 billion, when including federal money that would have come to Wisconsin.

Evers, in a Thursday letter to Republican leaders, called their gutting of his budget “ill-advised.” He singled out their killing of Medicaid expansion, and the loss of $1.6 billion, saying it would “jeopardize our state’s ability to bounce back from this pandemic.”

Republicans for years have resisted accepting full Medicaid expansion. Evers’ plan would allow about 90,000 people to be eligible for BadgerCare Plus, a move Democrats have long pushed for only to be blocked by Republicans.

Committee co-chair Rep. Mark Born called Democratic criticism of the rejection of Medicaid expansion “crap,” saying they were being dishonest in not calling the initiative a welfare expansion.

“This is a health insurance welfare program, and anyone that can’t be honest about what it is, why are even talking about it then?” Born said.

Democratic Sen. LaTonya Johnson, of Milwaukee, said the issue wasn’t about welfare, but about providing medical treatment to poor people who need it.

Other proposals that Republicans killed would have legalized and taxed marijuana; raised taxes by $1 billion, mostly on capital gains and manufacturers; increased the minimum wage to $10.15 per hour by 2024; restored public workers’ collective bargaining rights that were lost in the Act 10 law; suspended enrollment in the private school voucher program; and created a so-called red flag law that would allow guns to be seized from people deemed to be a danger by courts.

Marklein said there were some good ideas that may return later, but when asked during a news conference, he couldn’t name any.

Republicans said the budget they will write will likely include a tax cut of some sort, but they haven’t given details. They were also calling on Evers to give them more details about how he intends to spend $3.2 billion in one-time federal stimulus money coming to the state. Evers has revealed some details, but not all of his intentions for the money, which is solely under his discretion to spend.

Evers, in his letter to Republicans, said the one-time federal money was designed to provide immediate relief to businesses and individuals hurt most by the coronavirus pandemic, which is why he was moving ahead to spend it quickly. It’s not intended to replace state money for ongoing programs that are funded in the state budget, he said.

Evers noted that he has released general areas where he intends to spend the federal money while he waits for guidance from the federal government on details about how it can be used. He also said he would be willing to meet with Republicans, as they requested, to discuss his plans.

Thursday’s meeting of the budget committee is the first where it takes votes on the two-year spending plan that runs from July through mid-2023. The full Legislature will likely vote on the budget in June or July, and then Evers can make significant changes with his broad veto power.