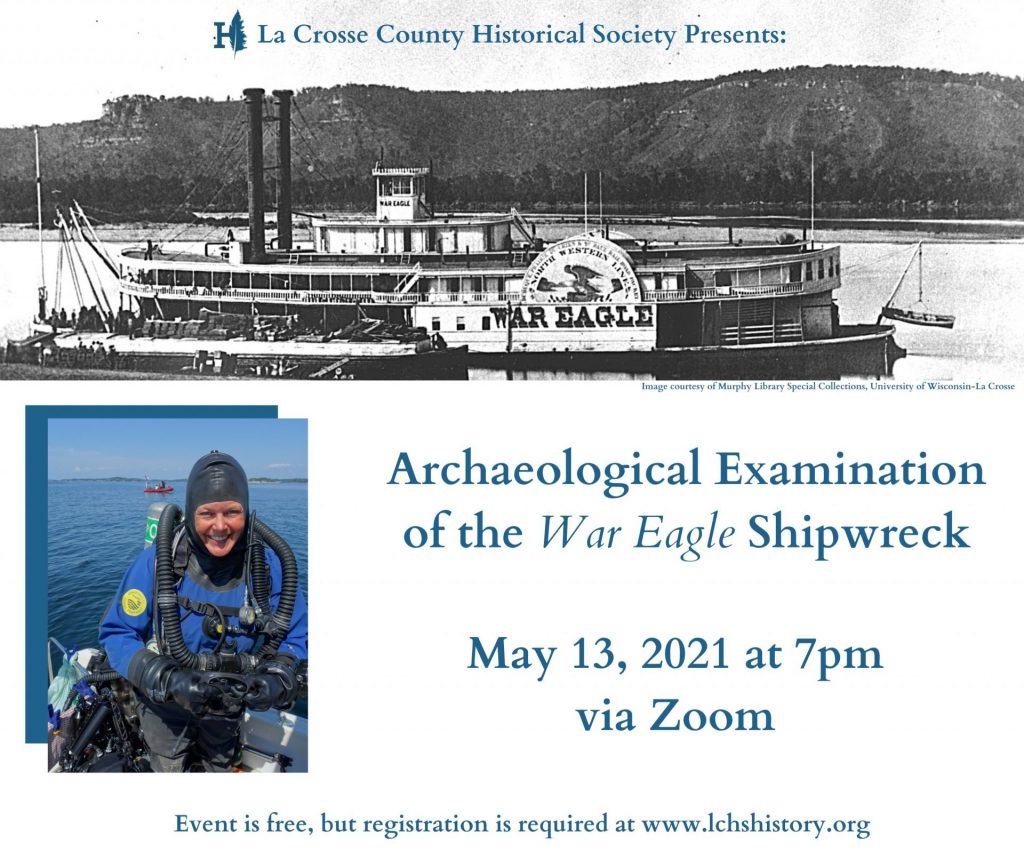 You’ve heard the legend but what do we really know about the famed War Eagle?

Near the north end of Riverside Park lies the remains of the side wheel steamboat War Eagle. Just over 150 years ago the War Eagle caught fire and sank.

Join Wisconsin Historical Society’s maritime archaeologist, Tamara Thomsen for a Zoom presentation to discuss the 2018 survey of the War Eagle and its nomination to the National Register of Historic Places. On May 13, viewers will learn about the remote sensing technology they used and see the detailed sonar image of the War Eagle shipwreck site.

Classic Hits 94.7 spoke with Peggy Derrick, the Executive Director of the La Crosse County Historical Society, about the program.

Derrick said of Thomsen, “She’s done a lot of diving in the Great Lakes, she worked on the Titanic in the North Atlantic. In 2018, she and a team came and did sonar readings, and created a detailed document that shows the wreck of the steamboat War Eagle.” This will be a large part of the presentation.

Derrick added, “the War Eagle was a big side wheeler steamboat that sunk in 1870 because it caught on fire. It created a huge fire, burned two boats and the dock, depot and the warehouse. It was a major disaster at the time; at least five people died.”

Derrick said there has been diving at the site in the past, before it was made illegal.

The event is free but they ask that you pre-register at their website.

Tamara Thomsen is a Maritime Archaeologist with Wisconsin Historical Society’s Maritime Preservation and Archaeology program. Her research has resulted in the nomination of fifty-seven submerged sites to the National Register of Historic Places. She has received awards from the Association for Great Lakes Maritime History, the Great Lakes Shipwreck Preservation Society, and in 2014, she was inducted into the Women Diver’s Hall of Fame. Tamara has worked as a photographer, researcher, and research diver on projects including the USS Monitor with NOAA National Marine Sanctuaries, and RMS Titanic with Woods Hole Oceanographic Institution.