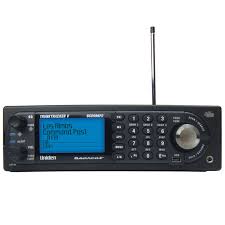 By the spring of 1984, the CB radio fad may have been done, but special radios were still popular…especially police scanners, for people to listen to squad-car radios.  Wettstein’s in La Crosse was selling a Bearcat scanner for $99.  If you wanted a good car radio with a cassette player, you could buy a Clarion model for about $200 at Schaak Electronics in Valley View Mall.

Talk radio was becoming popular in 1984.  Listeners to WIZM could hear Talknet at night, to get financial advice from Bruce Williams or information about personal affairs from Sally Jessy Raphael.  Both hosts later came to La Crosse for public appearances.  And Larry King was on late at night.  He hadn’t started his TV show on CNN yet.

Robert Quackenbush was retiring from the legislature.  Republican Quackenbush had been a school teacher in Tomah before being elected to the Assembly from Monroe County for seven terms.  He was 60, and decided that was a good time to retire.

George McGovern was no longer a U.S. Senator.  He was defeated in the 1980 election, but the former presidential candidate was trying something new.  McGovern hosted ‘Saturday Night Live’ in April of 1984, yesterday in La Crosse.