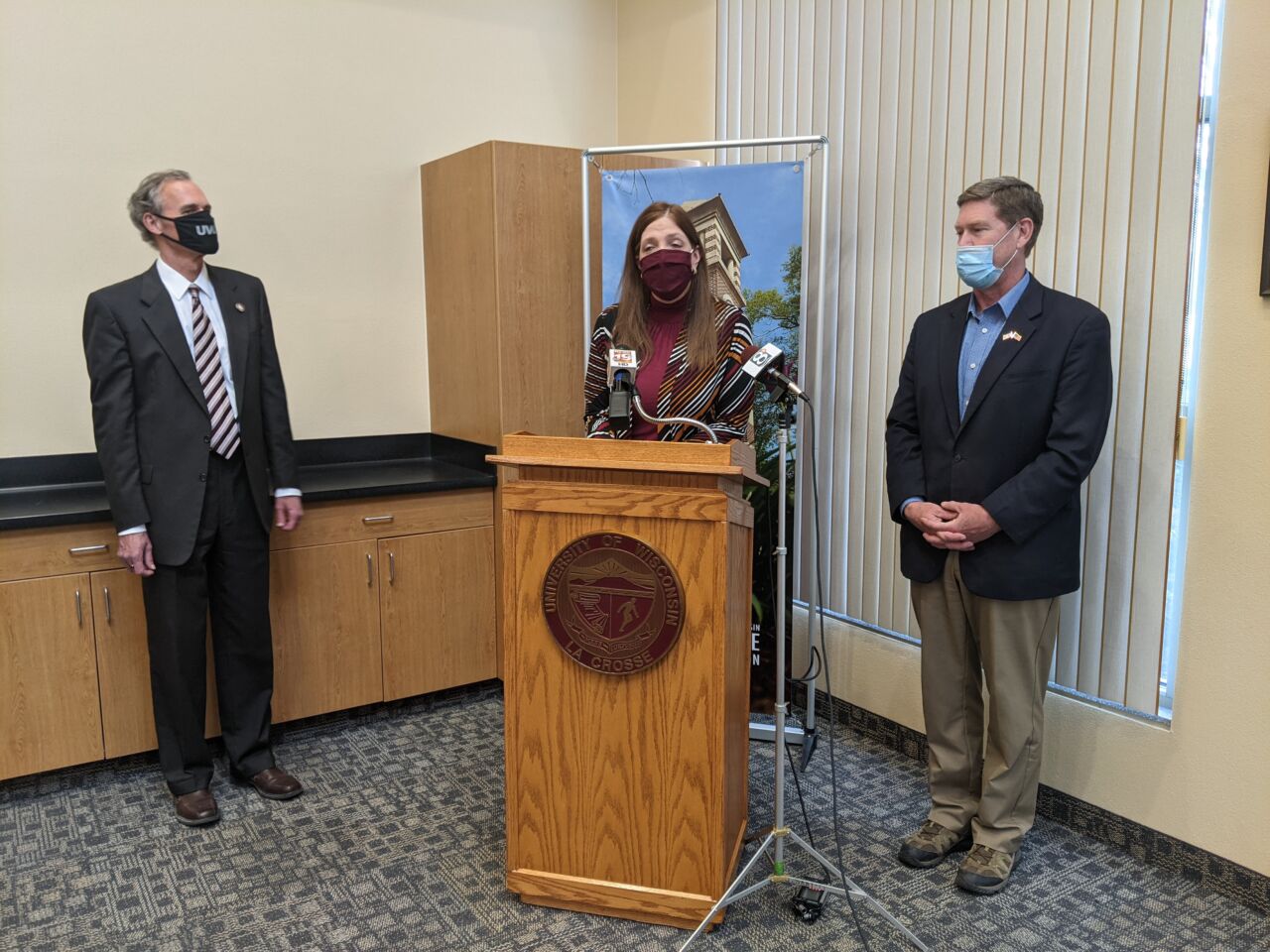 Kind and Van Dijk were joined by officials from the university, the La Crosse County Health Department, the Wisconsin Department of Health Services, and AMI Expeditionary Healthcare — the four partnering organizations on the project.

The clinic, housed in the Cleary Alumni & Friends Center, distributed more than 2,000 doses of the vaccine since opening March 9. After starting with a capacity of 200 doses per day, the clinic has ramped up to 250 doses, with the goal of hitting 1,000 by mid-April.

“This is an unbelievable vaccine site operation,” Kind said. “It’s a well-oiled machine. This is a public-private partnership like we’ve never seen before.”

He noted Wisconsin is among the top five states in the country when it comes to distributing vaccines in a timely manner. Kind said Wisconsin is nearly at a point where it can reopen its economy, send children back to school and return to life and business as usual, but more people need to be vaccinated.

“We can see the light at the end of the tunnel, but we’re not there yet,” Kind said. “We’re asking people to be patient. We don’t want to take steps back when we’re so close to the finish line.”

“We’ve reached out to our counties around us to make sure that we’ve been able to help them with their 65 plus population knowing that we can’t always get everybody into a healthcare provider,” Kind said. “This is just one additional place for them to access.”

Van Dijk said it’s been a team effort to get as many people vaccinated as possible, as quickly as possible. Their partnership with the La Crosse County Health Department helped reach populations in the area that otherwise may have been difficult to contact such as those at shelters, homebound populations, or various demographics.

“It’s all players, all working together, all the time,” she said. “We’ve provided vaccine to health care, pharmacies, local health departments, employers, tribal nations, and they’re all distributing the vaccine quickly. We are thrilled to be part of the team along with the university.”

She said Wisconsin DHS is also working with FEMA to open sites that are functioning in Milwaukee and so to be in Eau Claire.

While UWL plays no role in the day-to-day staffing or site operations, Chancellor Joe Gow said he is proud that the university can contribute by providing the facility.

“It’s an honor to be the center of this local-state-federal-private partnership. It really underscores the importance of the time we’re in,” Gow said. “We’re very proud that, when the history is written about this time, we’ll be able to say that UWL kept going, and that’s what it’s all about.”

The clinic is open Tuesdays through Saturdays from 11 a.m. to 7 p.m. on an appointment-only basis. The county is currently prioritizing people 65 and older, public-facing workers such as educators, and people with high-risk medical conditions.

People can join the county’s vaccination registry by visiting vaccinate.wi.gov/ or calling 1-844-684-1064. People will be contacted for an appointment when they become eligible.