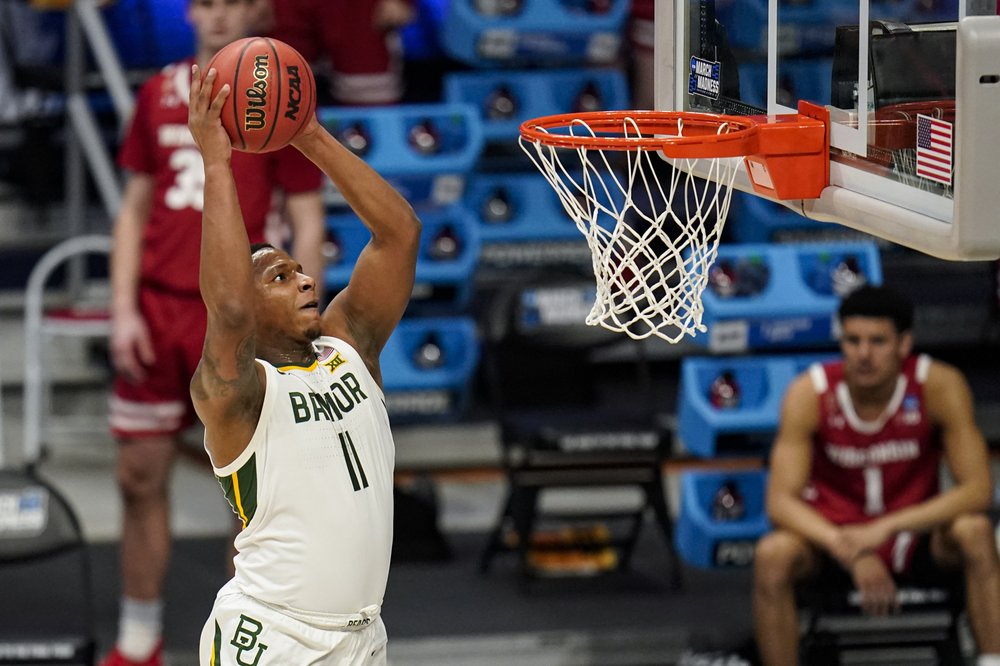 Baylor guard Mark Vital (11) gets a dunk against Wisconsin in the first half of a second-round game in the NCAA men's college basketball tournament at Hinkle Fieldhouse in Indianapolis, Sunday, March 21, 2021. (AP Photo/Michael Conroy)

INDIANAPOLIS (AP) — A second COVID-19 pause seemed to make Baylor vulnerable in March, some of the verve drained from a defense that was being compared to the all-time best.

The big, bad ball-hawking Bears are back and again look like a team ready to make a deep run — possibly into the Final Four.

La Crosse native Jonathan Davis had 10 points on 4-of-5 shooting, including 1-for-1 from deep. The 6-foot-5 freshman also had two rebounds, three turnovers and four fouls in 24 minutes.

Davis had six points on 3-of-4 shooting, to go with six rebounds, three assists, a steal, a block and a turnover in 23 minutes against North Carolina in the first round.

Davion Mitchell scored 16 points and spearheaded a dominant defensive first half, helping top-seeded Baylor avoid another NCAA Tournament upset with a 76-63 win over Wisconsin on Sunday.

“We really pride ourselves on just making things hard for other teams, giving ball pressure, not making them feel comfortable, making them keep dribbling the ball and not being able to look,” Mitchell said. “I think we definitely are getting back to ourselves.”

The knock on Baylor entering the NCAA Tournament was that the Bears weren’t quite as good coming off their second COVID-19 pause as they were while winning the first 18 games of the season.

Baylor didn’t look quite as unstoppable after the pause, the hands and feet not quite as quick while losing two of the final six games.

The Bears (24-2) found their defensive groove in the first half against Wisconsin, looking every bit a Final Four favorite not long after Illinois became the first No. 1 seed to bow out of the bracket.

“They went small and were switching everything and made it difficult for us to do what we want to do,” Wisconsin coach Greg Gard said. “I give credit to Baylor for forcing us away from what we wanted to do.”

The Badgers (18-13) showed a bit of fight after being backed into an 18-point corner, rallying to within seven midway through the second half behind D’Mitrik Trice (12 points).

The Bears answered the run with a dash of more D to reach the Sweet 16 for the fifth time under coach Scott Drew. They’ll get Villanova or North Texas next.

Dominant Baylor showed up in the NCAA Tournament opener after a shaky start, hitting 11 3-pointers in a 79-55 win over Hartford.

A short turnaround to prepare for Wisconsin’s grinding style is never easy, which countless teams learned during the Bo Ryan years.

These Bears had no trouble on little rest.

Baylor was at its chest-to-chest best on defense, limiting Wisconsin’s open looks and jumping into passing lanes to create turnovers. Those led to easy transition baskets, like the alley-oop from MaCio Teague to Mark Vital that had the basket still wobbling as the Badgers set up on offense at the other end.

In the half court, Baylor repeatedly got into the lane, setting up a series of lobs and short-range floaters. When Wisconsin packed it in, the Bears went to the 3, the last by Adam Flagler at the buzzer to put Baylor up 42-29.

“They did a great job of pressuring us and getting us out of our comfort zone at times,” Trice said. “At the end of the day, we’ve just got to be able to make some plays happen and knock down some shots.”

Wisconsin showed plenty of fight after being dominated in the first half. The Sweet 16 bid fell short when the shots wouldn’t fall down the stretch.

Baylor showed glimpses of the dominating D from its fast start to the season. The Bears let up a little in the second half, but it was plenty good enough to reach the Sweet 16 for the first time since 2017.

TAKING CARE OF THE BALL

Baylor dominated on D at times, but was pretty good with the ball, too.

The Bears shot 8 of 17 from 3-point range, had 15 assists on 25 field goals and turned the ball over four times.

“I knew the guys were locked into the scouting and would play well,” Drew said. “Fifteen assists and four turnovers? I didn’t think we’d play that well, but that’s a pretty good number against a really good team.”