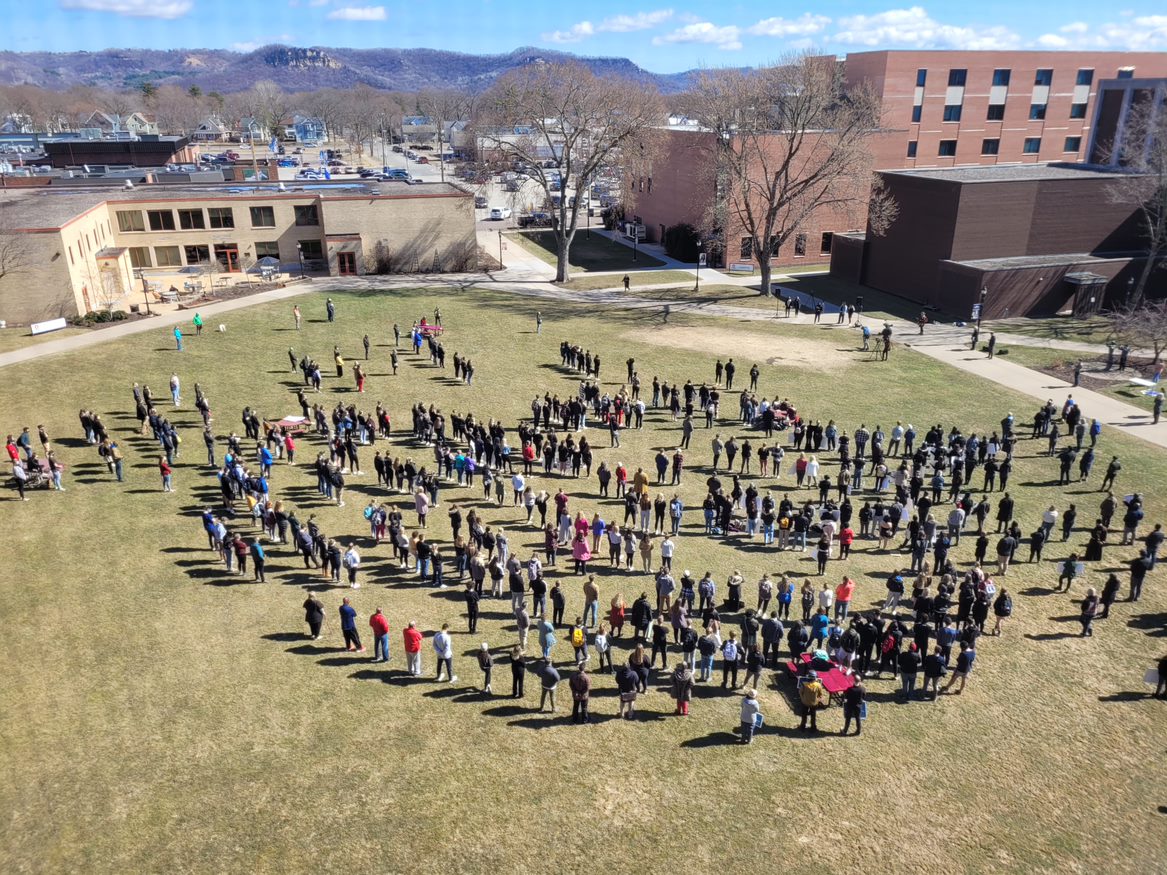 Community members gather Thursday at Viterbo University to listen to activists speak out on racism, which happened multiple times this week on campus. (PHOTO: Rick Solem)

Racism on the Viterbo University campus this week led to a show of support at a student-led demonstration on campus Thursday.

Hundreds gathered outside to listen to people of color speak out after racist remarks were directed at a student on campus multiple times. And that student, Victoria, was among those who took the microphone.

“I’m a freshman. Education major. And, I’m sorry to say this, but as most of you know, I’m the student this happened to,” she began. “It’s really scary to wake up in the morning, open your door and there’s a writing of hate on your door.”

That, however, wasn’t her initial reaction to the racist remarks.

“I’m really sad and angry,” she continued. “And, at first, when I saw that, I didn’t even know how to react to it. I laughed at it. I thought it was a joke. But then it happened again.”

Keonte Turner is a leader in the Black community here in La Crosse, as well as a school board member. He described Thursday on La Crosse Talk PM, some of the incidents he heard Victoria had to endure.

“What was done, there was rhetoric that was left on a kid’s door that said, ‘Get out of our school,’” Turner said. “The other one was, ‘You’re a bad person because you’re black.’ That then was actually cleaned off the door. Then another message was left. And it said, ‘Leave our school. You’re an ugly black girl. I’m not joking.’

Turner, who is running for city council in District 12 against incumbent Doug Happel, further discussed how different the world is — how different the La Crosse community is — for Black people as compared to white.

“We do live in parallel universes,” Turner said. “One of my friends, I was talking to, I said, ‘Hey, have you been noticing all the deplorable things on the news?’ And he said to me ‘No, we just turn the TV off.’

“And I really need the La Crosse community to understand that, as a Black man, I can’t just turn the TV off because I don’t want to see what’s on it, because it may make me feel bad. I have to live this. There is a complete and utter difference, if you will, the way I live and the way you all live.”

Victoria, who, if you noticed, apologized for everything that’s happened, despite being the victim, went on to discuss a conversation she had with her mother about coming to school in a predominantly white community.

She mimicked her mother’s side of the conversation, making these points about her daughter coming to La Crosse:

“I’ve never seen this happen before,” she said. “I’m a Black person but do we have to show our hate that way? You could come up to me and tell me that I did something to you, right? And say, ‘Please, leave this school. We don’t want you here.’

“Then I’ll understand and ask you why you don’t want me here and we can work things out.”

Turner, who is a member of B.L.A.C.K. (Black Leaders Acquiring Collective Knowledge), a La Crosse nonprofit that is working on finding ways to bring the La Crosse Black community together, said that part of the problem with racism starts at home.

“One of the words that sticks out to me the most is “our” school. Get out of ‘our’ school. This was left two times — ‘Get out of our school,’ and ‘Leave our school.’”

Turner also criticized the school systems to a degree.

“The traumatic experience that one goes through, you’re supposed to feel that your university is your space, is your safe haven, and I don’t think we do a very good job,” he said. “This is one of the things that we’ve been working on for my time on the Board of Education, which is trying to figure out how we make these classrooms as inclusive and as inviting as possible.

“I will tell you that any kid going to college here — in a predominantly white city — these are things we go through all the time.”

Viterbo cancelled classes for just over an hour for the demonstration. The university is still investigating who’s responsible for the hateful messages directed at Victoria, and it will be holding multiple listening sessions in the coming weeks to address racism.