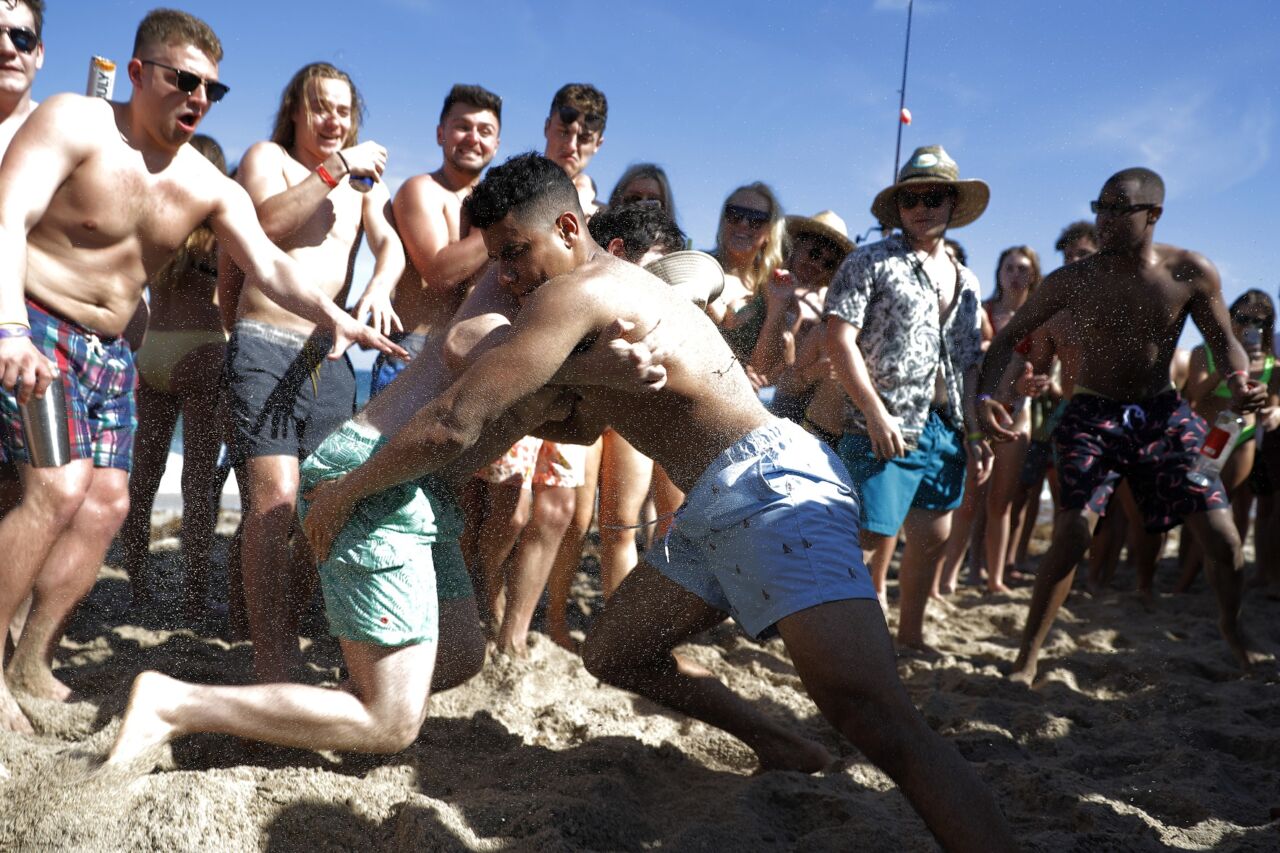 FILE - Two men wrestle each other as spring break revelers look on during a contest on the beach, Tuesday, March 17, 2020, in Pompano Beach, Fla. (AP Photo/Julio Cortez)

Colleges around the U.S. are scaling back spring break or canceling it entirely to discourage partying that could spread the virus and raise infection rates back on campus.

Texas A&M University opted for a three-day weekend instead of a whole week off. The University of Alabama and the University of Wisconsin-Madison also did away with spring break but are giving students a day off later in the semester.

Even some students who have the time to get away aren’t in the mood. Michigan Tech’s weeklong break began Friday, but 21-year-old Justin Martin decided to visit family in Michigan instead of making that epic senior-year trip to Florida he once envisioned.

To be sure, many college students looking to blow off steam or escape the cold and snowy North are still going to hit big party spots such as Florida, Mexico, California and Las Vegas to soak up the sun and go bar-hopping at night. Others will go skiing in the mountains or hit other tourist spots.

But many others say they will be reluctantly skipping trips this year.

“Definitely, no planned trips. Definitely wearing masks this year,” said Brady Stone, a 21-year-old journalism major at Texas A&M. “We are kind of hunkering down and staying safe.” He added: “I think most of us, if we are going anywhere, it is back to their hometowns.”

Tourism is the Sunshine State’s No. 1 industry, generating over $91 billion in 2018, and last year spring break was one of the first big casualties of the pandemic as the U.S. went into strict lockdowns, shutting down beaches across Florida just as alarming scenes of college students heedlessly drinking, dancing and getting up close without masks were plastered across social media.

Now, those beach towns are hoping to make up for some of those losses, even as they take precautions to discourage reckless behavior and curb the spread of the virus. Miami tourism officials have spent $5 million on the city’s biggest national advertising campaign in 20 years.

Some communities say they are starting to see visitors return, even though health experts warn that the outbreak that has killed more than a half-million Americans is far from over.

Airline travel to Miami is down more than half from last year, said Rolando Adeo, chief operating officer of the Greater Miami Convention and Visitors bureau. But hotel occupancy is expected to reach 70% in Miami Beach this month, he said. While that’s down from 85% in 2019 pre-pandemic, it’s still a marked improvement from 43% last year.

University of Louisville student Josie Hornback and four girlfriends spread their colorful towels as they tanned on Florida’s Clearwater Beach last Tuesday, unfazed by the virus.

Florida has no statewide mask rules, limits on capacity or other such restrictions, courtesy of Republican Gov. Ron DeSantis’ pro-business stance. But local governments can impose rules, and they vary widely.

“Spring break in Miami Beach may be one of the great rites of passage, but only if you plan on following the rules. Otherwise, you might as well just stay home and save yourself the court costs,” the message reads, followed by a reminders that alcohol, coolers and tents are banned from its beach, a midnight curfew is in effect countywide, and no alcohol can be sold after 10 p.m.

“If you want to party without restrictions, then go somewhere else. Go to Vegas,” Miami Beach City Manager Raul Aguila said during a recent virtual city meeting.

Around the state, many are taking the party to the open waters, where guests can imbibe under less-watchful eyes.

Andrew Cohen, co-owner of Staying Afloat Party Boat, said his boats are nearly sold out for the rest of the month in Tampa and Fort Lauderdale.

“A lot of them are coming down from the colder states,” he said. “And they were just sick of being cooped up for the year.”

California is discouraging visitors from out of state, warning tourists they will have to quarantine for 10 days on arrival, and a season that ordinarily would see crowds at beaches, theme parks and ski mountains is expected to be thin. The state, with miles of coastline and popular spring break spots like Disneyland and the Santa Monica Pier, has some of the nation’s toughest pandemic restrictions.

At the University of Mississippi, which canceled spring break and will instead end the semester a week early, senior Eliza Noe had been planning a “last hurrah-type getaway trip” with her girlfriends, but that isn’t going to happen now.

“Spring break is your last moment to lose your mind before becoming an adult, so that was kind of the plan,” she said, “but then the world ended.”