KRUSE: Not up to Ethics Board to decide if employee commits an error of judgment, in reference to O'Malley Facebook comment on Limbaugh 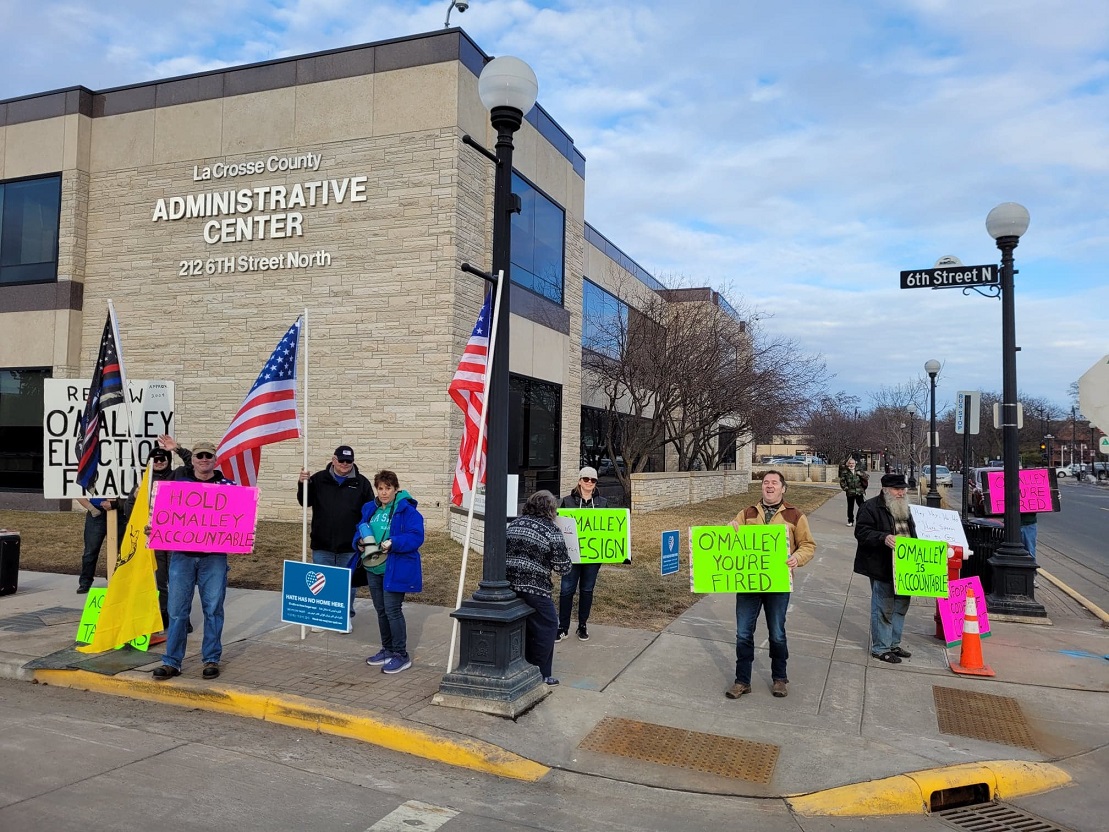 Protesters stand on the corner of Sixth and State streets in La Crosse on March 5, 2021, unhappy with a Facebook comment county administrator Steve O'Malley left about Rush Limbaugh.

O’Malley made a comment with his personal Facebook account on a media outlet post that read, “If I believed in hell, it would be the most deserving place for the likes of him [Limbaugh]. …”

In a letter to County Board Chair Monica Kruse, the board said the comment did not go against the current Code of Ethics.

Kruse told WIZM News on Friday afternoon that she believes the Ethics Board acted in an “impartial” way in the O’Malley case.

Kruse noted the county has about 1,700 employees, and that, “it’s really a daunting task to try and keep track of everything that they post on social media. And if we do it for one employee, we do it probably for all,” which she says might require a full-time person just to “troll” websites to monitor on-line activity.

“The role of the La Crosse County Ethics Board is not to comment on whether a county employee committed an error of judgment which does not fall explicitly under the provisions of the Code of Ethics.

An individual with a La Crosse Tea Party email address emailed a screenshot to the entire County Board, and local media.

Protesters made a plan to gather outside the Administrative Center from 3-5 p.m. Friday — coincidentally that ended up being a few hours after the Ethics Board made its decision. The Ethics Board initially met at 11 a.m. Thursday.

“It’s just an advisory opinion,” Greg Luce said during the protest. “The County Board is the administrator’s boss. We’re hoping the County Board does its job and fires him.

Another protester had gone onto O’Malley’s since deleted Facebook page and was upset at what she saw.

“I went back and I’m actually appalled,” Betty Ekern said. “It was post after post after post. It’s one thing to be against a candidate but obviously it was against conservatives.

“It was against … very vile posts. There was a video he posted of blowing (Donald) Trump up. Literally blowing him up. That’s wrong. So it’s far more than the Rush Limbaugh comment.”

“He needs to be held accountable,” she continued. “He’s our county administrator. … He’s going against code of conduct, as far as personnel, when you read that. He represents La Crosse and he’s not doing that by those types of actions.”

Of the Ethics Board decision, Ekern said she wasn’t surprised.

“It’ll go to the executive committee or the executive board,” she said. “They’re the oversight for all of this. I’m not surprised. Sometimes it’s the ‘Good ole’ boys club’ protection.”

This was the first time the La Crosse County Ethics Board had met in nearly a decade.