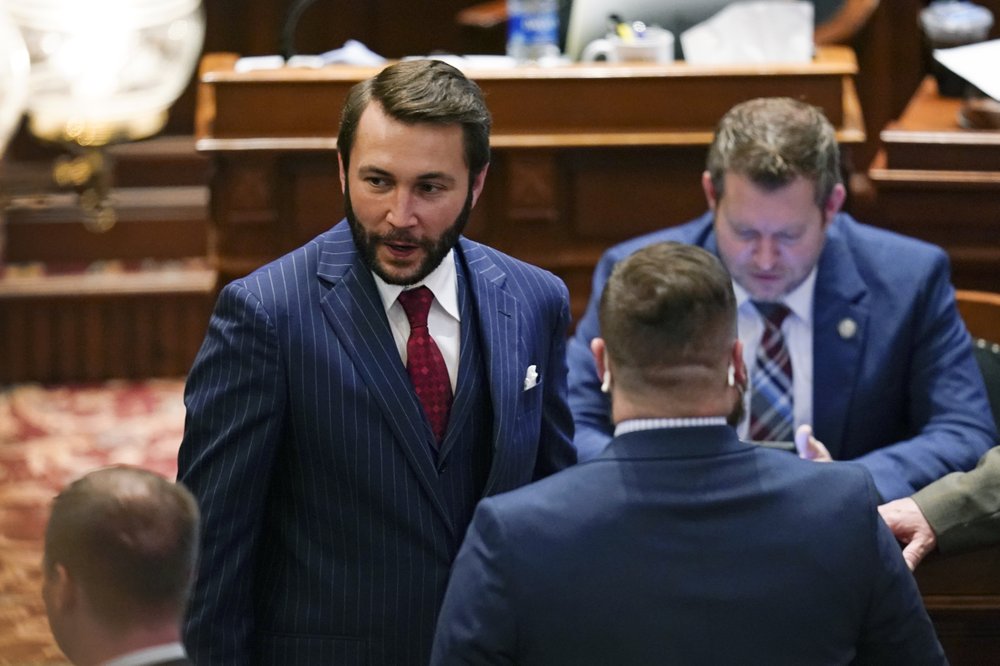 DES MOINES, Iowa (AP) — Iowa House Republicans cast the final vote needed Wednesday to send a bill to the governor that sharply limits early voting in the state, months after a general election overseen by a Republican secretary of state resulted in record turnout and overwhelming victories by GOP candidates.

The bill passed with only Republican votes just a day after it similarly passed the Senate. Supporters of the legislation cited fraud concerns as the reason early voting must be reined in. However, like in many other Republican-led states where similar steps are being considered, there historically haven’t been widespread concerns about irregularities in the election system.

“When we go back home and talk to people in the gas stations, at the grocery stores and at the hardware stores there is no disputing there are tens of thousands of Iowans that tell this Republican caucus every single week when we go home we emphatically support this bill, we want this bill, we think this bill is necessary and we support it,” said Rep. Bobby Kaufmann, who managed the bill in the House.

Democrats who are outnumbered in both chambers were left aghast but in no position to stop the changes. Republican Gov. Kim Reynolds, a strong supporter of former President Donald Trump, has indicated she’d consider them.

“Last fall we had elections overseen by a Republican secretary of state in which Republicans gained seats in the Iowa House and the U.S. House, so if there is any significant voter fraud in this state then two things are true,” Democratic Sen. Herman Quirmbach of Ames said. “It’s your fault, and second, it raises questions of the legitimacy of your own elections.”

The bill written by Republicans would shorten the early voting period to 20 days from the current 29, just three years after Republicans reduced the period from 40 days. It also would require most mail ballots to be received by county election officials by the time polls close on Election Day, rather than counting votes as long as they were postmarked by Election Day and arrived by noon on the Monday following the election. The bill prohibits the use of a U.S. Postal Service postmark as a way to verify when a ballot was mailed.

Polling times also would be reduced by an hour, closing at 8 p.m. rather than 9 p.m. And there would be new rules on absentee ballot request forms, banning officials from sending out the forms unless a voter requests one.

Satellite voting sites also could only be set up if enough voters petition for one, and voters would be removed from active voting lists if they miss a single general election and don’t report a change in address or registered as a voter again.

Rep. Chris Hall during House debate told Kaufmann his bill “is a cruel trick on the very voters we are here to serve. It is morally hollow.”

The Brennan Center for Justice, a public policy group, has counted 253 bills across the country this year meant to limit access to voting. Republican lawmakers have said the proposals are meant to bolster confidence in future elections, though they have been the loudest proponents of meritless claims that the previous election was fraudulent.

Sylvia Albert, director of the voting and elections project at Common Cause, a nonpartisan organization that advocates to expand access to voting, said the GOP is moving to depress turnout following their losses in the last election cycle.

Democratic Sen. Pam Jochum pointed out that 76% of Iowa Democrats voted by mail in November and 52% of Republicans as mail voting surged in popularity amid the coronavirus pandemic.

Iowa Republicans backing the bill argue there was voter fraud in states where Trump narrowly lost to Democrat Joe Biden, though courts have repeatedly ruled there was no significant fraud. Still, Republicans said that belief has caused their constituents to lose faith in the integrity of elections, so changes are needed. Their action follows repeated claims by Trump that mail balloting was vulnerable to fraud, again without any evidence.

During Senate debate, Sioux City Republican Sen. Jim Carlin said “most of the Republican caucus believe the election was stolen.” He added, “Who believes that Joe Biden got 12 million more votes than Obama on his best day? I don’t believe that he did better than Barack Obama.”

Iowa City Democratic Sen. Joe Bolkcom said those kind of conspiracy theories and cult behavior toward Trump are what has led some people to lose faith in elections.

“I for one am not going to normalize this bizarre irrational conspiracy theory thinking and behavior,” he said.

In a public hearing held Monday night nearly 1,200 people signed up to comment on the measure. All but 28 opposed the legislation.

Janice Weiner, a retired U.S. foreign service officer, said the section of the bill that shortens the time for absentee voting will hurt people who go south for Iowa winters, victims of domestic violence, voters in rural areas and the elderly. She cautioned lawmakers against believing debunked lies about election fraud.

“Just as Sen. (Joni) Ernst won her election and each of you won yours, President Biden won freely and fairly,” she said. “The remedy for the big lie of a stolen election is not to take an ax to election laws that worked exceedingly well, it’s simply to tell the truth.”

Gary Leffler, a West Des Moines resident who supports the bill, said he was at the U.S. Capitol on Jan. 6 and could attest that people are concerned about voter integrity.

“Right now you’ve got half the people who voted in a national election who are feeling like yesterday’s newspaper in the bottom of a birdcage and they’re trying to figure out how in the world did this happen. You must restore integrity back into our voting. I think this bill goes a long way to getting that done,” he said.