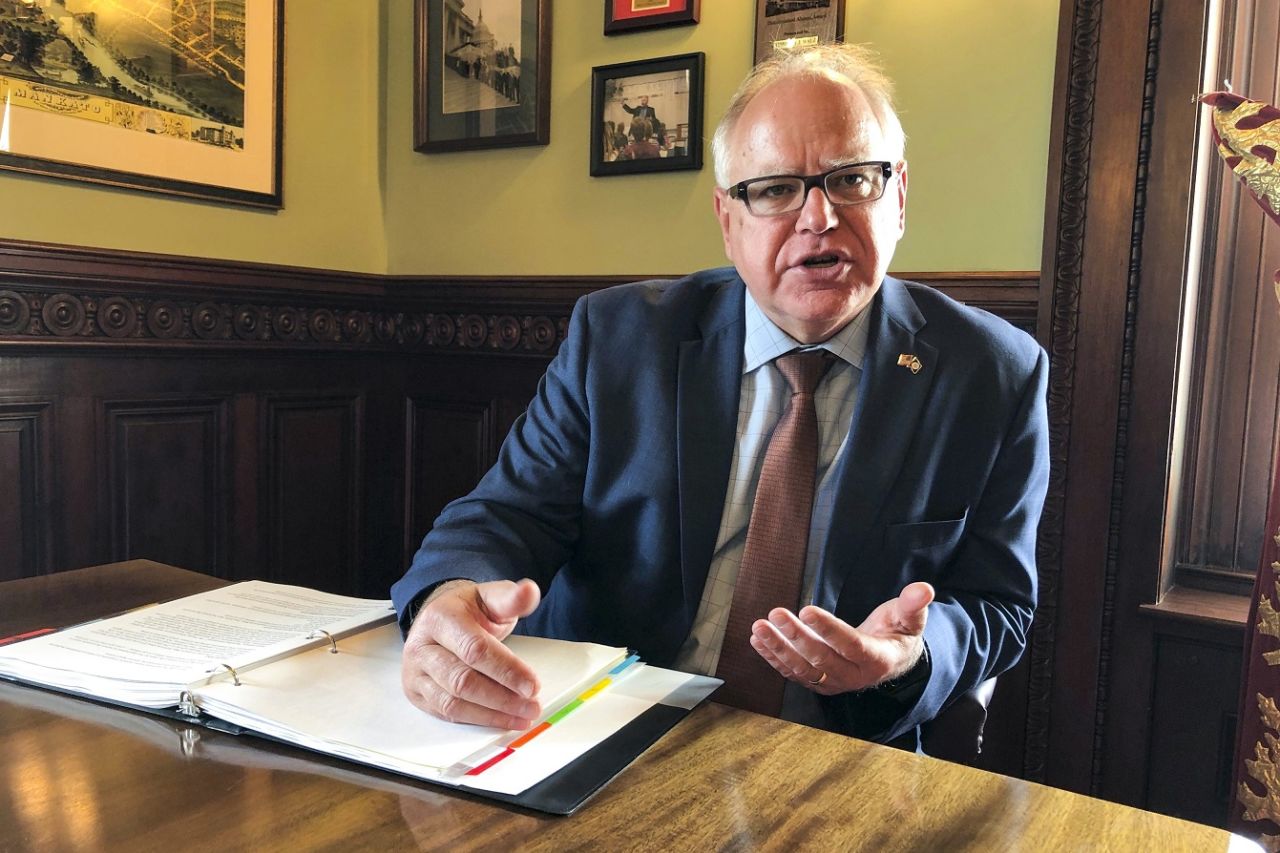 MINNEAPOLIS (AP) — Gov. Tim Walz proposed a $518 million capital investment package Monday that includes $150 million for rebuilding neighborhoods hit by unrest after the death of George Floyd last May and $43 million in security upgrades for the state Capitol complex, which has been ringed by fencing since last summer’s protests.

Walz visited a University of Minnesota health sciences building that the Legislature funded in 2017 to highlight how nearly half of his Local Jobs and Projects Plan, commonly known as a bonding bill, would support asset preservation projects at state agencies and higher education institutions statewide.

His proposal includes $490 million in borrowing plus $28 million in cash out of the state’s general fund. It’s much smaller than a $1.9 billion package, the largest in state history, that lawmakers passed in October. But the Legislature usually passes its big bonding bills in even-numbered years. The budget is the top priority in odd-numbered years like this one, and Budget Commissioner Jim Showalter said the size is “right on track” with bonding bills approved in previous budget sessions.

The Democratic governor acknowledged at a news conference that funding to benefit Minneapolis and St. Paul has become contentious amid last summer’s upheaval and calls by some local officials to “defund the police.” He asked legislative leaders in a letter Monday to keep trying to reach a compromise on his proposed $35 million fund to bolster security during the trials of four former police officers charged in Floyd’s death, which the Democratic-controlled House rejected last Thursday. With the first trial just two weeks away, Walz told reporters he’s not going to expend much more effort on that request.

Walz criticized Republican lawmakers who have been reluctant to approve more money for Minneapolis amid the ongoing dispute over the future of policing in the city. He said “a whole bunch of small business owners” were caught up in the looting and arson and deserve help.

“Minnesotans are all in this together,” he said, whether it’s relief after a tornado in Faribault, flooding in the Red River Valley or unrest in Minneapolis.

“If we start going down that road and start Balkanizing how we do everything, then why would Minneapolis support money for a road up in Roseau, or whatever it might be?” he said. “And that’s a dangerous place for a state and a nation to be in.”

Walz said he didn’t know full details of his Capitol security proposal, which came from an advisory committee led by Lt. Gov. Peggy Flanagan, but indicated it includes metal detectors. He said the plan was in the works well before Floyd’s death or the insurrection at the U.S. Capitol on Jan. 6, when there was also a peaceful pro-Trump rally at the statehouse.

The governor said the purpose is “not to make a fortress out of the Capitol, but to make it safe for visitors and those that are working there.”

Other highlights of the package include $100 million for affordable housing, $63 million and $57 million for addressing deferred maintenance in the separate Minnesota State and University of Minnesota higher education systems, respectively, and $10 million for Minnesota’s share of design and environmental work for a second daily Amtrak train between St. Paul, Milwaukee and Chicago with stops in Red Wing and Winona.

Democratic Rep. Fue Lee, of Minneapolis, who chairs the House Capital Investment Committee, said in a statement that the governor’s proposal “puts Minnesota on the right track when it comes to creating new jobs, investing in our communities, and keeping a focus on inclusion and equity.”

Sen. Tom Bakk, of Cook, a former Democrat turned independent who chairs the same committee in the Republican-controlled Senate, was less committal, saying the budget and the coronavirus pandemic are the top priorities this year.

“At the appropriate time, I am hopeful the legislature and the Governor will again come together to produce a bonding bill focused on the critical needs of Minnesotans,” Bakk said in a statement.