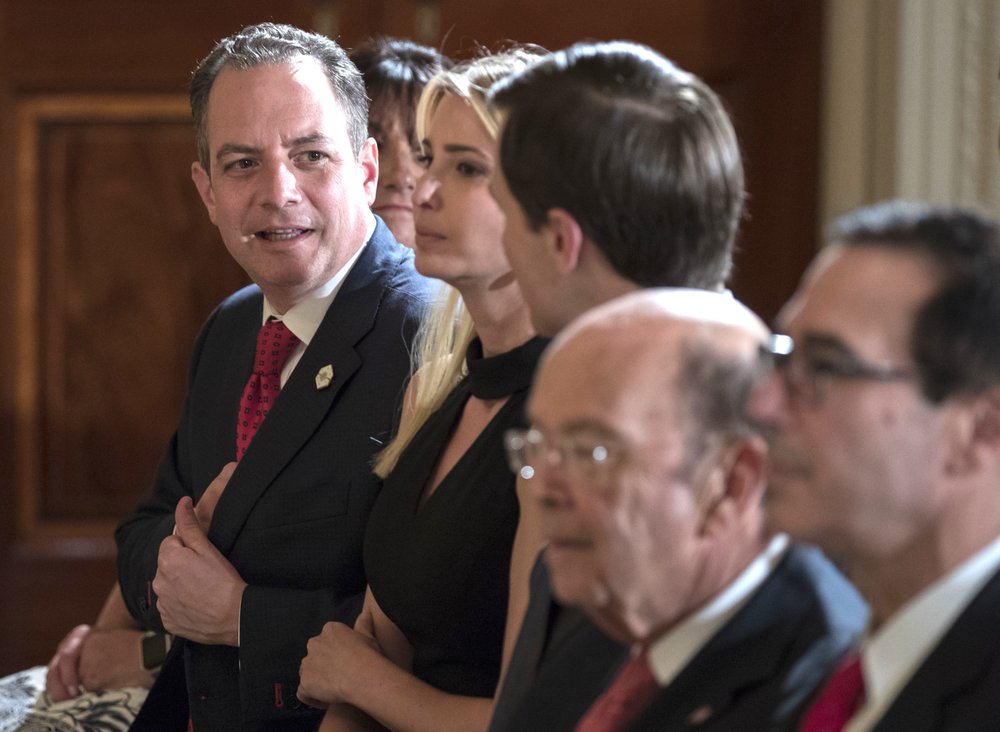 FILE - In this July 26, 2017 file photo, then White House Chief of Staff Reince Priebus, left, talks with senior adviser to President Donald Trump, Jared Kushne, third from right, in the East Room of the White House in Washington. Priebus, the former White House Chief of Staff to Donald Trump, has called Republican donors and power brokers in Wisconsin to discuss a possible big for governor or the U.S. Senate, according to a GOP strategist who spoke directly with Priebus about this deliberations. (AP Photo/Carolyn Kaster File)

MADISON, Wis. (AP) — Reince Priebus, a former White House chief of staff to Donald Trump, has called Republican donors and power brokers in Wisconsin to discuss a possible bid for governor or the U.S. Senate next year, according to a GOP strategist who spoke directly with Priebus about his deliberations.

The Republican described Priebus, who now works for a law firm and lives outside Washington, as far away from making a decision and largely listening to donors’ advice. The strategist was not authorized to comment publicly about Priebus’s discussions and spoke on condition of anonymity.

Priebus would only consider running for Senate if incumbent Republican Ron Johnson did not seek a third term, the strategist said. Johnson has not said when he will announce his intentions.

Republicans are searching for a candidate for what could be an open race for governor. Some began reaching out to Priebus after conservative talk radio host Jay Weber floated Priebus’ name, the strategist said.

Priebus served as Trump’s chief of staff for the first six months of Trump’s term in 2017 before being fired. He later patched things up with Trump and appeared with him at campaign rallies in Wisconsin last year.

After leaving Trump’s White House, Priebus returned to work for the Washington office of the Milwaukee-based law firm of Michael Best & Friedrich. He has lived in the Washington area for years and is no longer registered to vote in Wisconsin, according to the database of voter registrations maintained by the Wisconsin Elections Commission.

His residency would surely be an issue for him during any campaign, even though it would not bar him from serving in Congress or as governor. Priebus last voted in Wisconsin in the 2016 presidential election, when Trump narrowly won the state. President Joe Biden defeated Trump by fewer than 21,000 votes in Wisconsin last year.

Priebus, a native of Kenosha, was head of the Wisconsin Republican Party between 2007 and 2009 before spending the next six years as chairman of the Republican National Committee.

Priebus ran for office once before in the state, when he was beaten by Democrat Bob Wirch in a 2004 state Senate race.

Priebus is among several Republicans eyeing a possible run for governor in 2022. Tony Evers, a Democrat, has not yet said whether he will seek reelection. Former Republican Lt. Gov. Rebecca Kleefisch is building a campaign to run and several others are thinking about it, including U.S. Rep. Mike Gallagher, former U.S. Rep. Sean Duffy, Waukesha County Executive Paul Farrow, lobbyist Bill McCoshen and 2018 U.S. Senate candidate Kevin Nicholson.