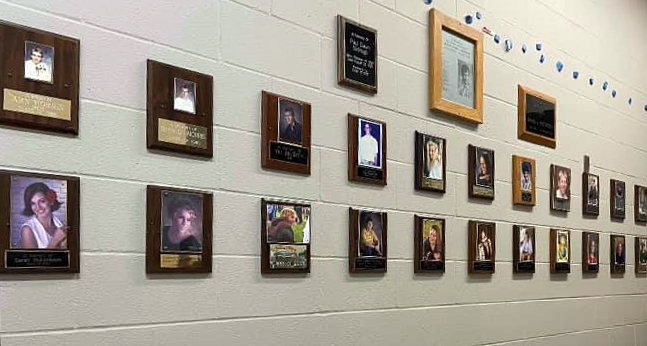 What started as a community controversy in June of 2020 turned into a genuine conversation about how to remember students in the School District of Holmen.

Last June, the district sent a letter to families asking them to gather images or plaques from a Memorial Wall that recognized those who died. The wall was going to be removed while the school was being renovated. District Administrator Dr. Kristen Mueller explained the focus of the district is to support learning, and memorials can be an ongoing reminder of a traumatic event. In a follow-up letter, she added the wall was not a complete representation of all lives lost at Holmen and that living memorials such as scholarships or run/walks may be fitting ways to honor a memory.

Families, community members, and students protested, and the school board created a committee to review the future of the Memorial Wall.

“There was not a policy in place for any of this, which was problematic being that this all kind of arose the way that it did last summer,” Linda Murray-Stollenwerk said.

Murray-Stollenwerk was one of the first to speak out after she received a letter asking her to pick up a plaque recognizing her daughter, Mia. Mia was diagnosed with juvenile Huntington’s when she was 8-years-old and passed away before graduation. One of her favorite places to be was at school.

The committee met every week before deciding on a recommendation that the Board of Education approved. The policy included relocating the memorial wall at the school. Existing memorials will remain intact, but no future memorials will be added to the wall. Future individuals who pass away while a student in the School District of Holmen can be recognized in yearbooks, at graduation, and in the graduate class collage if that is what the family wishes.

“The group that came together to discuss the memorial wall did so out of love for their family members, our community, and our schools,” Board of Education President Cheryl Hancock said. “The policy that resulted is a testimony of Holmen’s tradition of bringing stakeholders together to find meaningful solutions.”

Families, the Board of Education, and committee members were invited to an unveiling of the new Holmen High School Memorial Wall Wednesday evening.

District Administrator Dr. Kristin Mueller stated, “This evening is about remembering those who hold a special place in our hearts. As we say in Holmen, ‘Once a Viking, always a Viking.’”

Murray-Stollenwerk said the Memorial Wall was an important conversation for the community. Her daughter was not recognized at graduation, whereas other students were. Some families had loved ones on the wall, but others were not invited to have a display.

“It’s good to have a policy in place,” she said. “It doesn’t matter if they were in kindergarten, middle school, or high school. They’re going to be part of that class. These things needed to be resolved. The administration was very good about addressing our concerns as parents and the community’s concerns. I think there was a realization that this was a bigger deal than maybe they had thought it was. I don’t think they intentionally tried to cause a huge problem with this.”

There was some pushback, but for the most part, Murray-Stollenwerk thought the administration stepped up for families. Some did bring forward concerns about what role the school should play when it comes to handling grief.

“It is hard to talk about,” Murray-Stollenwerk said. “There are some students who have a hard time looking at their friends who have passed away. For me, that’s a learning opportunity. It’s a chance to talk about the circumstances surrounding why they’re gone, why are sad, and why they are angry. I think that belongs in the school. If you have a student killed on Friday night in a car accident, and their friends are back at school Monday, and nobody is talking about it, that’s problematic.”

Creating that policy was not an easy task. The committee met all summer and was comprised of parents, teachers, school board representatives, and community members. There was not a lot of existing policy among Wisconsin schools to use as a model, so committee members used examples in place throughout Minnesota school districts.

“We worked hard to make sure we thought about all kids, and it wasn’t just what was good for one kid,” Murray-Stollenwerk said. “They are an important part of Holmen and Holmen’s history. Once a Viking, always a Viking. Holmen is very cognizant of inclusion, and their equity piece in their vision values statement is something that we really tried to use as a guideline.”

She was pleased with where the new Memorial wall was placed in the new wing of the high school where the Fine Arts Center meets the Sports Complex.

“It is a very high visibility area,” Murray-Stollenwerk said. “There are going to be a lot of people walking past that, and for our kids to be remembered with their class is the way they should be remembered.”

She hoped other school districts can look at Holmen’s new policy and also establish a plan for how to honor students.