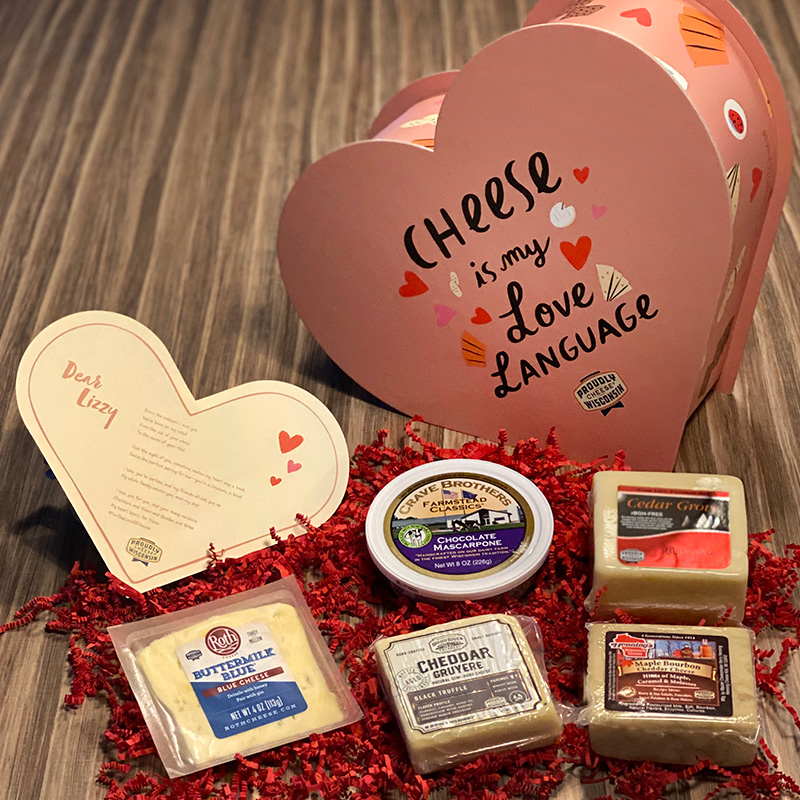 A passion for Wisconsin’s signature dairy product had consumers from all 50 states reaching out ‘For the Love of Cheese.’

The ‘For the Love of Cheese‘ campaign was a collaborative effort between Dairy Farmers of Wisconsin’s public relations and social media teams.

“We know the consumers love a feel-good story, and they are always looking for something new,” Lizzie Duffey, public relations manager for Wisconsin Cheese said. “Around the holidays, we saw cheese advent calendars pop up all over the place, so we put our heads together, and we were trying to find another holiday to really take advantage of these consumer preferences of cheese gifts. I think we really tapped into something special.”

Encouraging consumers to think outside the box this Valentine’s day, they spread a cheesy love language with the chance to nominate and surprise someone with a free, limited-edition gift box filled with Wisconsin cheese. With 500 free boxes to give away, 20,000 consumers from all 50 states eagerly signed up for the chance to win.

The fresh idea caught the attention of several influencers, including Drew Barrymore who shared her enthusiasm for Wisconsin Cheese on The Drew Barrymore Show.

“This is a continuing and evolving relationship that we’ve been working on,” Tina Peterson, national program manager of media appearances, said. “We actually pitch content about six months in advance, so this is something that’s in the works for many months behind the scenes before we hopefully land some of those really crucial placements. We know Drew Barrymore is a huge cheese fan, so why not send her a customized box of world-famous Wisconsin cheese?”

Peterson credited the custom cheese boxes for the chance to get in front of Barrymore and Ross and earn large media attention not only on that show but also in key editorial outlets such as Food and Wine, as well as a plug from the Today Show.

“They are true influencers in their own right, and consumers are listening to them,” Duffey said. “For us to have these really strong connections with the editors and with the producers is so crucial for keeping Wisconsin cheese in the news and for the dairy farming community.”

In addition to media attention, Dairy Farmers of Wisconsin anticipated a surge in social media posts talking about For the Love of Cheese. Those who signed up to win a personalized cheese box were also asked to provide social media information.

“We already saw a huge amount of eyes on social media from consumers who were just trying to enter, so we expect to see that excitement continue as the boxes land on the doorstep to some of our biggest fans,” Duffey said.

Mid-West Farm Report spoke with Dairy Farmers of Wisconsin before the cheese boxes were shipped, but even then, Peterson said the idea earned millions of dollars in media attention.

“We know that we’ve already garnered over $5 million in media value, and that’s earned value which means it is pretty much free,” she said. “It’s our efforts of pitching and connecting, getting those publicans, and getting those airings on national television. Those are all due to those relationships we built by pitching this content six months in advance and then continue following up on those.”

The public relations team works on a 50 to 1 ratio, which Peterson said gives a large return on investment for dairy farmers who fund their efforts through checkoff dollars.
For every 100 pounds of milk produced and marketed in the state, $.10 goes to Dairy Farmers of Wisconsin to promote Wisconsin-produced dairy products. However, she believes this campaign well exceeded that ratio.

“This is a great example of how making those connections leads to lasting impressions,” Peterson said.

When consumers signed up to win a box, there was also a push to buy cheese online with a directory listed for cheese companies and retailers that have Valentine’s-themed cheese boxes. That nomination or sign-up site had more than 135,000 page views which put eyes not only on the directory but also recipes and food-service partners that sell heart-shaped pizzas using Wisconsin cheese or other unique ideas.

Beyond the online signup and reach through various media platforms, Dairy Farmers of Wisconsin also did a big in-store push for Wisconsin cheese.

“This was actually one of the largest campaigns we have done statewide with our local retailers,” Duffey said. “If you visit your local cheese shop or grocery store, you may see some of our For the Love of Cheese branding in the store.”

Although Valentine’s Day will come and go, Dairy Farmers of Wisconsin continues sharing a love for cheese by looking ahead to future campaigns such as Wonders of Wisconsin which will be an all-inclusive campaign. There will also be courses for consumers to enroll in.

“We know in Wisconsin, 90 percent of our milk is made into cheese and 90 percent of that cheese is sold outside of Wisconsin, so really driving consumers on that national level is one of our main PR focuses,” Peterson said.

Those who want to keep up with what is happening with Wisconsin Cheese can visit wisconsincheese.com. That page also has information about how to order cheese online as well as recipes and other content.