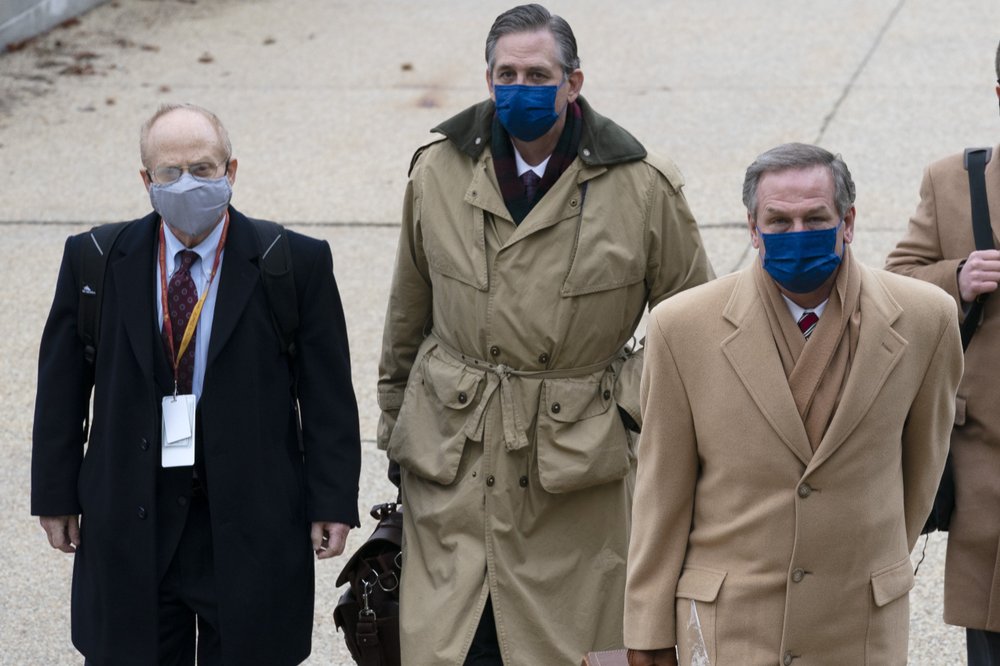 From left, David Schoen, Bruce Castor and Michael van der Veen, lawyers for former President Donald Trump, arrive at the Capitol on the third day of the second impeachment trial of Trump in the Senate, Thursday, Feb. 11, 2021, in Washington. (AP Photo/Jose Luis Magana)

WASHINGTON (AP) — Lawyers for Donald Trump defended him against impeachment Friday by accusing Democrats of waging a campaign of “hatred” against the former president and manipulating his words in the lead-up to the deadly siege of the U.S. Capitol. Their presentation included a blizzard of their own selectively edited fiery comments from Democrats.

In hours of arguments, the Trump legal team characterized the impeachment case as a politically motivated “witch hunt” — an outgrowth, they said, of years of efforts to drive him from office — and they sought to reduce the case to Trump’s use of a single word, “fight,” in a speech preceding the Jan. 6 riot. They played dozens of clips showing Democrats, some of them senators now serving as jurors, using the same word to energize supporters in speeches railing against Trump.

“You didn’t do anything wrong” in using the word, Trump attorney David Schoen told the senators. “But, please, stop the hypocrisy.”

The Trump defense team left out that what Trump was doing in telling his supporters to “fight like hell” was to undermine a national election after every state had verified its results, after the Electoral College had affirmed them and after nearly every election lawsuit filed by Trump and his allies had been rejected in court. Instead, they contended, he was telling the crowd to support primary challenges against his adversaries and to press for sweeping election reform — something he was entitled to do.

The case is speeding toward a conclusion and near-certain acquittal, perhaps as soon as Saturday. The defense arguments and the quick pivot to the Democrats’ own words deflected from the central question of the trial — whether Trump incited the assault on the Capitol — and instead aimed to place impeachment managers and Trump adversaries on the defensive.

After a two-day effort by Democrats to sync up Trump’s words to the violence that followed, including through raw and emotive video footage, defense lawyers suggested that Democrats have typically engaged in the same overheated rhetoric as Trump.

But in trying to draw that equivalency, the defenders minimized Trump’s monthslong, efforts to undermine the election results and his urging of followers to do the same. Democrats say that long campaign, rooted in a “big lie,” laid the groundwork for the mob that assembled outside the Capitol and stormed inside. Five people died.

Without Trump, who in a speech at a rally preceding the violence told supporters to “fight like hell,” the violence would never have happened, Democrats say.

“And so they came, draped in Trump’s flag, and used our flag, the American flag, to batter and to bludgeon,” Rep. Madeleine Dean, one of the impeachment managers, said Thursday as she choked back emotion.”

On Friday, as defense lawyers repeated their own videos over and over, some Democrats chuckled and whispered among themselves as almost all of their faces flashed on the screen. Some passed notes. Connecticut Sen. Richard Blumenthal threw up his hands, apparently amused, when his face came on the screen. Minnesota Sen. Amy Klobuchar rolled her eyes. Most Republicans watched intently.

During a break, some joked about the videos and others said they were a distraction or a “false equivalence” with Trump’s behavior.

“Well we heard the word ‘fight’ a lot,” said Maine Sen. Angus King, an independent who caucuses with the Democrats.

Colorado Sen. Michael Bennett said it felt like the lawyers were “erecting straw men to then take them down rather than deal with the facts.”

“Show me any time that the result was that one of our supporters pulled someone out of the crowd, and then we said, ‘That’s great, good for you,’” said Delaware Sen. Chris Coons.

Trump’s defenders told senators that Trump was entitled to dispute the 2020 election results and that his doing so did not amount to inciting the violence. They sought to turn the tables on prosecutors by likening the Democrats’ questioning of the legitimacy of Trump’s 2016 win to his challenge of his election loss. When Trump implored supporters to “fight like hell” on Jan. 6, he was speaking figuratively, they said.

“This is ordinarily political rhetoric that is virtually indistinguishable from the language that has been used by people across the political spectrum for hundreds of years,” said Michael van der Veen, another Trump lawyer. “Countless politicians have spoken of fighting for our principles.”

The defense team did not dispute the horror of the violence, painstakingly reconstructed by impeachment managers earlier in the week, but said it had been carried out by people who had “hijacked” for their own purposes what was supposed to be a peaceful event and had planned violence before Trump had spoken.

“You can’t incite what was going to happen,” he said.

Acknowledging the reality of the January day is meant to blunt the visceral impact of the House Democrats’ case and quickly pivot to what Trump’s defenders see as the core — and more winnable — issue of the trial: Whether Trump actually incited the riot. The argument is likely to appeal to Republican senators who want to be seen as condemning the violence but without convicting the president.

Anticipating defense efforts to disentangle Trump’s rhetoric from the rioters’ actions, the impeachment managers spent days trying to fuse them together through a reconstruction of never-been-seen video footage alongside clips of the president’s monthslong urging of his supporters to undo the election results.

Democrats, who concluded their case Thursday, used the rioters’ own videos and words from Jan. 6 to try to pin responsibility on Trump. “We were invited here,” said one Capitol invader. “Trump sent us,” said another. “He’ll be happy. We’re fighting for Trump.”

The prosecutors’ goal was to cast Trump not as a bystander but rather as the “inciter in chief” who spread election falsehoods, then encouraged supporters to come challenge the results in Washington and fanned the discontent with rhetoric about fighting and taking back the country.

The Democrats also are demanding that he be barred from holding future federal office.

But Trump’s lawyers say that goal only underscores the “hatred” Democrats feel for Trump. Throughout the trial, they showed clips from Democrats questioning the legitimacy of his presidency and suggesting as early as 2017 that he should be impeached.

“Hatred is at the heart of the house managers’ fruitless attempts to blame Donald Trump for the criminal acts of the rioters based on double hearsay statements of fringe right wing groups based on no real evidence other than rank speculation,” van der Veen said.

Trump’s lawyers note that in the same Jan. 6 speech he encouraged the crowd to behave “peacefully,” and they contend that his remarks — and his general distrust of the election results — are all protected under the First Amendment. Democrats strenuously resist that assertion, saying his words weren’t political speech but rather amounted to direct incitement of violence.

The defense lawyers also returned to arguments made Tuesday that the trial itself is unconstitutional because Trump is no longer in office. The Senate rejected that contention as it voted to proceed with the trial.

On Thursday, with little hope of conviction by the required two-thirds of the Senate, Democrats delivered a graphic case to the American public, describing in stark, personal terms the terror they faced that day — some of it in the very Senate chamber where senators now are sitting as jurors. They used security video of rioters searching menacingly for House Speaker Nancy Pelosi and Vice President Mike Pence, smashing into the building and engaging in bloody, hand-to-hand combat with police.

They displayed the many public and explicit instructions Trump gave his supporters — long before the White House rally that unleashed the deadly Capitol attack as Congress was certifying Democrat Joe Biden’s victory.