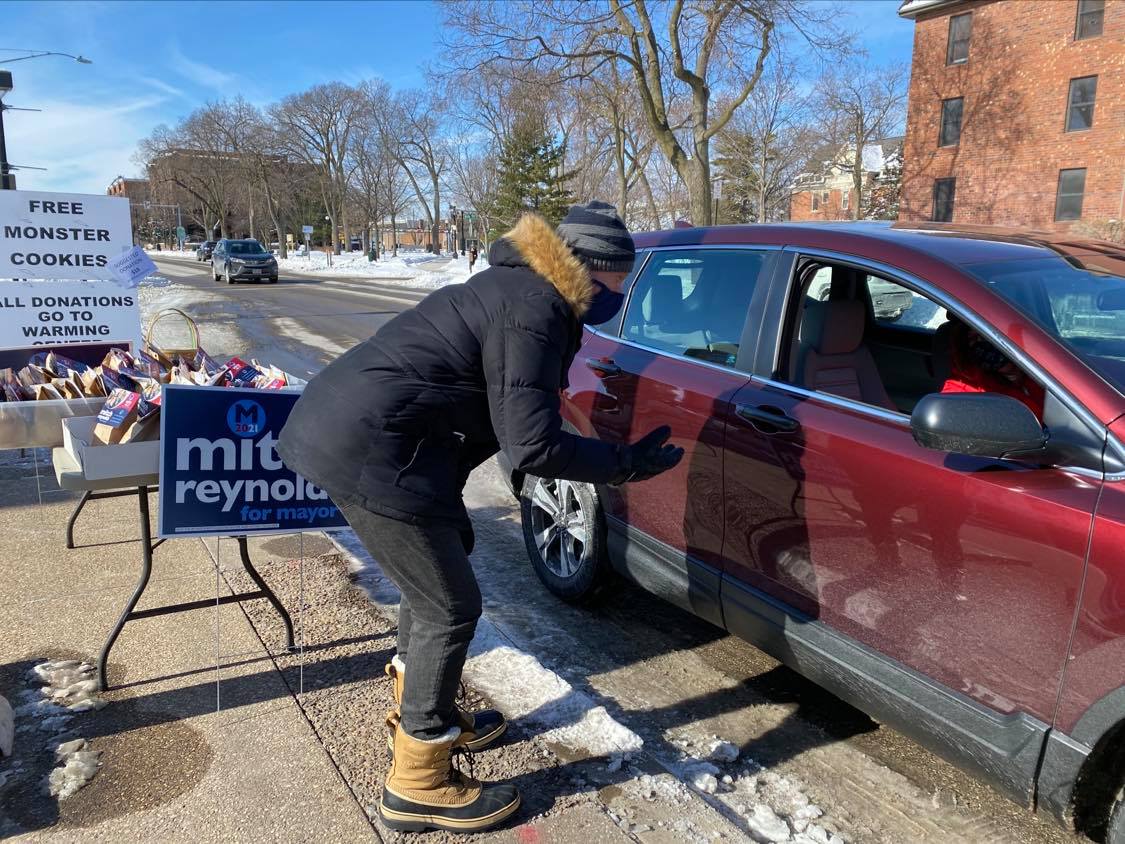 That was the evolution Wednesday in front of the Main Street Public Library, and it made La Crosse mayoral candidate Mitch Reynolds happy, and a bit sad.

The team turned a cookie giveaway to meet with Reynolds — and talk about why he’s running for mayor — into a charity drive to help the Warming Center downtown.

There were 70 cookies handed out and $878 in donations headed to the Catholic Charities center.

“So this is it, I’m running for mayor and people are paying attention and what it means is that I can have an impact for this moment in time, until Feb. 16,” Reynolds said. “Whether I make it through the primary or not, I can have an impact on our community, in some kind of small way.”

Reynolds gave credit to the Beer By Bike Brigade (BBBB) for swooping in to snag the rest of the cookies and make a donation, as well. BBBB is a community group best known for probably two things: Organizing outings that involve biking, then beer, and putting together charity drives that pay off student lunch debt at schools throughout the Coulee Region.

When it comes to homelessness, Reynolds says he has experienced it and has a plan for helping that part of the La Crosse community.

“As a young man, I actually became homeless in a way,” Reynolds wrote. “I didn’t identify my life condition at the time as anything exceptional. In fact, it never occurred to me that I wouldn’t have to beg couch stays off friends. It was just one kind of homelessness. And not unlike the kind that many young college dropouts encounter when they leave home at 18 without much of a plan.”

The plan for Reynolds, as mayor, would be what he calls “housing first.” Basically, ensure that housing is available to those who need it.

“(They) key is making city government the allocating agency for HUD dollars from feds,” Reynolds said of specific policy as mayor. “We also need to look at city facilities — all facilities — as crisis shelters when those who are temporarily homeless face the reality of no beds available in the most difficult weather conditions.”

There are multiple groups in the community trying to help in that way, including the Coulee Collaborative to End Homelessness.

“Nothing else provides as much stability as that one simple thing,” Reynolds wrote. “Let us all work together to ensure that our most vulnerable citizens have a home. With enough collaborative effort we can achieve a community where all adults and children may still have to face some pretty stiff challenges. But, at the very least, they will face those challenges in their own homes.”

Any cookies that were left over were delivered to Warming Center clients Wednesday evening.

This week, the Warming Center has had to move clients to the Econo Lodge to help combat a COVID-19 surge at the downtown facility. Homeless families who had been at the motel will be moved elsewhere.

“I don’t want those who live on the edges of our society — who are marginalized or vulnerable — I don’t want them to feel like it’s really just beautiful talk, (but) actually about action that we can take,” Reynolds said. “We gotta make lives better so that we’re not funding the health and well being of the people who are living on our streets with bake sales in front of the damn library.”