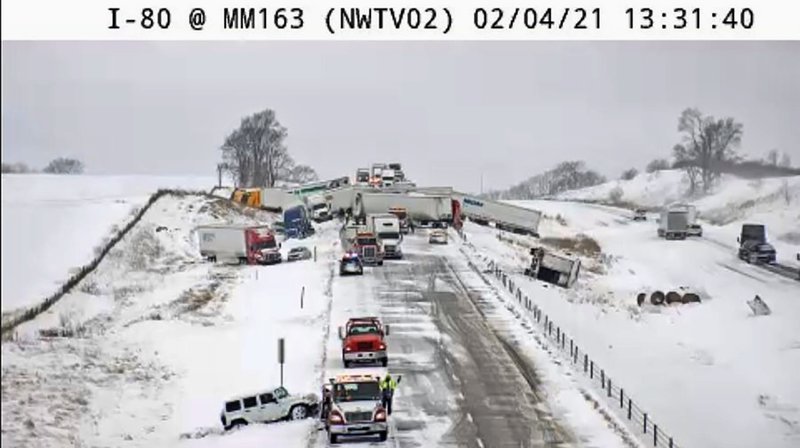 This image provided by the Iowa Transportation Department from a traffic camera shows a massive pileup on Interstate 80, Thursday, Feb. 4, 2021, west of Newton, Iowa. A snowy section of Interstate 80 was closed Thursday afternoon in central Iowa, after the massive crash involving roughly 40 vehicles. Iowa authorities closed the eastbound lanes of the interstate west of Newton after the chain-reaction crash. (Iowa Transportation Department via AP)

Iowa authorities closed the eastbound lanes of the interstate west of Newton after the chain-reaction crash happened shortly before noon. The Iowa State Patrol said two troopers were in the middle of assisting with several multicar crashes in the area when the larger pileup happened.

Several serious injuries have been reported in the crash but no deaths, Iowa Transportation Department spokeswoman Andrea Henry said. The State Patrol said neither trooper was injured in the crash.

Pictures of the crash show several semitrailer trucks sideways across the highway and at least six semi trucks that slid off the road.

Officials are urging drivers to stay off the roads across most of eastern Iowa because they were mostly covered with snow Thursday after a storm moved across the state.