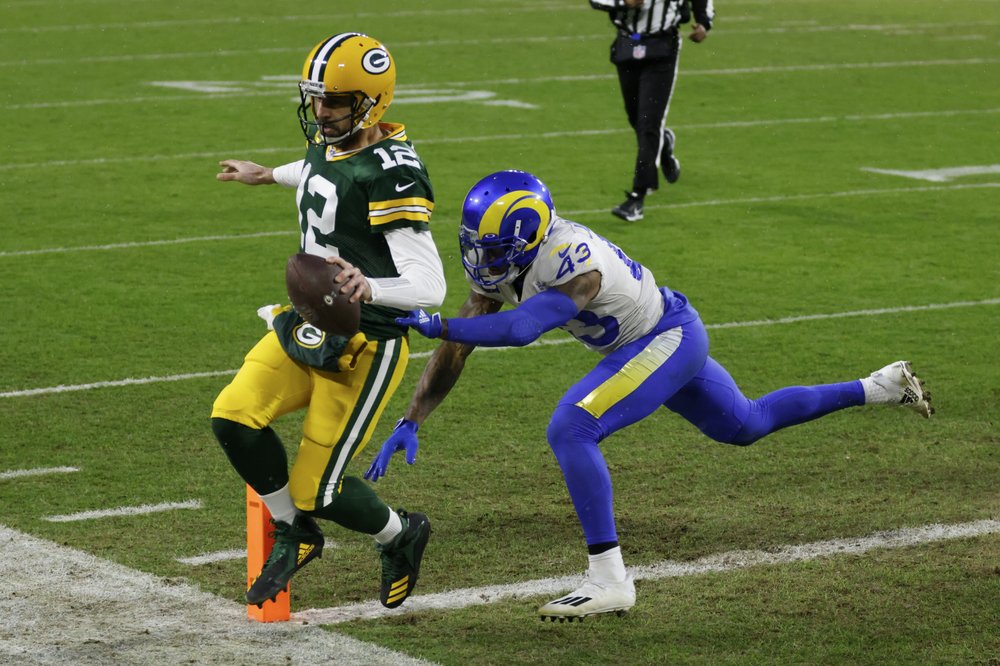 GREEN BAY, Wis. (AP) — Aaron Rodgers made sure he’d play an NFC championship game at home for the first time in his Hall of Fame-caliber career.

The Packers reached the NFC championship game for the fourth time in the last seven seasons as they chase their first Super Bowl berth in a decade. It will be their first at Lambeau Field since hosting for the 2007 season, when they fell to the New York Giants 23-20 in overtime.

Green Bay won the Super Bowl for the 2010 season as the NFC’s No. 6 seed, and has lost at Seattle, Atlanta and San Francisco in its last three conference championship game appearances.

Saturday’s game showed what a home-field advantage can mean, even with far less than capacity on hand due to the pandemic. The Packers played in front of 8,456 fans – a crowd that included paying spectators for the first time all season – but that small crowd made plenty of noise as the Packers built an early lead with snow flurries falling for much of the first half.

“It’s special. There’s absolutely nothing like it,” Rodgers said. “We have really missed that part of this experience. To run out of the tunnel tonight with fans was unbelievable. It’s hard to explain how much the presence means on the field and just having that energy from the crowd.”

Buoyed by that crowd, the Packers (14-3) often seemed on the verge of putting the game away. But the Rams (11-7) continued to hang around. Green Bay finally sealed the victory with a 58-yard completion from Rodgers to Allen Lazard with 6:52 left.

The Packers scored on each of their first five series and led 25-10 early in the third quarter. Even when the Packers began a drive at their 25 with 29 seconds and two timeouts left until halftime, Rodgers threw long completions to Davante Adams and Robert Tonyan to set up Mason Crosby’s 39-yard field goal as time expired.

Green Bay also settled for Crosby’s 24-yard field goal after having first-and-goal at the 4 on its opening series. The other three drives resulted in a 1-yard touchdown catch by Adams and 1-yard scoring runs by Rodgers and Jones.

Rodgers’ touchdown run was the first by a Packers quarterback in a playoff game at Lambeau Field since Bart Starr’s winning sneak in the Ice Bowl against Dallas on Dec. 31, 1967.

Jones’ touchdown came after he opened the second half with a 60-yard burst up the middle against a defense that hadn’t allowed a run from scrimmage of longer than 27 yards all season.

After the Rams finally forced a punt midway through the third quarter, they capitalized with Akers’ 7-yard touchdown run on a direct snap. They cut it to 25-18 with a nifty 2-point conversion: Van Jefferson caught a pass from Goff and lateraled to Akers, who strolled into the left corner of the end zone.

The Rams forced another punt and got the ball at their 6, but Kenny Clark’s sack stalled the drive.

Green Bay’s A.J. Dillon fumbled on the ensuing series, but Rodgers recovered at the Packers 31 and advanced 3 yards. Three plays later, Rodgers hit Lazard, who caught the ball around the Rams 25 and raced into the end zone for the clinching touchdown.

The Rams’ season is over.

The Packers host either the New Orleans Saints or Tampa Bay Buccaneers on Jan. 24.