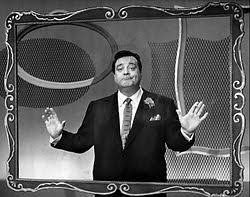 In January of 1961, D.J. Petruccelli was introduced to the Thursday Rotary Club as the new manager of the La Crosse Chamber of Commerce.  The 32-year-old Petruccelli spoke about a campaign to create a more positive attitude in La Crosse, called “Operation Pride.”  Petruccelli became known for bringing famous speakers like Ann Landers and Ronald Reagan to the Chamber’s annual dinner, and he arrived in La Crosse just in time to help organize the first Oktoberfest that year.

CBS introduced a new TV game show that Friday night, called “You’re in the Picture,” hosted by Jackie Gleason. Arthur Treacher, Pat Harrington, and other panelists stuck their heads through holes in a large picture, and asked questions of Gleason to figure out what was going on in the picture.  Gleason pulled the plug on the show after just one episode.    That same night in Hollywood, the star of the Broadway musical “Bye Bye Birdie” was filming the pilot episode of a new sitcom that would start in the fall of ’61.  It ran for more than one episode…five years, in fact.  They called it “The Dick Van Dyke Show,” starting in 1961, yesterday in La Crosse.