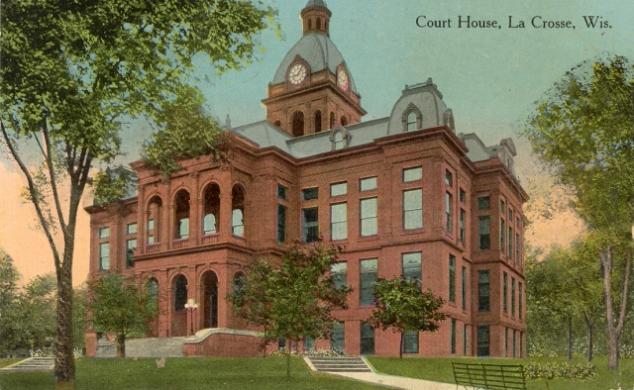 Historic preservation was not a priority in La Crosse during the 60’s and 70’s.  In those two decades, the city replaced its turn of the century post office, city hall, and courthouse with newer buildings, and took the old ones down.  The domed courthouse was demolished in April of 1965 to make way for a Montgomery Ward store.  But before it came down, the courthouse briefly served as a theater.  The new La Crosse Community Theatre put on the courtroom drama “The Night of January 16th” inside the building’s actual courtroom.  LCT wouldn’t get its own building until 1968.

If an old building in La Crosse wasn’t torn down, it was often given a modern look with big metal grillwork installed on the outside to cover up the old walls.  That was done to the old Wards store on 5th, when it became Osco Drug (now Anytime Fitness), and Rowley’s Office Equipment at 3rd and Main, now the Crow Bar.  And in January of 1965, the Elks Club began a $30,000 exterior makeover of its building at 5th and State.  The grills were taken down years ago.  It’s now the Cornerstone Church.

Channel 8 had a new kids program called “Mister Mayor” on Saturday mornings.  It was a live-action show starring Bob Keeshan as a small-town mayor.  “Mister Mayor” was Keeshan’s weekend gig on CBS for a year.  Monday through Friday, he was still playing “Captain Kangaroo” in 1965, yesterday in La Crosse.