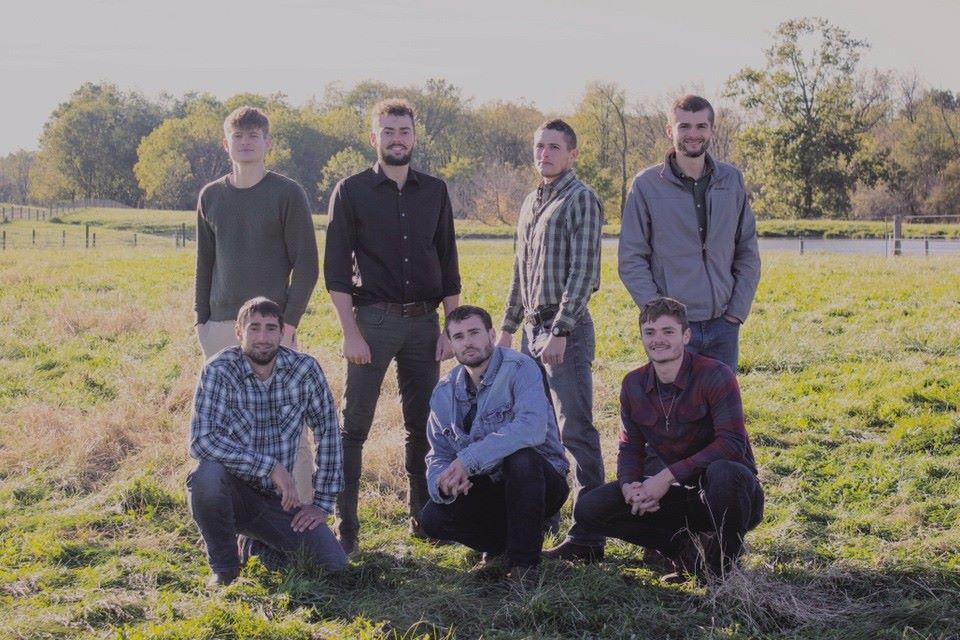 The seven Hitzfield brothers are all part of the operation that started when their parents, Lee and Beth Hitzfield were married in 1981 (photo courtesy: Seven Sons Farms).

One family, seven sons, and a big belief in creating consumer confidence are just pieces of a larger equation that helped Seven Sons Farms become what it is today.

The oldest of the sons, Blake, said the operation’s tasks, such as collecting 6,000 eggs a day, require many helping hands.

“All of us sons are involved along with our parents, and we also have a great team,” he said. “I’m very blessed to be a part of this. It is a great time to be in small-scale farming.”

In addition to family, the farm has 25 full-time employees that work in every different area of the farm from moving cattle and gathering eggs to completing order fulfillment so they can deliver food to people’s doorsteps.

The farm has been very open to visits from producers and consumers alike. They offer farm mentorship for those who are new to pasture-based food production and participate as guest speakers for workshops across the nation. One of their more recent speaking engagements included a workshop on sustainable direct marketing with the Land Stewardship Project based in Minnesota.

“What we’ve seen in the past 20 years is an element of distrust in our food system for various reasons,” he said. “COVID-19 escalated some of those as well when it comes to just food security. I think there has definitely been a push from the consumer side to develop that relationship with their local farmers. It’s easy to think that food just comes from the grocery store, and when the grocery store shelves are empty, you start thinking about finding a farm.”

Out of all of the negativity in the pandemic, Blake saw growth in the local food movement as one silver lining.

“I am encouraged to see that small, family farms are there to help in this testing time,” he said.

Their farm saw its fair share of ups and downs over the years. Neither Lee nor Beth Hitzfield, the founders of Seven Sons Farms, were raised on farms. After getting married in the early 1980s, they purchased a conventional farm and raised confinement hogs to sell to Tyson foods.

Like most farms in the area at the time, they had 1,500 acres of row crops filled with corn and beans.

“We kind of hit a roadblock in the 90s,” Blake said. “There were two main things. One was a health crisis in the family. This was also a time period where small farms really felt the crunch where they needed to scale to become profitable or get out. Unfortunately, we were losing a bridge, which made it even harder to be profitable.”

Beth was diagnosed with rheumatoid arthritis, and Blake said there wasn’t much conventional medicine could do at the time. They found their solution from an unexpected source.

“It was through a soil agronomist who shared his understanding of soil health and how that relates to the human body and how we are what we eat,” Blake said. “It was able to do a lot to improve our mom’s health, and that was really a light bulb moment for our family to realize that not only was our farm not profitable but we also no longer believed in that type of agriculture system.”

Seven Sons sold the confinement hogs and planted their row crops to hay and pasture land.

“We put livestock back out on the land, and this is where the term regenerative comes into play,” he explained. “We’re building upon what we already have without using inputs such as synthetic fertilizers and herbicides. With regenerative agriculture, it is constantly building upon itself, and we are just stewarding our resources to allow natural life to build.”

Although their farm lost acreage during those challenging times, Blake believed they gained value in producing food products with regenerative agriculture rather than a commodity.

“Our farm went from down to 500 acres and not supporting one family to now having 500 acres and supporting 25 full-time positions,” he said. “We developed a relationship with customers and were able to become price makers instead of price takers. It is exciting to see that on our farm, and it is even more exciting to see it happen on other farms.”

A large part of their success was creating an early online presence.

“We can all compete on the same playing field with Walmart and Kroger because it is all based on where you’re located and the search terms used.”

Seven Sons Farms developed its first website in the early 2000s to draw awareness to their operation. They sold wholes, halves, and quarters early on, and used the site to let customers know there was an on-farm store.

“That has changed to where it is now,” Blake said. “We’ve started some buying clubs and home delivery in the past three to four years. That has been very helpful from a consumer standpoint because farmers aren’t very convenient to buy from. Farms are located out in the country, and the majority of customers are in the cities. We needed a convenient way to get our proteins, the foods that we’re raising into the hands of customers.”

The family worked with local carriers in the cities as well as FedEx and UPS to “put wings” on the farm. An important part of staying relevant was to understand the consumer experience. Blake said their family uses the same shopping platform they expect their customers to use.

“Instead of just walking into our freezer and pulling out whatever is on the list that my wife would send me to bring home, we are going to force ourselves to go through that same buying experience through our website or our own farm store,” Blake said. “It is really eye-opening because you may realize how inconvenient you are in some areas. Maybe your website is too many clicks to the checkout page. Maybe your farm store hours are not very convenient. Put yourself in your customers’ shoes.”

Their customers come from all demographics. Although Seven Sons Farms focuses heavily on their local region within a reasonable driving distance from the farm, they do ship products nationwide.

“Food is something that brings people together and affects every demographic,” Blake said. “It really seems in the last several years, just about everybody cares about what they’re putting their body and what they are feeding their families.”