US clears Moderna vaccine for COVID-19, 2nd shot in arsenal 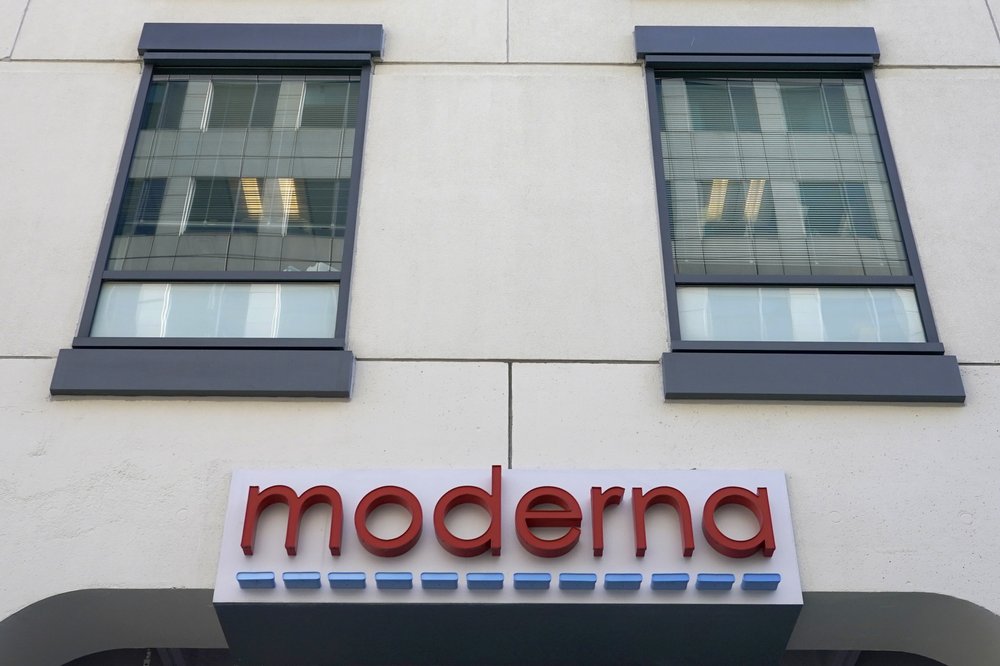 FILE - In this Dec. 15, 2020, file photo, a sign for Moderna, Inc. hangs on its headquarters in Cambridge, Mass. The U.S. is poised to give the green light as early as Friday, Dec. 18, to a second COVID-19 vaccine, a critical new weapon against the surging coronavirus. Doses of the vaccine developed by Moderna Inc. and the National Institutes of Health will give a much-needed boost to supplies as the biggest vaccination effort in the nation’s history continues. (AP Photo/Elise Amendola, File)

WASHINGTON (AP) — The U.S. added a second COVID-19 vaccine to its arsenal Friday, boosting efforts to beat back an outbreak so dire that the nation is regularly recording more than 3,000 deaths a day.

Much-needed doses are set to arrive Monday after the Food and Drug Administration authorized an emergency rollout of the vaccine developed by Moderna Inc. and the National Institutes of Health.

The move marks the world’s first authorization for Moderna’s shots. The vaccine is very similar to one from Pfizer Inc. and Germany’s BioNTech that’s now being dispensed to millions of health care workers and nursing home residents as the biggest vaccination drive in U.S. history starts to ramp up.

Early results of large, still unfinished studies show both vaccines appear safe and strongly protective although Moderna’s is easier to handle since it doesn’t need to be stored at ultra-frozen temperatures.

A second vaccine represents a ray of hope amid despair as the virus continues to spread unabated even before holiday gatherings that are certain to further fuel the outbreak.

The scourge has claimed more than 312,000 U.S. lives and killed 1.7 million people worldwide. New cases in the U.S. are running at over 216,000 per day on average. Deaths per day have hit all-time highs, eclipsing 3,600 on Wednesday.https://interactives.ap.org/embeds/H7wT1/8/

California has emerged as one of the most lethal hot spots, with hospitals running out of intensive care beds and ambulances lining up outside emergency rooms in scenes reminiscent of the calamity around New York City last spring. California on Friday reported over 41,000 new cases and 300 more deaths.

When New York’s hospitals were in crisis, health care workers from across the country came to help out. This time, “there’s no cavalry coming” because so many hospitals are swamped, said Dr. Marc Futernick, an emergency room physician in Los Angeles.

The nation is scrambling to expand vaccinations as rapidly as Moderna and Pfizer can churn out doses. Moderna’s is for people 18 and older, Pfizer’s starts at age 16.

It’s just the beginning of “what we hope will be a big push to get this terrible virus behind us, although it will take many more months to get to all Americans,” Collins said.

Moderna expects to have between 100 million and 125 million doses available globally in the first three months of 2021, with 85-100 million of those available in the U.S.

Even with additional candidates in the pipeline, there won’t be enough for the general population until spring, and shots will be rationed in the meantime. And while health workers are enthusiastically embracing vaccination, authorities worry the public may need more reassurance to ensure more people get in line when it’s their turn.ADVERTISEMENT

“Frankly if we don’t succeed in getting 80% or so of Americans immunized against COVID-19 by the middle of this 2021 year, we have the risk that this epidemic could go on and on and on,” Collins said.

He is especially concerned that accurate information about the shots’ value reaches communities of color, which have been hard-hit by COVID-19 yet also are wary after years of health care disparities and research abuses.

FDA’s decision could help pave the way for other countries that are considering the Moderna vaccine, the first-ever regulatory clearance for the small Cambridge, Massachusetts, company. European regulators could authorize its use as soon as Jan. 6. Britain, Canada and a few other countries already have cleared the Pfizer-BioNTech shot, with a European Union decision due Monday.

“What we want to always remember is one size does not fit all. We want to have options,” said Dr. Paul Duprex of the University of Pittsburgh.

Moderna has about 5.9 million doses ready for shipment set to begin over the weekend, according to Operation Warp Speed, the government’s vaccine development program. Injections of health workers and nursing home residents continue next week, before other essential workers and vulnerable groups are allowed to get in line.

Both Moderna’s and Pfizer-BioNTech’s shots are so-called mRNA vaccines, made with a groundbreaking new technology. They don’t contain any coronavirus – meaning they cannot cause infection. Instead, they use a piece of genetic code that trains the immune system to recognize the spike protein on the surface of the virus, ready to attack if the real thing comes along.

Their development less than a year after the coronavirus first emerged set a speed record, but Collins stressed that shouldn’t worry people. The speed was due to billions in company and government investments paired with years of earlier scientific research, not any cut corners.

“The rigor of the analysis of these vaccines is unprecedented,” Collins said. “We’re not done with this but hope is on the way, and the hope comes from this scientific brain trust that has pulled out all the stops.”

Experts are hoping the two vaccines together will “break the back of the pandemic” when combined with masks and other precautions, said Dr. Arnold Monto of the University of Michigan, who chaired an advisory committee that publicly debated the shots’ evidence ahead of FDA’s decisions.

–Both the new Moderna vaccine and the Pfizer-BioNTech shot require two doses several weeks apart. The second dose must be from the same company as the first.

–In a study of 30,000 volunteers, the Moderna vaccine was more than 94% effective at preventing symptomatic COVID-19 in people 18 and older. It also strongly protected older adults, who are most vulnerable.

–The inoculated can’t throw away their masks as it’s not yet clear either vaccine prevents silent, symptomless virus spread. But there was a hint that Moderna’s shot might provide some protection against asymptomatic infection.

–The Moderna study uncovered no major safety problems. Like with the Pfizer-BioNTech shot, expect sore arms, fever, fatigue and muscle aches, which are signs the immune system is revving up.

–Both vaccines carry “a remote chance” of causing a severe allergic reaction. Moderna’s study turned up none of these, though a handful were reported in Britain as the Pfizer-BioNTech vaccinations got underway and the FDA is looking into five in the U.S., including a severe reaction in Alaska. The vaccines’ ingredients aren’t identical. Still, after any COVID-19 vaccination, people should stick around for 15 minutes – or 30 minutes if they have a history of severe allergies – so if they do have a reaction, it can be treated immediately.

–Both vaccines remain experimental, and the government is closely monitoring safety in case rare problems crop up.

–Additional studies are needed to tell if the vaccine should be used by pregnant women and children. Women who are pregnant or breastfeeding should discuss whether to get the vaccine with their doctor.