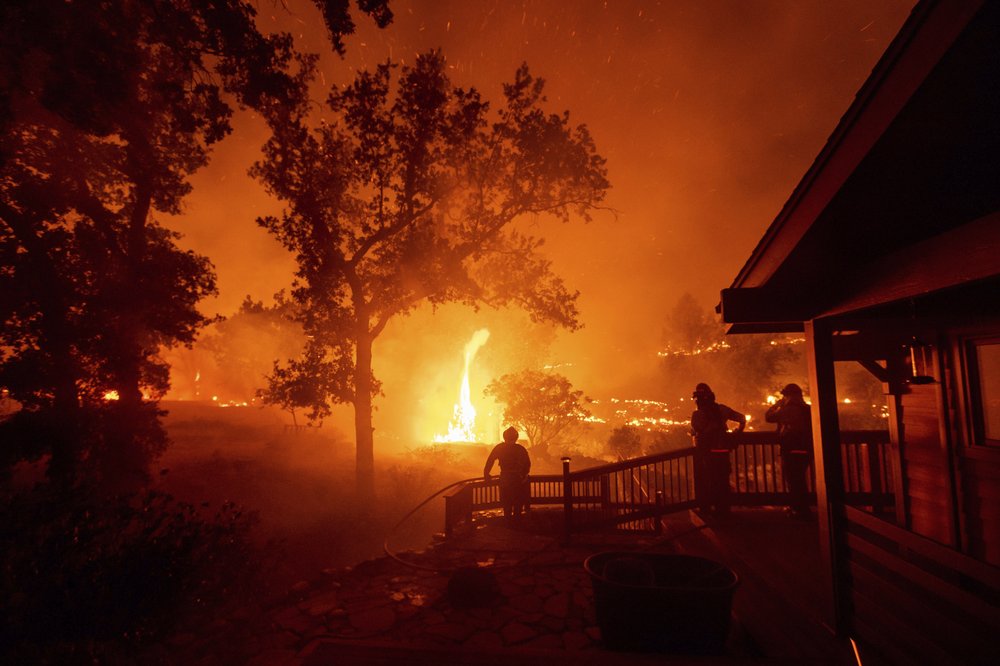 FILE - In this Aug. 21, 2020, file photo, firefighters watch flames from the LNU Lightning Complex fires approach a home in the Berryessa Estates neighborhood of unincorporated Napa County, Calif. The blaze, the fifth largest in California history, forced thousands to flee and destroyed more than 1,000 homes and other structures. This year has seen record Atlantic hurricanes and western wildfires, devastating floods in Asia and Africa and a hot, melting Arctic. It's not just been a disastrous year, but a year of disasters. (AP Photo/Noah Berger, File)

Nature struck relentlessly in 2020 with record-breaking and deadly weather- and climate-related disasters.

With the most named storms in the Atlantic, the largest-ever area of California burned by wildfires, killer floods in Asia and Africa and a hot, melting Arctic, 2020 was more than a disastrous year with the pandemic. It was a year of disasters — and climate change from the burning of coal, oil and natural gas was a big factor, scientists said.

The United States didn’t just set a record for the most disasters costing at least $1 billion — adjusted for inflation — the nation obliterated the record, according to the National Oceanic and Atmospheric Administration.

By September, 2020 had tied the old record of 16 billion-dollar disasters and when the count is completed in early January, officials figure it will be 20, likely more. Only three states weren’t part of a billion-dollar weather disaster (Alaska, Hawaii and North Dakota) — and all the coastline from Texas to Maine, except for a tiny part of Florida, was under a watch or warning for a hurricane, tropical storm or storm surge from those systems in 2020, according to U.S. weather officials.

With 30 named storms, the Atlantic hurricane season surpassed the mark set in 2005, ran out of storm names and went deep into the Greek alphabet, making meteorologists reconsider how they name future storms, officials said. Ten of those storms rapidly intensified, making them more dangerous. A dozen made landfall in the U.S., easily smashing the old record of nine. And Louisiana got hit five times. At one point, the American Red Cross had 60 New Orleans hotels filled with refugees.

With a devastating 20-year megadrought and near-record heat, California had at least 6,528 square miles (16,907 square kilometers) burned by wildfire, doubling the previous record area burned. Five of the six l argest wildfires in California history have been in 2020. Oregon and Colorado had immense fire damage, too. More than 10,000 buildings were damaged or destroyed and at least 41 people killed.

Between fires and hurricanes, the American Red Cross provided a record 1.3 million nights of shelter for disaster-struck Americans — four times the annual average for the previous decade.

“Since April, we’ve seen a large disaster occur somewhere in the country every five days,” said Trevor Riggen, the Red Cross vice president in charge of disasters. “It’s really been a non-stop pace, and not all those disasters make the news.”

It was such a busy and crazy a year that a derecho that savaged the Midwest somehow flew under the radar, despite damage nearing $10 billion, and is barely remembered. Other billion-dollar severe storms, often with tornadoes and hail, struck the U.S. in January, February, twice in March, three times in April and another three times in May.

All these U.S. disasters have “really added up to create a catastrophic year,” said Adam Smith, a NOAA applied climatologist. “Climate change has its fingerprints on many of these different extremes and disasters.”

“Nature is sending us a message. We better hear it,” United Nations Environment Programme Director Inger Andersen told The Associated Press in an interview. “Wherever you go, whatever continent, we see Nature socking it at us. The warmest three-year period we’ve ever seen. The Arctic temperatures, the wildfires, etc. etc.”

Worldwide, more than 220 climate- and weather-related disasters hurt more than 70 million people and caused more than $69 billion in damage. Over 7,500 people were killed, according to preliminary figures from the international disaster database kept at the Centre for Research on the Epidemiology of Disasters at the Catholic University of Louvain in Belgium.

Of the disasters the group tracks, including earthquakes, volcanoes and landslides, 85% to 90% are climate and weather related, said Director Debarati Guha-Sapir.

Unlike the United States, which saw a rare break in 2020 from increasing non-hurricane flooding, worldwide “floods is your biggest problem,” Guha-Sapir said. “It’s a huge mistake to underestimate floods.”

Floods killed more than 1,900 people in India in June and affected 17 million people, according to the center’s data. Other flooding and associated landslides in Nepal, Pakistan, Afghanistan and again in India killed at least another 1,250 people. African floods killed nearly 600 people. And flooding along Y angtze River and the Three Gorges Dam in China killed at least 279 people in the summer and caused economic losses of more than $15 billion, according to the World Meteorological Organization.

Hue, Vietnam had a record 103 inches (261 centimeters) of rain in October, according to the WMO.

Extremes, including heat waves and droughts, hit all over the world. Siberia reached a record 100 degrees (38 degrees Celsius) as much of the Arctic was 9 degrees (5 degrees Celsius) warmer than average and had an exceptionally bad wildfire season. Arctic sea ice shrank to the second lowest level on record and set a few monthly records for melt.

The pace of disasters is noticeably increasing, said disaster experts and climate scientists. The international database in Belgium calculated that from 1980 to 1999, the world had 4,212 disasters affecting 3.25 billion people and costing $1.63 trillion, adjusted for inflation. From 2000 to 2019 those figures jumped to 7,348 disasters, 4.03 billion people affected and $2.97 trillion in damage.

“Disasters are very much becoming a chronic condition in this country,” said Riggen, who has noticed the change since 2006 when he joined the Red Cross after Hurricane Katrina.

“I didn’t expect to see a season with 30 named storms in my lifetime,” Mann said, noting that hurricanes were fueled by a natural La Nina cooling of parts of the central Pacific combined with human-caused warming of water temperatures.