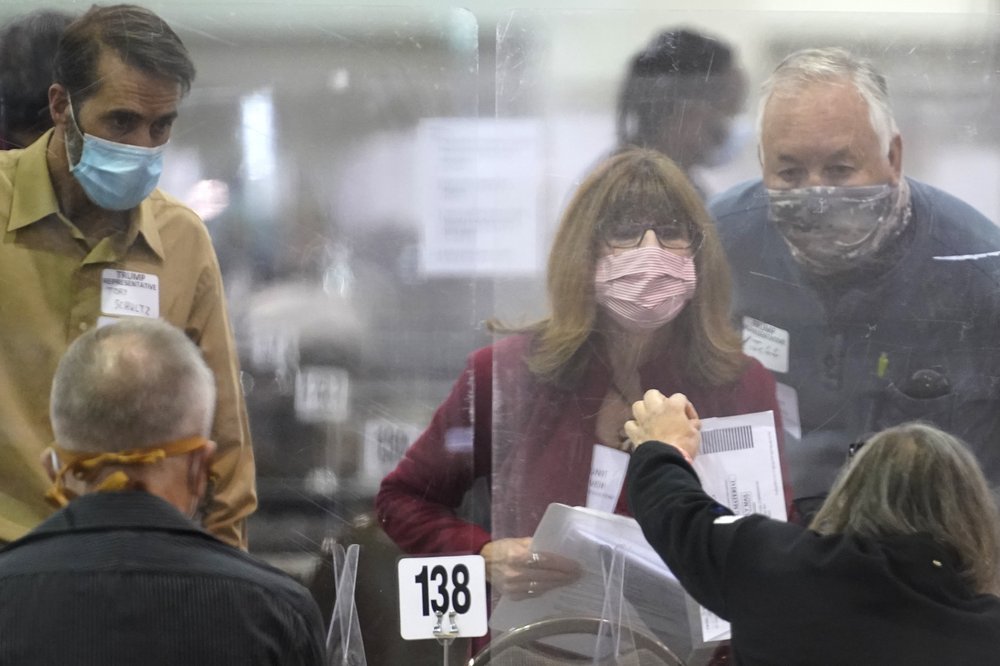 Recount observers check ballots during a Milwaukee hand recount of Presidential votes at the Wisconsin Center, Friday, Nov. 20, 2020, in Milwaukee, Wis. The recount of the presidential election in Wisconsin's two most heavily Democratic counties began Friday with President Donald Trump's campaign seeking to discard tens of thousands of absentee ballots that it alleged should not have been counted. (AP Photo/Nam Y. Huh)

MADISON, Wis. (AP) — The recount of the presidential election in Wisconsin’s two most heavily Democratic counties began Friday with President Donald Trump’s campaign seeking to discard tens of thousands of absentee ballots that it alleged should not have been counted.

Trump’s three objections attempting to discard the ballots were denied by the three-member Dane County Board of Canvassers, twice on bipartisan votes. Dane County Clerk Scott McDonell said he expected the campaign was building a record before filing a lawsuit.

Joe Biden won Wisconsin by 20,600 votes and carried Dane and Milwaukee counties by a 2-to-1 margin. Trump only paid for recounts in those two counties, not in the 70 others, 58 of which he won.

There’s no precedent for a recount overturning a deficit as large as Trump’s in Wisconsin, so his strategy is widely seen as seeking to build a case to take to court.

His team on Friday sought to have ballots discarded where election clerks filled in missing address information on the certification envelope where the ballot is inserted; any absentee ballot where a voter declared themselves to be “indefinitely confined” under the law; and any absentee ballot where there was not a written application on file, including roughly 69,000 that were cast in-person during the two weeks before Election Day.

Trump attorney Christ Troupis argued that certification envelopes filled out by people who voted absentee in-person do not count under the law as a written application, even though the envelope is identified as such. The board of canvassers, controlled 2-1 by Democrats, voted unanimously to reject the complaint.

Troupis also argued that people claimed to be indefinitely confined even though they were not. Such a declaration exempts the voter from having to show a photo ID to cast their ballot, which Troupis called “an open invitation for fraud and abuse.” The Republican-controlled Wisconsin Supreme Court this spring ruled that it is up to individual voters to determine whether they are indefinitely confined, in line with guidance from the bipartisan Wisconsin Elections Commission.

The canvassing board voted 2-1 to count those ballots, with the Republican opposed.

Trump’s attorney also claimed that the law does not allow clerks to fill in missing information on the envelope that goes with absentee ballots. The state elections commission told clerks before the election that they can fill in missing information on the absentee ballot envelopes, a practice that has been in place for at least the past 11 elections.

The canvassing board voted unanimously to count those ballots.

In Milwaukee, the canvassing board agreed to Trump’s request to set aside all absentee ballot envelopes where voters claimed “indefinitely confined” status and those with two different colors of ink, perhaps indicating that someone other than the voter completed the information. Trump also asked to separate absentee ballots with or without written applications and to observe absentee ballot logs that would account for those requested through the state’s myvote.wi.gov website. Unlike in Dane County, Trump’s campaign in Milwaukee initially asked only to review those ballots and others, not to have them discounted.

In both Madison and Milwaukee, the recounts were taking place in large convention centers so workers could be distanced to protect against spreading the coronavirus. Observers were required to wear masks and plexiglass shields were aset up.

Milwaukee County Clerk George Christenson, a Democrat, said it was irresponsible of Trump to force the recount amid the pandemic that is surging in Wisconsin.

“It just shows his lack of empathy toward the American people,” Christenson said.

In Milwaukee, the Rev. Greg Lewis, founding president of groups of faith leaders who sought to bolster Black turnout, said the recount highlights the “oppression, disenfranchisement, downright racism and disrespect” that minority communities in Milwaukee face.

“I almost died and we are running around here counting votes unnecessarily,” said Lewis, who contracted COVID-19 earlier this year. “This is nonsense. This is pitiful. Why do we keep putting up with this? The people have decided, let it be.”

There have been at least 31 recounts in statewide elections in the U.S. since the most famous one in Florida’s presidential election in 2000. The recounts changed the outcome of three races. All three were decided by hundreds of votes, not thousands.