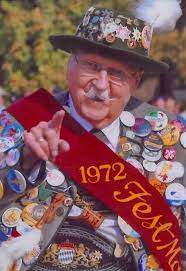 A long-time La Crosse businessman and Oktoberfest supporter has died.

Walt Hammond was 96 when he passed away last weekend at a care center in La Crosse.

Hammond had a long career as a car dealer, working at Kennard Buick for many years before owning Walt Hammond Buick, formerly on the Causeway.

Hammond also set a record as the youngest Festmaster for La Crosse’s Oktoberfest, getting the honor when he was 48 years old in 1972.

In recent years, he was the earliest Festmaster still surviving.

Walt Hammond and his distinctive handlebar mustache were said to be the inspiration for a drawing of an accordion player on one Oktoberfest button.