Packers Struggle To Put Away Jags, Get By For 24-20 Win 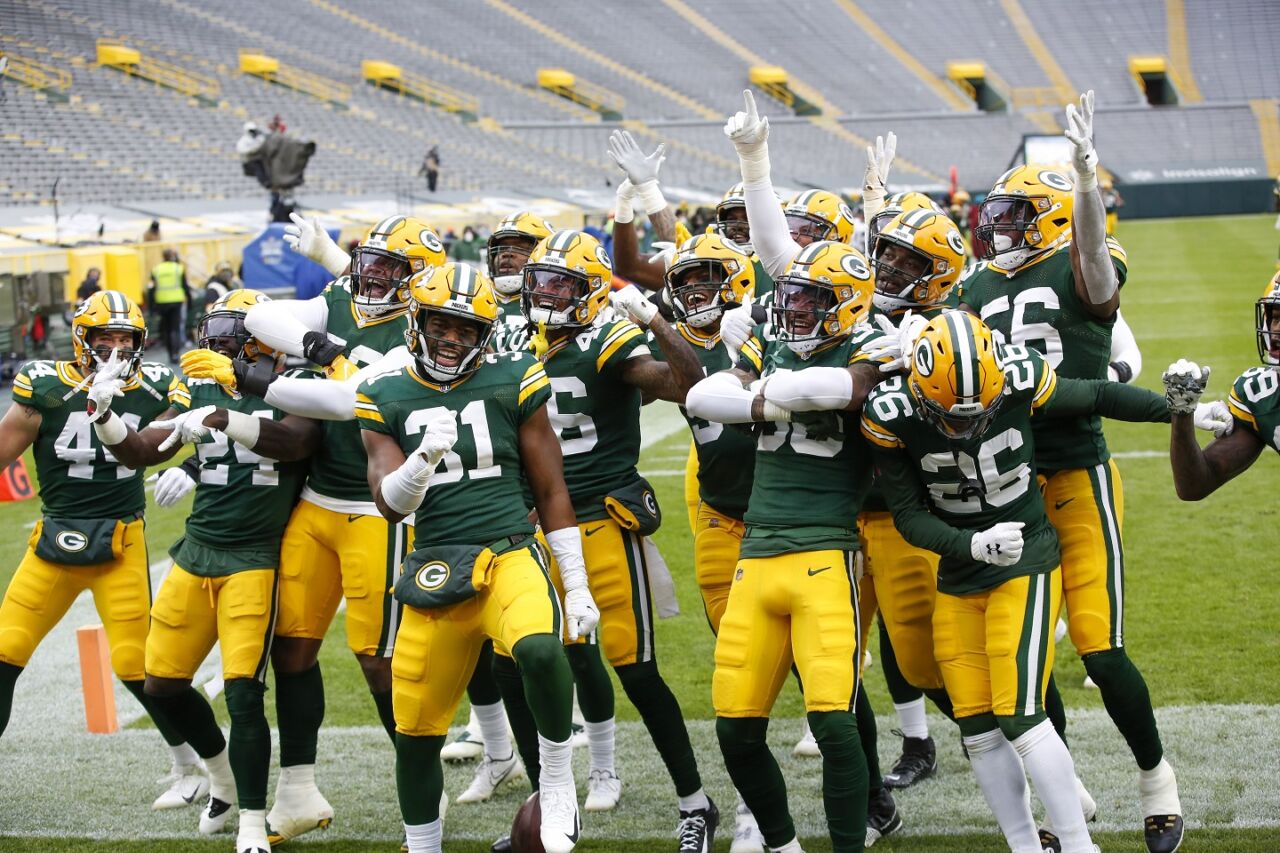 The Green Bay Packers defense celebrates after an interception and touchdown return during the first half of an NFL football game against the Jacksonville Jaguars Sunday, Nov. 15, 2020, in Green Bay, Wis. (AP Photo/Matt Ludtke)

GREEN BAY, Wis. (AP) — Aaron Rodgers threw two touchdown passes and ran for a third score as the Green Bay Packers overcame numerous mistakes to rally for a 24-20 victory over the Jacksonville Jaguars on Sunday.

Rodgers put the Packers (7-2) ahead for good with 9:11 left by throwing a 6-yard TD pass to Davante Adams, who had left with an ankle injury earlier in the second half. Rodgers also had a 5-yard touchdown run and a 78-yard scoring strike to Marquez Valdes-Scantling, who caught four passes for a career-high 149 yards.

Keelan Cole scored on a franchise-record 91-yard punt return and a 12-yard reception for Jacksonville (1-8), which lost its eighth straight. Jacksonville’s James Robinson rushed for 109 yards on 23 carries.

Cole became the first Jaguar ever to score on a punt return and a reception in the same game, as well as the first player from any team ever to accomplish that feat against the Packers.

Jacksonville’s first drive after Adams’ touchdown stalled at midfield, but Jacksonville got the ball back on its 46 with 2:25 left after a 30-yard punt by JK Scott that followed a third-and-1 stop of Aaron Jones.

The Jaguars got as far as Green Bay’s 36, but back-to-back sacks by Rashan Gary and Preston Smith pushed them back to their own side of the field before Jake Luton threw incomplete on fourth-and-26 to seal Jacksonville’s fate.

Green Bay entered the game as a two-touchdown favorite but had enough breakdowns to give Jacksonville hope. The Jaguars rallied from a 17-10 halftime deficit by scoring 10 points off turnovers in the second half.

Jacksonville’s first takeaway came early in the third quarter. CJ Henderson knocked the ball loose from Adams, and Myles Jack returned the fumble 16 yards to Green Bay’s 16. That set up Luton’s 12-yard touchdown pass across the middle to Cole.

Sidney Jones picked off Rodgers late in the third to set up Chase McLaughlin’s go-ahead, 31-yard field goal with 12:44 left in the game.

Penalties proved costly for both teams.

A holding penalty on Green Bay’s Billy Turner wiped out a 22-yard touchdown pass from Rodgers to Adams late in the second quarter, forcing the Packers to settle for Mason Crosby’s 39-yard field goal.