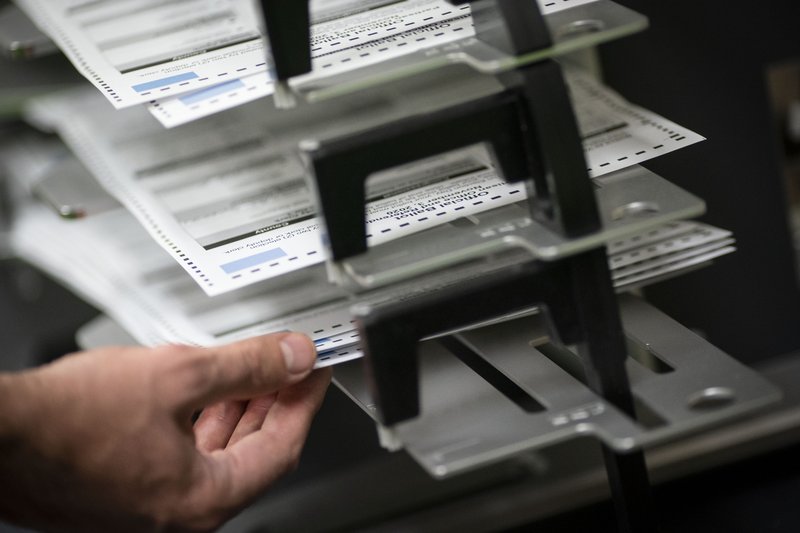 MADISON, Wis. (AP) — Republicans are grasping for ways to reverse Joe Biden’s win in Wisconsin over President Donald Trump, despite there being no evidence of widespread fraud or voting irregularities in the state.

Instead, GOP officials are latching on to minor issues and providing no evidence that any of the problems affected the overall outcome of the election. Instead the effort appears aimed at sowing doubt in the election results among Trump supporters ahead of a possible recount.

Biden won the county by more than 9,500 votes. But near midnight on Election Day, the totals in that county as reported by The Associated Press were reversed to incorrectly show Trump ahead. The AP quickly corrected the error, some 13 hours before the cooperative ultimately called the state for Biden.

Trump’s son, Eric Trump, retweeted an article Monday from the right-wing site The Gateway Pundit about the vote flip. The article falsely claims that Trump won the county and because of it he should only be trailing Biden by about 1,500 votes statewide instead of around 20,500 votes.

“There was a brief technical error in AP’s collection of the vote count in Rock County, Wisconsin, that was quickly corrected,” said AP spokesman Patrick Maks. “AP has myriad checks and redundancies in place to ensure the integrity of the vote count reporting. We are confident in what we have delivered to customers.”

Final results posted on Rock County’s website, which the AP reported on Election Day, show Biden received 46,649 votes in Rock County while Trump received 37,133. Those results are consistent with 2016, when Democrat Hillary Clinton defeated Trump in Rock County by around 7,800 votes.

Overall, Biden beat Trump by more than 20,000 votes in Wisconsi n, a 0.63-percentage-point win that will be difficult to overturn in a recount. Trump gained just 131 votes in a 2016 presidential recount.

There have been no confirmed reports of illegal voting, and the state’s top elections official, Meagan Wolfe, has said repeatedly that there were no problems with the election reported to her office and no complaints filed alleging any irregularities.

But as Wisconsin counties work to certify results of the election, Republicans have sought to sow doubts about the integrity of the election, despite little or no evidence to back up their claims.

Republican Assembly Speaker Robin Vos has ordered an investigation into the election results. One of the lawmakers on the committee that will conduct the probe, Republican Rep. Joe Sanfelippo, said Monday that “If an investigation shows these actions affected the outcome of the election, we need to either declare this past election null and void and hold a new election or require our Electoral College Delegates to correct the injustice with their votes.”

Wisconsin state law gives each political party with a presidential candidate on the ballot the power to pick their electors, and Republicans and Democrats did so last month. The Republican-controlled Legislature has no role in picking the electors.

The electors are bound to cast their vote for the winner of the popular vote as certified by the Wisconsin Elections Commission, an independent agency that runs elections. Its board has an equal number of Democratic and Republican members, but the election results are certified by the chair of the commission, currently a Democrat. The Legislature plays no role in certifying election results. Democratic Gov. Tony Evers has to sign off on who the elections commission certifies as the winner.

Republicans have also raised concerns about clerks filling in the addresses of witnesses on absentee ballot envelopes. State law does not say who must provide the address information. The state elections commission told local election clerks they could add the address of witnesses to the envelopes if they were able to determine what it was.

Another issue relates to a state law requiring voters to have lived at their current address for at least 28 days before they can vote. A previous law had the requirement at just 10 days before an election; the 28-day requirement was restored in June by a federal appeals court.

The elections commission told clerks who had already printed ballots with the 10-day residency requirement that they could write in the correct information. That raised concerns from Republican observers on Election Day.

Also on Monday, Claire Woodall-Vogg, the director of the Milwaukee Election Commission, told the state elections commission about an issue that arose on election night when she delivered 12 flash drives containing the tallies for absentee votes to the county clerk’s office.

Woodall-Vogg said she realized she had left one of the flash drives in a vote-counting machine where absentee ballots were processed. It was never unattended by election staff members and one of them gave it to a police officer who then delivered it to the county clerk’s office.

Woodall-Vogg said that time stamps confirmed the flash drive was not altered and the Milwaukee County district attorney’s office also reviewed the incident to document the chain of custody.