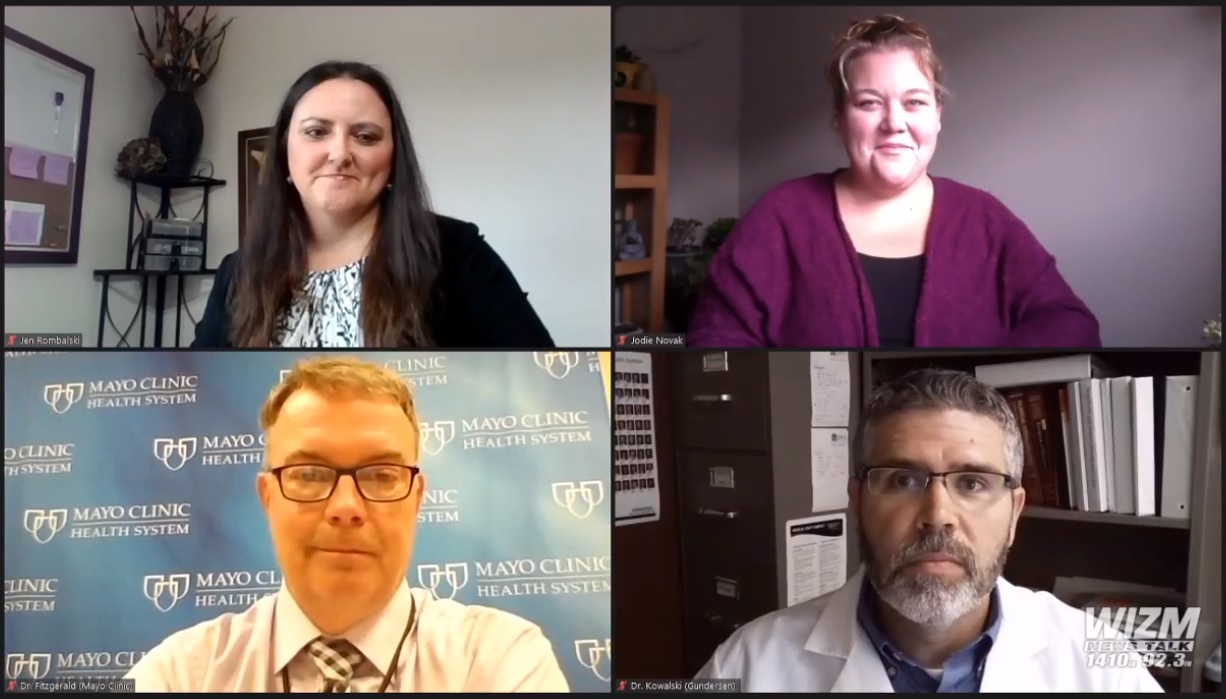 Hospitals in La Crosse County are headed toward reaching capacity when it comes to COVID-19 care.

That was the main message from the Coulee COVID-19 Collaborative panel at a briefing Wednesday.

The collaborative’s dashboard updates each Wednesday, and it showed this week, hospitals’ capacity to provide care for COVID-19 patients in yellow for the first time since it launched. In fact, for the first time, every indicator on the dashboard gauging virus spread in the region was either red or yellow.

“There are many other systems and many other regions that have hit crisis status and we’re headed that direction,” Kowalski said. “So this is really a call out that the decisions we make about what we do and how we do it in the next two weeks, are really going to determine where we are at in a healthcare systems standpoint in the coming weeks.”

An average of 6.1 people per 100,000 are admitted into La Crosse County hospitals per day the past week, according to the dashboard.

Those on the panel Wednesday were also not too thrilled with how Donald Trump rolled into the Coulee Region on Tuesday for a rally in West Salem or the message he had on the virus.

One of the things Trump peddled was that the virus wouldn’t be a thing after the election — suggesting, perhaps, that Joe Biden would win, apparently.

“COVID, you turn on the news, COVID, COVID,” Trump told the crowd of thousands at the La Crosse Fairgrounds Speedway. “You know when they’re going to stop talking about it so much? November 4th, you’re right. November 4th. It’s a whole crazy thing. It’s too complicated to explain.”

La Crosse County Health director Jen Rombalski doesn’t quite see it that way — Trump’s conspiracy theory the pandemic will end somehow the day after the election.

“The data does not support that,” Rombalski said. “It just doesn’t support it. There’s no other way to speak to that comment or that statement that I’ve heard in the past. That is not a reality according to the data that we have.”

When it comes to how the rally was conducted at the Speedway, the collaborative didn’t get into it specifically. They just made reference to the fact that large gatherings simply shouldn’t be happening.

“What we do in the community, our behaviors, affects our health care staff,” said Dr. Kevin Fitzgerald, who practices Family Medicine at Mayo Clinic Health System in Onalaska. “You’re putting those staff at risk.

“I’m married to an ER nurse. She sees people who are sick all day long. So, really, there’s no excuse to be in large gatherings right now, where you can spread this virus around, because you really are putting healthcare providers at risk.”

On the same day Trump was in La Crosse County, the White House Office of Science and Technology Policy sent out a release touting the president’s first-term accomplishments. On the top of that list was “ending the Covid-19 pandemic.”

It stated: “From the outset of the Covid-19 pandemic, the Administration has taken decisive actions to engage scientists and health professionals in academia, industry, and government to understand, treat, and defeat the disease.”

Third on that list of accomplishments for Trump during his first term: “Understanding our planet.”

That list and Trump’s visit to West Salem came the same day Wisconsin was hit hardest by the virus — setting single-day highs for cases (5,262), newly hospitalized (220) and deaths (64).

“The national message, we do continue to hear that we’re turning the corner and that it’s not as bad as it seems,” Rombalski said, referring to the downplaying of the virus — not the policy’s statement that the pandemic is ended. “I would say to that, we look at our local data, we look at our state data, that is not the message that we get from the data.”

Just one more note in that release from the Office of Science and Technology Policy, an advisor was quoted saying, “Over the past four years, President Trump’s policies and investments in science and technology ensure America stands ready to solve today’s most pressing challenges and that our workforce is prepared for tomorrow’s innovations. For years to come, these achievements will guarantee the United States remains the world’s leader in research, discovery and the advancement of industries that will shape our future.”