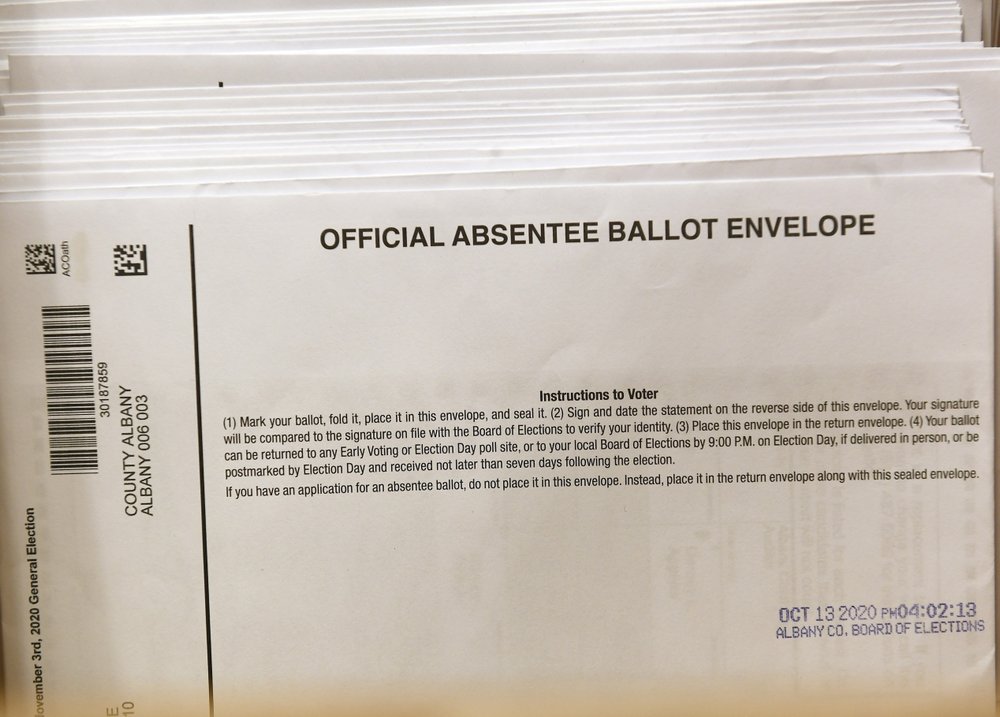 FILE - In this Wednesday, Oct. 14, 2020, file photo are Absentee Ballots at the Albany County Board of Elections building in Albany, N.Y. Seventeen states prohibit counting ballots cast by someone who subsequently died before the election, but 10 states specifically allow it. The law is silent in the rest of the country, according to research by the National Conference of State Legislatures. (AP Photo/Hans Pennink, File)

Seventeen states prohibit counting ballots cast by someone who subsequently dies before the election, but 10 states specifically allow it. The law is silent in the rest of the country, according to research by the National Conference of State Legislatures.

Even though a law might require such ballots to be rejected, it’s likely that some could still count depending on when the person dies and when election officials find out about the death.

“The law may say that the ballot of a person who dies in that situation can’t be counted, but it is a hard law to follow,” said Wendy Underhill, head of elections for the National Conference of State Legislatures.

When someone dies close to an election, it takes time for death records to be updated, and there is a narrow window between when a ballot is cast and counted. Colorado in 2016 had between 15 and 20 instances of voters who cast a ballot by mail and then died before Election Day. All were counted.

In Michigan’s primary earlier this year, 864 ballots were rejected because the voters died before the election even though they were alive when they filled them out.

The president’s son Donald Trump Jr. tweeted a link to a story about the dead voters in Michigan that was later debunked for misrepresenting the issue. With President Trump making unsubstantiated claims of voter fraud, the question of whether ballots will count if early voters die soon after could be a source of further conspiracies.

Studies have shown that voter fraud is exceptionally rare. There are numerous safeguards built into the system to ensure that only voters eligible to vote can do so and that they cast only one ballot. Election officials say that when fraud does happen, people are caught and prosecuted.

“There have been umpteen examples of some group claiming a whole bunch of people casting ballots after they died,” said Justin Levitt, an election law expert who has studied voter fraud in depth. “These things don’t pan out.”

In most cases, claims of dead voters are based on poor information or a faulty analysis that fails to account for the many people who share the same name and birthdate, Levitt said.

In an exceptionally small number of cases, there is fraud. Levitt said this typically involves someone wanting to honor the wishes of a loved one who recently died and either knowingly or not commits a crime by filling out that ballot.

An election judge from southern Illinois was charged in 2016 with voter fraud after she filled out a ballot for her late husband because she said he would have wanted Trump to be president.

In California, it’s an issue of fairness to count ballots cast by people who then die before Election Day, Secretary of State Alex Padilla said. He said it’s just as conceivable that someone who votes early in-person also dies before Election Day, and there is no way to identify and reject that ballot.

“The ‘dead voters’ is used as a false narrative, a pretext for changes in some states to how they register voters or count ballots when the data shows otherwise,” Padilla said.

Wisconsin, which like North Carolina is a presidential battleground this year, is among the states that prohibit a ballot from being counted if the voter dies after submitting it. Every month, the state’s election commission receives records of county death certificates, and those records are run against the statewide voter registration system.

Any potential matches are flagged to the local clerk where the voter is registered, and the clerk is responsible for verifying the match by looking to obituaries and other sources before changing the voter’s status, said Reid Magney, Wisconsin Election Commission spokesman. But that also has its limits.

“There’s no way to check every absentee ballot to make sure the voter hasn’t died since it was issued,” Magney said.

Iowa’s election office also receives death records and processes them as they are received, including on Election Day. If a person dies after requesting or returning an absentee ballot, the ballot is voided and not counted, said Kevin Hall, spokesman for Iowa’s secretary of state.

“Voters have to be eligible electors on Election Day,” Hall said. “Even though Iowa had 29 days of absentee voting, there is still only one Election Day.”