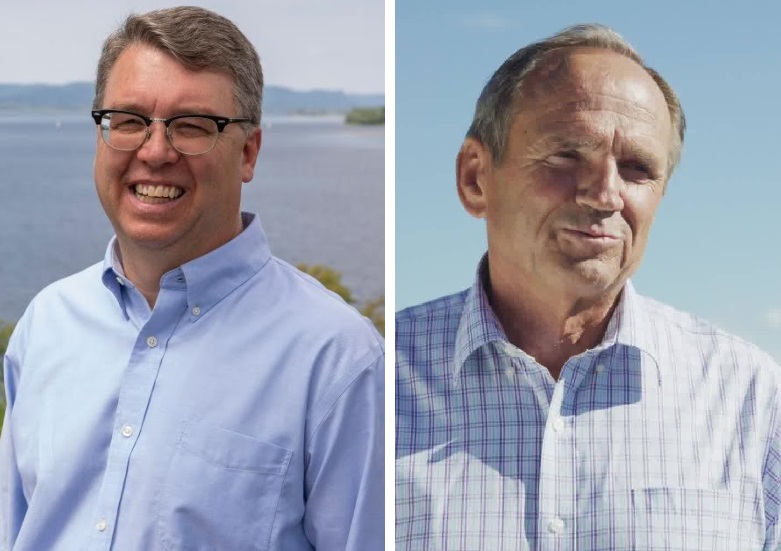 Democrat Brad Pfaff (left) and Republican Dan Kapanke are competing for the 32nd Senate District seat vacated by Jennifer Shilling, who left to become a lobbyist for Dairyland Power.

Republicans head into Election Day with comfortable majorities in both the Senate and Assembly. Their goal is to flip three seats in each house, giving them a two-thirds majority in each chamber and enough votes to override any Evers veto.

That would allow them to rewrite the next state budget with impunity and pass any bill they want. Perhaps most important, the Legislature is due to re-draw district boundaries in 2021 to reflect population changes. Without Evers to block them, Republicans would be able to reconfigure the maps to help maintain their majorities for the next decade.

Evers announced a “Save the Veto” campaign earlier this year. A tally of campaign finance reports from the first half of the year by government watchdog group Wisconsin Democracy Campaign found the state Democratic Party raised $11.5 million compared to the state GOP’s nearly $1.4 million. The Democrats’ top two donors: Illinois Gov. J.B. Pritzker with $2.5 million and California physician and philanthropist Karla Jurvetson with $2.3 million.

An Associated Press review of campaign finance reports through August shows the party has funneled $1.8 million to its candidates in the six key races Republicans need to win. The Democrats’ Senate and Assembly campaign committees have given them another $284,000.

“We haven’t seen spending of this magnitude in Wisconsin,” said Matthew Rothschild, executive director of the Wisconsin Democracy Campaign.

The state GOP’s Senate and Assembly campaign committees have devoted only about $25,000 to back their six candidates. The committees have plenty of money on hand — according to the WDC, the Committee to Elect A Republican Senate had $1.5 million and the Republican Assembly Campaign Committee had $2.4 million.

State GOP Executive Director Mark Jefferson said the party is biding its time as Nov. 3 approaches and the Democratic candidates’ bank accounts show the party is worried about losing the six seats.

“We’re able to move pretty fast when we need to,” Jefferson said. “We’ve dealt with big money from the Democrats before.”

But faced with the Democrats’ money advantage, Assembly Speaker Robin Vos has said supermajorities are out of reach.

“I don’t think it’s likely only because of the environment that we are in,” Vos said during a recent Wispolitics.com forum. “Democrats are trying to buy the election in this cycle. I hear all this money talk, where Democrats decry the fact that money isn’t politics until it really benefits their own side. Democrats derided that when it was against them but now that it’s on their side they’re deathly silent.”

Assembly Democratic Minority Leader Gordon Hintz said President Donald Trump’s mishandling of the pandemic and the save the veto push have led to the financial support.

“It’s about the next decade in Wisconsin,” Hintz said during the forum. “There was real motivation and there are individuals out there that care enough about Wisconsin and the direction of it to get involved.”

Here’s a look at the key races and funding surrounding them:

This race for an open seat representing the La Crosse region in western Wisconsin is one of the most intriguing. On the Democratic side is Brad Pfaff, who’s looking for payback after Senate Republicans removed him from his job as state agriculture secretary last year. Opposing him is Republican Dan Kapanke. The two are old rivals: Kapanke defeated Pfaff to win the seat in 2005. Kapanke lost the post in a 2011 recall spurred by his support for then-Gov. Scott Walker’s public union restrictions. He ran again in 2016 but lost to Democrat Jennifer Shilling, who decided not to seek re-election.

Democrat Jonathan Hansen and Republican Eric Wimberger are facing off for this open seat representing the Green Bay area. Hansen had raised $553,000 through August, with $447,800 coming from the state party. Wimberger had raised about $25,000, including $2,000 from CERS. The state GOP had given him nothing. Hansen’s uncle, Democrat Dave Hansen, held the seat for 20 years before deciding not to run again this fall. The district has leaned conservative for years.

This seat represents a traditionally conservative swath of northwestern Wisconsin along the Minnesota border. Democrat Patty Schachtner captured the district in a 2018 special election but Republican state Rep. Rob Stafsholt is looking to take it back. Schachtner had raised a little more than $216,000, including $88,500 from the state party, as of Aug. 31. Stafsholt collected $109,600, with about $1,100 coming from CERS. The state GOP had given him nothing.

Republicans have targeted Democratic incumbent Robyn Vining after she won the seat by less than a percentage point in 2018. But Vining has outraised GOP challenger Bonnie Lee, amassing $205,400 — with nearly $60,000 coming from the state party — to Lee’s $118,600. Lee hadn’t received any contributions from the state GOP or the Republican Assembly Campaign Committee as of Aug. 31.

Incumbent Democrat Beth Meyers faces Republican James Bolen in this district along the shores of Lake Superior in far northern Wisconsin. Meyers had raised $473,300, with most it, $308,000, coming from the state party. Bolen had raised just $9,675, with $2,435 from RACC and nothing from the state GOP.

In another battle in La Crosse, incumbent Democrat Steve Doyle is trying to fend off Republican Kevin Hoyer and Independent LeRoy Brown. Doyle had a huge fundraising edge as of the end of August, raising nearly $400,000 to Hoyer’s $34,700. Doyle got $167,000 from the state party and $150,000 from the Assembly Democratic Campaign Committee. Hoyer got $3,000 from RACC and nothing from the state GOP.