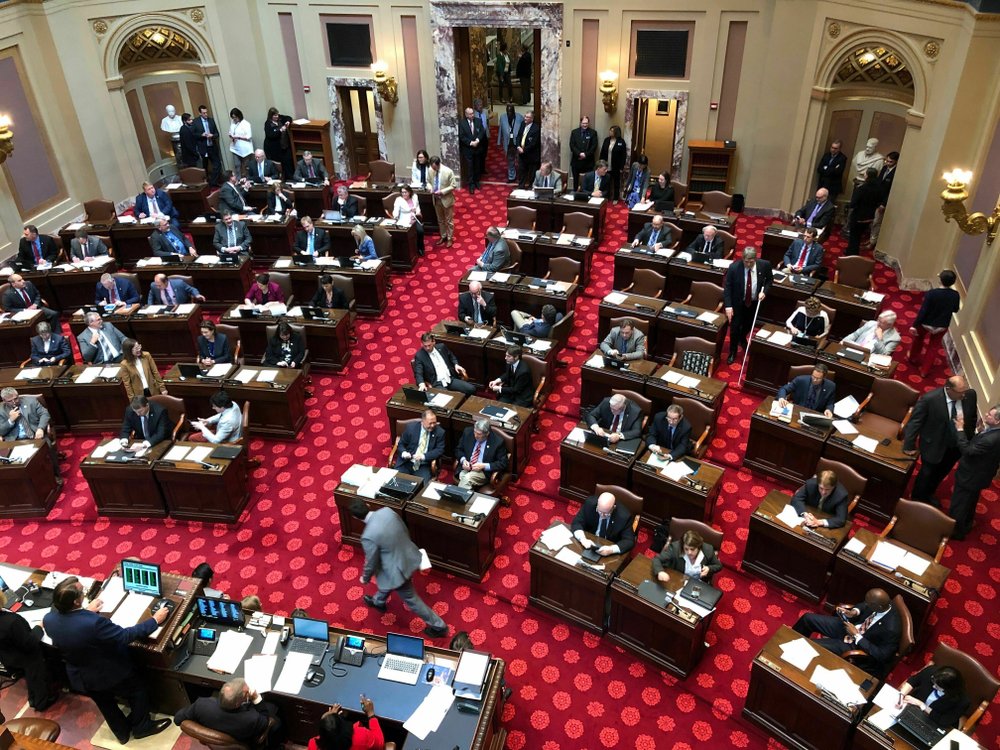 FILE - In this May 17, 2019, file photo, the Minnesota Senate discusses routine bills in St. Paul, Minn. Karnowski. The winners of more than 5,000 state legislative races around the country will have a role in redrawing districts for Congress after the 2020 census. (AP Photo/Steve Karnowski, File)

MINNEAPOLIS (AP) — In an election that will determine political control of the Minnesota Legislature, Democrats have high hopes for flipping the Republican-controlled state Senate in November.

While Democrats are expected to keep a comfortable majority in the House, Republicans have a narrow 35-32 majority in the state Senate — an opportunity, Democrats say, to gain control of both chambers. Both parties have targeted suburban races as key.

Minnesota is the only state in the country to have a split legislature with one branch Democratic and the other Republican.

Minnesota last had a unified government in the 2013-2014 legislative session when Democrats held both chambers and the governor’s office. The upcoming election, with every legislative seat is on the ballot, will determine how the state will grapple with the fallout of the pandemic, which includes a projected $4.7 billion budget deficit.

Who controls the redistricting process, in which state and congressional district maps are redrawn every 10 years based on the census, is also at stake and will affect the balance of power in the state for years to come.

Democrats have identified about a dozen mostly suburban seats held by GOP incumbents that they’ve deemed vulnerable. In the Minneapolis suburbs, Sen. Paul Anderson of Plymouth is not running for re-election in a district that Hillary Clinton carried by 18 points in 2016. Sens. Roger Chamberlain of Lino Lakes and Warren Limmer of Maple Grove, are also potential Democratic targets.

Other suburban GOP incumbents targeted by Democrats include Sen. Dan Hall in Burnsville and Sen. Karin Housley in Stillwater.

Democrats are also targeting some seats outside the metro area, including two seats in Rochester held by Republican Sens. Dave Senjem and Carla Nelson. Nelson faces a challenger in Aleta Borrud, a retired physician who worked at the Mayo Clinic, which is located within the district.

North of the metro area, Sen. Jerry Relph in St. Cloud is running against Aric Putnam, a teacher in the district for 17 years. Freshman Republican Justin Eichorn of Grand Rapids faces a challenge from Bemidji Mayor Rita Albrecht for a seat that, before Eichorn, had been held by Democrats since the 1970s.

Democratic-Farmer-Labor Party Chairman Ken Martin said population growth driven by immigrants in places like Olmsted County and in the St. Cloud area has opened the door for his party to gain ground outside of the metro area.

Senate Republicans, meanwhile, hope to widen their majority by targeting potentially vulnerable Democratic incumbents in districts carried by President Donald Trump in 2016. Senate Minority Leader Susan Kent of Woodbury is being challenged by a former mayor of the St. Paul suburb, Mary Giuliani Stephens; Sen. Matt Little from Lakeville is up against local school board chairman Zach Duckworth; and Sen. Dan Sparks in the southern Minnesota city of Austin faces Gene Dornink.

While both caucuses have highlighted the aftermath of the pandemic as a top priority next legislative session, the GOP’s platform focuses on public safety and law and order. A Senate GOP report last week blamed Gov. Tim Walz and Minneapolis Mayor Jacob Frey for letting riots escalate following George Floyd’s death. Senate Majority Leader Paul Gazelka said it’s an issue that resonates with rural voters as well as voters in Minneapolis and St. Paul and their suburbs.

Democrats call the GOP’s messaging on law and order “extreme” and an attempt to distract from the pandemic.

“This is something that has been dredged up to wedge people and to divide people, and I think it is really not working because people see it for what it is,” Kent said. “They understand that the real crisis that we’re facing is a virus that is killing thousands of Americans and Minnesotans and affecting people’s lives.”

Senate Democrats are focusing their messaging on the accessibility and affordability of health care, which Kent said has been worsened by the pandemic. Other key issues for Democratic candidates include racial justice, rebuilding Minneapolis and St. Paul businesses damaged in the unrest, climate change and affordable child care.

The very method of campaigning has been different for the parties, too, with Republicans door-knocking, opening campaign offices and engaging voters in person. The Democratic caucus shifted from in-person campaigning to virtual town halls, the use of digital apps, and phone and text messaging to mitigate the spread of the coronavirus.

Martin said he was worried the party would be at a disadvantage to Republicans when he decided to cancel traditional campaigning, but he said virtual campaigning hasn’t affected voter engagement.

“If anything we’ve seen an increase in the number of voters we’ve been able to mobilize at this point and so I’m not overly concerned about the fact that we’re campaigning differently,” he said. “My chief priority remains to continue to keep our staff and volunteers and the voting public safe while we campaign.”