Talking about those (bleeping) "ladybugs" with Viterbo's Ted Wilson 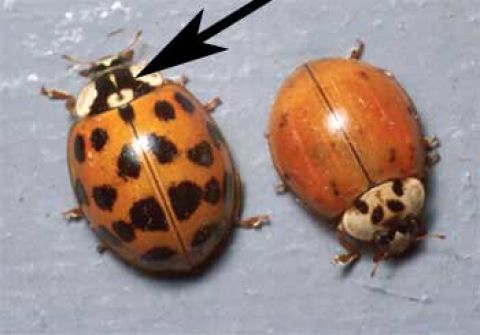 They stink. They bite. If you crush them, they stink worse, and stain whatever you crushed them on.

Great, so they’re shooting armpit stink on you as some kind of ladybug superpower.

The unofficial name: (Bleeping) “ladybug!” followed by a flick of the finger sending them into the air, only to watch them spread their tiny wings on that fat body to fly right back onto your shirt.

Wilson said the bugs were brought from Asia to help soybean farmers control another accidental pest that made it to the U.S. — the soybean aphid.

Today, we have all kinds of chemicals to throw on our food, so was it so smart to bring over these fat stinky “ladybugs” that end up in a cluster in our basement?

“I don’t know if we would turn back the clock and change that decision, but it’s a done deal now,” Wilson said.

Yes Ted. Yes we would. It’s good to eat pesticides.

Asked if there are any male lady beetles, Wilson just laughed, and thought they got their name from First Lady Claudia Alta “Lady Bird” Johnson, the wife of Lyndon Johnson.

Wikipedia says, “During her infancy, her nursemaid said that she was as ‘purty as a ladybird.’

“Opinions differ about whether the name refers to a bird or a ladybird beetle, the latter of which is commonly referred to as a ‘ladybug’ in North America.”

Lady Bird Johnson was born in 1912. The multicolored Asian lady beetle was introduced into the U.S. in 1916. So, we’ll give her a pass on being named after the cute red ladybugs, and not these orange monstrosities.

Friday morning was supposed to be the La Crosse area’s first freeze. Wilson said a lot of the beetles will die, but of course all the rest will end up in your house.

Wilson wasn’t keen to the idea of genetically modifying the bugs so they could withstand winter and not need shelter, because they’d probably still come in the house.

The one piece of good news — aside from the whole soybean pest eater thing — is the bugs don’t really ruin your home once inside. They ruin your life, but not your home.

“They pretty much go into what’s called a diapause, which is a resting state,” Wilson said. “They’re not really eating or doing anything over the winter.”

In Asia, they apparently went to cliff sides to wait out the season there. Here, “It has adapted to trying to find caves, which we call our homes, to get out of the cold weather,” Wilson added.

Bringing them over to help the farmers, it appears like scientists either weren’t listened to — imagine that — or didn’t do their homework on the bugs’ other activities, beyond eating aphids.

“We didn’t realize that this behavior of getting into homes was going to be such a problem as it is,” Wilson said.

Beyond all the annoyances with the beetles, Wilson said they’re also harming their cousins.

“That’s one of the big risks,” Wilson said. “Whenever we bring another species over the pond, as they say. We want them to do a specific thing. We want it to control a very damaging pest and we hope that’s the only thing it does. But there are other side effects.

“We are also finding that it is out, competing with our native lady beetles. It’s kind of given lady beetles a bad name.”

Perhaps the next step is to bring over some organism from Russia to eat up all the lady beetles. But just the stinky ones. What could go wrong?