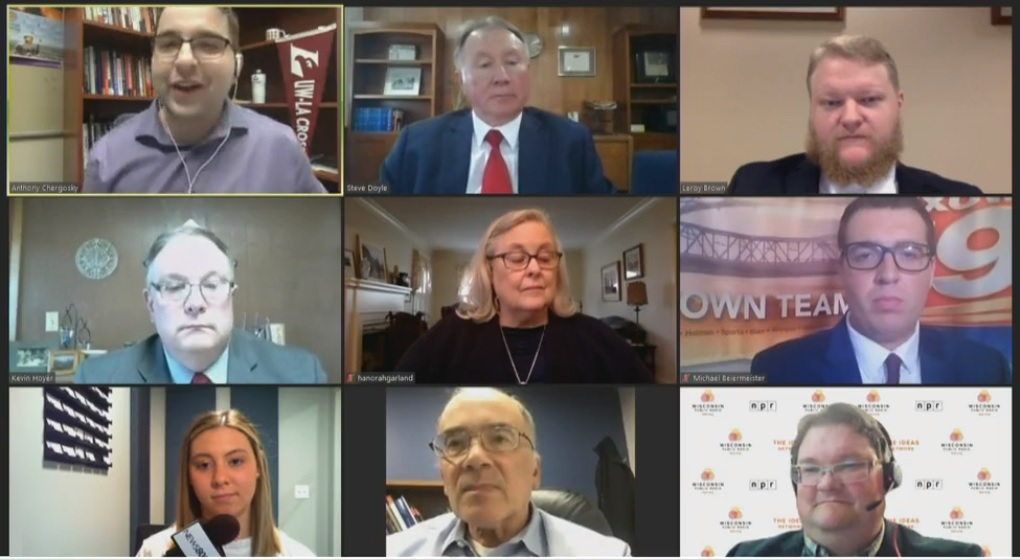 The second debate this week for a Wisconsin Assembly seat hit on everything from fixing the roads to amplifying minority voices to, of course, COVID-19.

Democratic incumbent Steve Doyle, who has represented the 94th Assembly District since 2011, debated with Republican challenger Kevin Hoyer and Independent LeRoy Brown for an hour Wednesday.

At times the debate got somewhat heated — without interruptions to one-another’s answers — on some issues, such as road funding and past La Crosse County Board policies, between Doyle and Hoyer. But candidates did not stray much from answering the questions asked by local media panelists.

On that issue of partisan gridlock, after Doyle and Hoyer answered — somewhat attacking one-another — Brown may have had the best line of the debate.

“It’s interesting to hear, when my competitors in this race will describe their nonpartisan background in such a partisan framework,” Brown said. “I ran independent, because I couldn’t, in good conscience, tie myself to either one of the two (parties), right now.”

Aside from the few jabs at one another, perhaps the most awkward part of the debate was Hoyer, pausing somewhat awkwardly a couple times before answering questions to tell everyone that he was drinking water from his well.

One of the main topics of the first two debates has been the GOP-led state legislature actually meeting in session, which hasn’t happened since mid-April — minus a 30-second “session” to ignore policing bills.

“I’m ready to go back tomorrow,” Doyle said. “I’m getting paid for a job that I want to do. I’ve repeatedly called upon our legislative leadership to get us back into session, so that we can be at the table with the governor and start to work on problems that are facing our state and come up with some bipartisan solutions.”

Brown agreed, the state legislature needs to do something. He said it’s “shameful” and an “abdication of their responsibility” to Wisconsin residents.

“If I were on the legislature, I would be pushing hard to get us into session,” Brown said. “To go over bills. At least have that debate.

“And show people that we are concerned for their wellbeing — again both in terms of health and finances, instead of just shouting out when something happens that we don’t like, actually come up with things that might help me people out.”

On the topic of road funding, Hoyer brought up Gov. Tony Evers reallocation of around $15 million in funding for grant proposal distribution of repairs. Hoyer said that all went to mass transit projects in Madison and Milwaukee and he blamed Doyle for backing Evers.

“I don’t get it,” Hoyer said. “Years ago it was all the legislature’s fault for not giving us money. Now when the legislature gives us money, our governor takes it away, and our representative backs the governor on this.”

Hoyer, later in the debate, also said he was not one to play politics.

“Nonpartisan is all I’ve ever been, working across party lines to make sure that those I represent have their voices heard in Madison and not the other way around,” Hoyer said.

Doyle did push back on Hoyer’s claim of backing Evers distributing some road funds that went to mass transit projects.

“I don’t agree with the governor’s decision to send the money to mass transit,” Doyle said. “And I have been working with the Wisconsin Counties Association and others, also the (Wisconsin) Town’s Association, as an attorney for one of our towns here in La Crosse County, to try to rectify that problem.”

Below is a list of the topics that were discussed. Watch the debate by clicking here.
— Wisconsin legislature hasn’t met since April.
— State’s response to violence.
— Access to affordable insurance coverage
— Road funding from state
— Order limiting capacity and what to do with struggling businesses.
— Gerrymandering
— Schools virtual learning
— Ending partisan gridlock
— Unemployment system
— Biggest ag issue for farmers
— Amplify minority voices
— Other issues:
– Safe drinking groundwater, support of law enforcement (Hoyer)
– Meet in session relating to pandemic (Doyle)
– Help families, business during pandemic and, after, invest in education and healthcare (Brown)