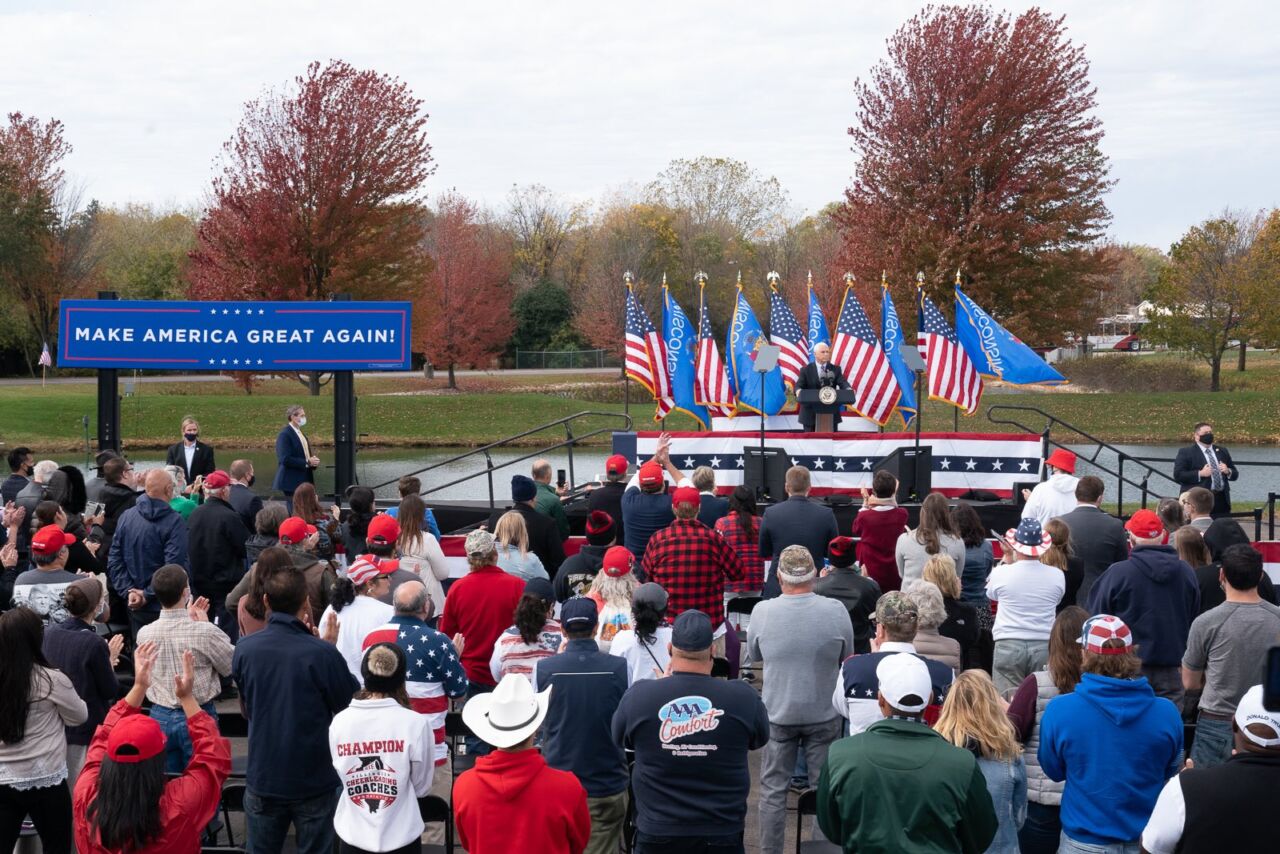 MADISON, Wis. (AP) — Vice President Mike Pence defended President Donald Trump’s nominee for the U.S. Supreme Court and his response to the coronavirus pandemic at an outdoor rally Tuesday in a conservative Milwaukee suburb before a crowd of supporters, most of whom were not wearing masks or socially distancing even as COVID-19 cases spike in Wisconsin.

The rally at Weldall Manufacturing in Waukesha came exactly three weeks before the election and as the Senate Judiciary Committee held confirmation hearings for Amy Coney Barrett, Trump’s pick to replace the late Ruth Bader Ginsburg on the Supreme Court.

Pence said Democrat Joe Biden would “pack the court” if he is elected president by adding seats to the Supreme Court. Biden has avoided questions for weeks about the idea that’s been pushed by liberals and used by Republicans against him. On Monday, Biden said in Cincinnati that he was “not a fan” of adding seats but did not want to get distracted by the issue.

Pressure on Biden to respond intensified after his running mate, California Sen. Kamala Harris, refused to answer the question during her debate with Pence last week.

Pence also promised to eradicate what he called the “China virus,” a description Trump has also repeatedly used when referring to the coronavirus, which was first detected in Wuhan, China, before it spread across the world.

Biden campaign spokeswoman Kate Bedingfield, ahead of Pence’s visit to Wisconsin, faulted him for not doing more to control the pandemic in role as head of the White House Coronavirus Task Force.

“President Trump has shown a reckless disregard for the lives and livelihood of the American people — and nowhere is that more clear than in Wisconsin,” Bedingfield said. “As coronavirus infections, hospitalizations, and deaths surge across the state, the Trump Administration still doesn’t have a plan to beat the virus.”

Cases of COVID-19 have surged in Wisconsin in recent weeks, ranking the state among the top five for new cases per-capita. The number of hospitalizations for COVID-19 hit a record high of 950 on Monday, the state announced plans last week to open a field hospital to handle overflow patients and Democratic Gov. Tony Evers imposed new capacity limits for indoors.

Republicans in Wisconsin are suing to overturn the state’s mask mandate issued by Evers and GOP lawmakers are also working to undo the capacity limits.

Pence was the highest profile of Trump surrogates who were in battleground Wisconsin this week. His son Eric Trump was in the state on Monday and his daughter Ivanka Trump also campaigned in Wisconsin on Tuesday.

Trump was scheduled to be in Janesville on Saturday for a fundraiser. His campaign has not said whether there will be any public events. Trump resumed campaigning on Monday after being quarantined at the White House following his positive test for the coronavirus.

Few states are as important to the president’s prospects as Wisconsin, which Trump carried by less than 23,000 votes out of nearly 3 million cast in 2016. Wisconsin had not voted for a Republican for president in more than a generation before that.