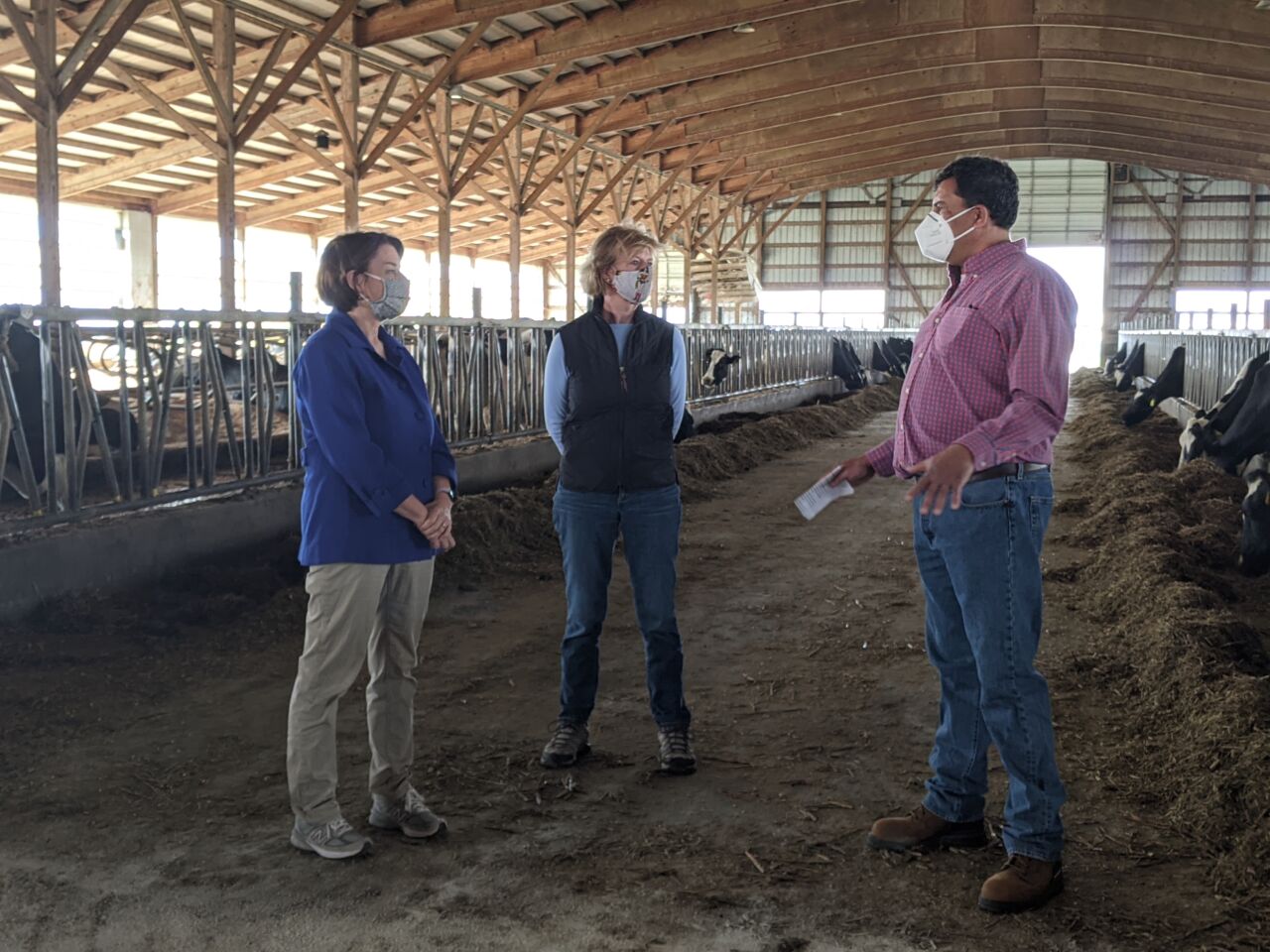 Tim Servais and his wife, Lisa, have been dairy farming on Hamburg Hills Farms since 1974.

“We’ve not missed a day since then, and we’ve grown,” Tim said.

He’s the second generation on the farm that has a third-generation coming in full swing with his oldest son, Zachary, back on the farm after graduating from UW-Madison this spring. Their daughter, Sabrina, is currently at school in Madison, and Jackson is a senior at Central High School.

Looking at his children’s future on the farm, Tim said trade has been a key concern.

“Creating these trade wars takes away from a lot of relationships and hard work that we built with other countries,” Tim said. “It takes us back so far, and I’m hoping Vice President Joe Biden can fix this and get these relationships built back up again.”

He also addressed health care as a common issue in agriculture as most farmers pay for their own insurance as small businesses.

“Everybody has to vote,” Tim said. “This is a very crucial time in this country. We have to bring back to who we are. We are one nation under the flag. We have to be as one together.”

“County and local governments which don’t have the tax base that more urban areas have are finding themselves under enormous strain as they work to continue essential services,” Baldwin said. “Farmers who have seen record rates of bankruptcy under Donald Trump’s chaotic trade wars are struggling in many cases to stay afloat, and parents are trying to balance work, child care, and they’re struggling to help their children with distance learning without reliable access to broadband internet.”

According to Baldwin, Biden would begin revitalizing rural communities with new trade policies. She also said he will partner with rural communities to help them capitalize and compete for federal resources. She was also hopeful for Biden’s plan to protect and build the affordable care act and offer a new public option like Medicare with eligibility lowered to 60-years-old.

“These steps will put money back in the pockets of Wisconsin’s working families,” Baldwin said.

When Minnesota Senator Amy Klobuchar took the stage, she mentioned her ancestral connection to Wisconsin’s dairy industry. Her grandmother was a Swiss immigrant who worked as a cheesemaker in Monroe, Wis. She said since that time, many dairy farming families like the one she came from left the business.

“Farm bankruptcies were up by 25 percent in 2019 with Wisconsin sadly seeing more than any other state losing 800 dairy farms just last year,” Klobuchar said. “The president’s tax bill amounted to a heap of manure for our farmers, it didn’t lower taxes for farmers as he promised. In fact, it raised taxes for the poorest 20 percent of family farmers.”

She referenced the ripple effect COVID-19 had on the farming economy as foodservice chains were disrupted.

“Back in April, dairy farmers were forced to pour out an estimated 3.7 million gallons of fresh milk a day,” Klobuchar said. “It didn’t have to be this way.”

Klobuchar said Biden had a plan to protect family farms from threats posed by corporate consolidation as well as a plan to invest in rural infrastructure from broadband to roads and bridges.

“Wisconsin is your country, and it is time to vote,” Klobuchar said in a final push to garner support for the Biden-Harris campaign.