What are you dressed as? What, a college debater? Halloween, 45 years ago 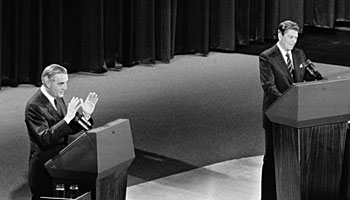 In October of 1984, a Republican president who had been a TV personality in the past was running for a second term, and faced off in debates with the Democrat who had been vice president just four years earlier.  Sound familiar?  Ronald Reagan was the president, Walter Mondale was the former veep.  For their first of two televised debates, La Crosse college students gathered at Mike’s Old Style Inn to watch.  U-W-L professor Joe Heim was there to see the debate along with his students.  The class was closely divided over which man had a better performance.  Among the nearly 40 students in Heim’s class, Reagan was preferred by a single vote.  Just days before that debate, Mondale’s wife Joan campaigned in La Crosse, speaking to an audience at Wittich Hall on the university campus.

Wisconsin still didn’t have much legalized gambling in ’84, outside of bingo.  But a Milwaukee Journal poll showed heavy support for starting a statewide lottery.  That wouldn’t happen until 1988.  Second-most popular type of gambling in the survey was horse racing, then dog racing, and in fourth place, casinos.

At the movies, you could see Sally Field in “Places in the Heart,” “Purple Rain,” starring Prince, or the comedy “All of Me,” with Steve Martin and Lily Tomlin.  And the Chicago Cubs came within one win of reaching the World Series for the first time in almost 40 years.  The Padres beat Chicago to face Detroit in the Series, in 1984, yesterday in La Crosse.