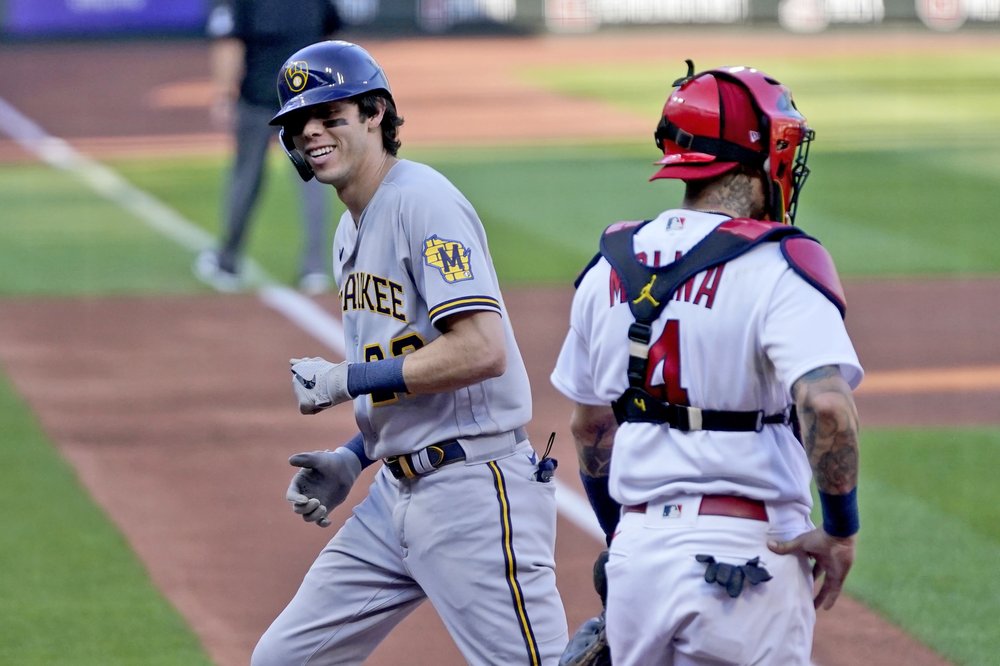 In the opener, Christian Yelich homered and Brent Suter combined with Devin Williams and Josh Hader on a five-hitter for the Brewers in a 3-0 win.

Both teams are among five NL clubs still vying for two open postseason spots. Milwaukee is two games behind St. Louis, and the Cardinals are percentage points behind Cincinnati for second place in the NL Central. The Reds clinched a playoff berth later Friday.

The top two teams in each division advance to the playoffs. The Brewers, Cardinals and Reds are also in contention for the two NL wild cards up for grabs as they finish the season with this five-game series.

“I would have liked to have swept the doubleheader for sure,” St. Louis manager Mike Shildt said. “It was a good baseball game in the first game and we handled our business in the second game.”

Ponce de Leon (1-3) faced one over the minimum, surrendering a walk to No. 9 hitter Jacob Nottingham in the third, before Orlando Arica hit his fifth homer of the season to straightaway center. Ponce de Leon surrendered his second walk with two outs before finishing his outing by getting Ryon Healy to fly to right field.

Ponce de Leon struck out six as he earned his first Major League win in 20 starts.

“Nobody ever thinks they’re never going to get a win,” said Ponce de Leon, who is in his third season with the Cardinals. “There’s nothing you can do. You win some, you lose some. Or you lose a lot in a row.

Dylan Carlson and Matt Wieters each drove in two to back him.

Josh Lindblom (2-4) has lost four of his past five decisions. He allowed three runs and four hits in 2 1/3 innings. He also struck out two and walked one.

The Cardinals broke it open in the fifth, sending 10 batters to the plate. Kolten Wong led off with a single and scored on Edman’s fifth homer of the season, a shot to right field. Carlson doubled to score two and two more came in on Wieters’ single.

St. Louis took a 3-0 lead in the second on a wild pitch that brought in Paul De Jong and an RBI triple from Wong. Edman scored on Matt Carpenter’s double in the first.

“Coming out hot with the bats, especially after our performance in Game 1, was huge for us,” Edman said. “We just built on that momentum throughout the game, and Ponce was great for us.”

In the opener, Yelich’s 12th home run of the season in the third gave Milwaukee a 3-0 lead. It came three pitches after Cardinals starter Jack Flaherty (4-3) crumpled to the ground during his delivery of an 0-2 pitch. Flaherty sat for about a minute, sometimes grimacing in pain, before resuming.

He lasted five innings, giving up three runs on five hits. He also struck out five and walked four.

Suter pitched two-hit ball over four innings, Williams (2-0) solidified his Rookie of the Year resume with two tidy innings and Hader came on for his 12th save in 14 tries.

The left-handed Suter struck out four and walked one in his longest outing of the year.

“It was a big win. We need a couple more this weekend to stay alive,” he said.

The Brewers scored twice in the second. Eric Sogard’s single scored Daniel Vogelbach, and Keston Hiura came in on Arcia’s groundout to third.

The Brewers were slated to serve as the home team in the opener of the doubleheader but instead did so in the nightcap.

Brewers: RHP Corbin Burnes was placed on the 10-day injury list with a left oblique strain. He left Thursday’s game after pitching 3 2/3 innings during which he gave up three runs and six hits in a 4-2 loss to St. Louis. INF Healy was recalled from the Brewers alternate training site to take the roster spot.

Cardinals: RHP John Gant faced one batter in relief of Flaherty, throwing five pitches and giving up a single to Hiura, before leaving with right groin tightness. St. Louis placed him on the 10-Day Injured List after the game and recalled RHP Nabil Crismatt.

Brewers: RHP Brandon Woodruff (2-5, 3.43) is going after his first win since Aug. 25. He is 0-3 in his past five starts, including dropping a 4-2 decision Sept. 16 against St. Louis when he pitched all seven innings in the opener of a doubleheader.

Cardinals: RHP Adam Wainwright (5-2, 3.05) has lost two of his past three decisions after starting the season 4-0. His last win came against Milwaukee on Sept. 16 during which he went the distance in the first game of a doubleheader.